If you’re like me you enjoy the holidays, but also cannot wait to put the holidays away. The new year is a time to toss that old detritus, chuck the tree, wipe the slate clean, and make resolutions–ways in which we hope to improve ourselves in the cold of winter, the dawn of a new year. In fact, this column was last year’s resolution. This year, at the very first sales of the new season, Janice and I saw what I imagined were a number of resolutions–promises kept, and promises broken.

Certainly there’s no way of really knowing a person’s New Year’s resolutions, unless they were written down, and in all my years I don’t know anyone that’s bothered to do that, not even on the all-knowing Facebook (except perhaps as a joke.) But look around you, and maybe, just maybe, in a person’s life’s accumulation we can see evidence of these goals.

Frankly, the sales were pretty damned weak–only three sales in the metro area on Saturday, two on Friday that were plain awful. The first sale Saturday was at a ranch-style home in southern Bloomington, one that resulted in a single Life magazine from 1938. And yet, this Life had what might just be one of the best advertisements I’ve ever seen. 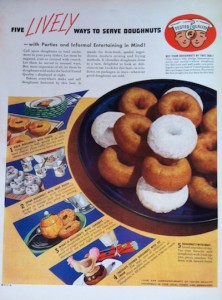 For doughnuts. Doughnuts? Yes, friends, we all know how important doughnuts are to our diets. “Call upon doughnuts to lend excitement to your party dishes. Let them be sugared, iced or covered with crunch. Let them be served in unusual ways. But, most important of all, let them be doughnuts sold under the Seal of Tested Quality!” (Italics and exclamation point mine–and you’re lucky I used only one.) Yes, that strangely Old Testament style syntax is meant to generate excitement about the doughnut, which apparently had been facing such lackadaisical standards that they were worthy of exposure in an Upton Sinclair novel. 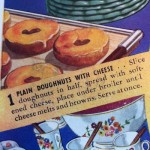 The Chefs butting heads in the upper right hand corner of that ad are the “Seal of Tested Quality”, and to the left there are a variety of wonderful suggestions. You know, like “Plain Doughnuts With Cheese” (left.) Slice in half, melt cheese on each end. You know, because that’s apparently better than those damned ethnic bagels.

I love the fine, fine print in the lower left corner of the larger ad (which you probably can’t see in the image): “Look for announcements of tested quality doughnuts in your local stores and newspapers.” “Can I help you, ma’am?” “Yes, I’m looking for the doughnut announcements?”

Resolution for 1939: Only eat the finest doughnuts recommended by the Seal of Tested Quality. 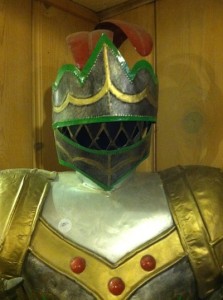 From there we headed to another Bloomington ranch-style home, this one in a depressing neighborhood that faced the back of what looked like a factory, or an industrial complex. This one had a line even at 11:00, though once inside it seemed as though the people running the sale were simply afraid of any kind of crowd–the place was empty. But I did hear one woman in line exclaim “I want to see the suit of armor!” 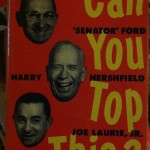 This was a good sale to practice my own resolution, that is, to buy less crap and just take pictures. This was the home of a gent who loved his Ham radio (see below), loved to make and display model ships, loved to read books about his favorite entertainers, and loved to have garbage like this cheap suit of armor, which, as you can see, was still standing around at $125 (not worth half that.)

Now, I could have walked away with a bunch of strange volumes like this one to the left, Can You Top This?, which was written by three comedians, in full-throated laughter, including “Senator” Ed Ford. There were also four shelves of movie star bios, including a beat up copy of Ladd, the biography of Alan Ladd. Normally, you see, I might have emerged from this sale with an armload of books like these (and Harry Herschfield’s Laugh Louder, Live Longer, which might have been the homeowner’s resolution one year.) Or bought, on the cheap, some kid’s homage to John Wayne Gacy (the creepy clown sculpture at the top of this piece.) Or maybe one of the many cool Bakelite radios that probably didn’t work. Instead, I walked away. I just walked away. 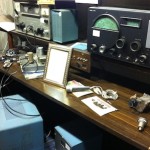 This property, once owned by a gent named Alden, seemed to be the place where a fellow could go to relax and have a good time. Provided hanging out in the basement with ship models and Ham radios and jokes aplenty were your idea of fun. Personally, I think it might have been a good time loafing with Alden. I wondered–did he work for American Breeders Service? There was a 1981 Beef Directory in his basement. And ABS, as you might know if you ever took I-90/94 to Chicago or points East, is the place that has that sign with all the silly puns about breeding cows. “Our genes don’t fade,” claims one sign, that the company calls “bullboards” (har de har.) My favorite, from this article, is “ABS–The Champagne of Bottled Bull.”

With so many joke books laying about the house, was Alden one of ABS’s jokemeisters? Did he try out his groaners on a wide Ham radio audience?

Emerging from his home with nothing but a couple of trinkets for Janice, I was pleased with myself for sticking to this year’s resolution: cut down on your books and trinkets. 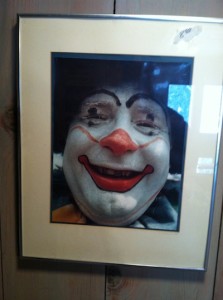 From there it was off to Deephaven, and the not-so-modest home of a daredevil skier, boat racer, raconteur, and possibly creepy clown (left–what was the deal with creepy clowns this weekend?) Again, not a lot to go by here, though I could’ve scored a poster from the 1980 Summer Olympics in Moscow, you know, the one we boycotted. This gent had tons of books, lots of coffee table tomes, dull fiction, and, tucked behind a bunch of skiing and boating volumes, a book on growing marijuana, which wouldn’t have been hard to do out there.

Maybe it was hidden away because our man secretly promised his wife and kids he’d give up the bong hits?

Whatever. All I knew was that I wandered out with nothing, which was great because I don’t need more shit, especially after a Christmas reading the new Pogo. In this, the dawn of the second year of Estate Sale Confidential, I’m hoping to unearth some more intriguing characters, broken and bizarre items, and odd collectibles that aren’t worth collecting, from the distant and not-so-distant past. Thanks for one year of reading, and I hope you enjoy one more.

by Peter Schilling Jr. Posted on January 8, 2013
This entry was posted in Estate Sale Confidential. Bookmark the permalink.