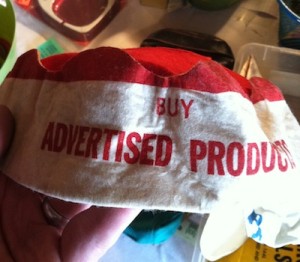 If you’re like me, you gripe endlessly about advertisements. I’m not the type who sits through the travesty of each year’s Super Bowl in order to watch some idiots make themselves appear even more inane by fighting over a bag of Doritos (and many, many other products.) Advertisements are irritating; their intent is to make you hate yourself; they’re often a blight.

I say ‘often’ because, after all, there is something to be said for advertising. Whatever your favorite movie is for any given year, chances are good, if not great, that you went because it was advertised. How do I know a restaurant is any good? Advertising. And don’t make the mistake that reviews of diners and motion picture shows aren’t advertising, because they are. They most certainly are.

Advertisements aren’t limited to commercials, of course. There’s also “trinkets and trash” (among others.) My neighbor worked for a company that sold, in their own parlance, “trinkets and trash”–worthless stuff that people held onto because they were, well, free, and made to be free because it advertised something. You can see this every year at the State Fair, where people wander about with yard sticks to add to their already excessive yard stick collection (which I also find regularly at estate sales.)

This weekend’s sales were dismal for the most part–a great, big sale full of worthless books and overpriced Beatles stuff in St. Paul, and a couple in Minnetonka and Minneapolis that yielded nothing. But is was the sale in St. Louis Park, the home of one Mr. Fink, peddler of trinkets and trash, that caught our eye.

Mr. Fink’s home is spacious rambler, and filled with the detritus of what I assume was his career as a salesman of trinkets. Considering the idea behind the merchandise is that people will take anything for free, and, consequently, keep said item (and thus stare at the ad, ad infinitum), it makes sense that he would also keep piles of this junk around as well. My first find was a box filled with metal engraved stamps, with logos for various companies. What were these used for? Newspapers? To adorn letterhead? 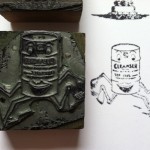 I bought a few of these, since I think they’ll make cool stamps for letters and such. Like this weird can of cleanser, running with strangely detailed feet and knobby kneed legs. Usually these things are made of rubber, which leads me to think maybe this was for a newspaper’s advertising department. But what exactly is this cleanser advertising?  (NOTE: Closer inspection reveals this to be a barrel of Grace-Lee cleanser.) Set aside the fact that it looks like a 30-gallon drum of cleanser, why is it running? To, or from someone?

I walked away with stamps for Jackson and Sons Elevator Contractors and another for the Sagebrush Motel. If you get letters from me in the future, expect to see a hello from the running cleanser man.

Of course, there were tons of pens–those old, ballpoint numbers with the metal pocket clip, with a company name etched on them. There were rulers and straight edges, and this sampler (right), which I image Mr. Fink used to show prospective clients.

There’s a plethora of junk that a business can hand out in an attempt to get people to care about his or her business, from rulers to pens to pocket protectors to pads of paper and on and on and on. Had that been all that Mr. Fink had in his quiver, I probably wouldn’t have given this place a second glance. 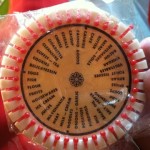 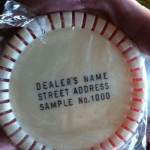 However, it was the weirder items that caught my attention. Like this grocery reminder. This little disk, which looks alarmingly like it’s for your birth control pills, allows a person to have a permanent grocery list, and check off what you’ve purchased in a convenient little plastic thigamajig. I like how there’s one for “Meat”, and then there’s also one for “Bacon”, which is exactly how it should be.

Of course, you can put your grocer’s name on the back, probably with a logo, say, of a giant running drum of cleanser. 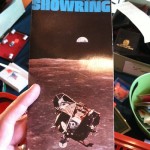 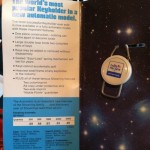 How innovative, you say? I’m guessing you don’t say, but allow me to put words in your mouth. Making a permanent grocery list wasn’t the only hi-tech item in Mr. Fink’s vast reserves, no, there was also the “automatic showring” (left and right.) This is, folks, a key chain. That’s it–a key chain. Oh, but before you scoff, look–it has a picture of an Apollo spacecraft on the front of the brochure! “Heaviest steel frame of any keyholder in the industry!” the brochure crows. Plus–PLUS!–a bevy of features you’ve come to expect from the Showring brand.

I can just imagine this gentleman hauling briefcases full of these brochures around, shaking his head either that his prospective clients just don’t get how great these keyrings actually are, or the fact that he has to pretend that there’s any keychain on earth that demands this kind of promotion. I’m guessing it was a little bit of both. 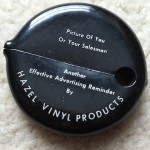 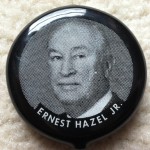 I was very happy to find a small box full of little plastic change purses–these are damned hard to find nowadays… and why? I have to digress a bit here. Coins are not like pay phones and beepers, folks. People still use coins, why don’t they use coin purses? I’ve got one, and I swear cashiers comment on the damn thing virtually every day. Gripe, gripe.

Anyway, the purses were cheap, and had the usual assortment of ads for a German restaurant, a bar, a liquor store. Ah, but here’s a unique one–perfectly round (usually they’re oval), and with an image of your salesman on the back! Honestly, that’s pretty weird. The good folks at Hazel Vinyl Products, probably looking for ways to expand their lucrative coin purse holdings, came up with this idea, or the salesperson of the trinket and trash company (Mr. Fink) suggested such a thing, kicking off with a picture of none other than the head of Hazel Products, one Ernest Hazel Jr.  If it were me, maybe I’d put a picture of Clark Gable on the back, rather than the frumpy head of a vinyl products concern.

Before we start to paint Mr. Fink as the latest incarnation of Willy Loman, I guess I’d have to say that the salesman seemed to live a good life. There were books all over the place, his house was in great shape (a bit out of style, perhaps), but he certainly seemed to have enjoyed living–there were also pictures of family around, and obituaries of his wife (I’m not sure he’s passed) indicate the presence of friends and family. That’s a great life.

And it reminds me of the amount of work that goes into even the tiniest, most insignificant products you might see. Go into any store, say a liquor store, and everything is manufactured, everything is sold. Salesmen and women have their fingerprints all over that place. Someone designed, manufactured, and sold the little cardboard box that holds the free Minnesota Twins schedules on the counter. The matchbooks they give away, the bags with their logo on them, the beer can coolers, every display, bottlecap, bottle, sticker on the freezer window, welcome mat with the PBR insignia, Under 21 calendar… every single thing, writ large and small, probably bounced around as a sample in someone’s worn suitcase, the essential prop to a pitch that would promise financial bonanza… both for the client and the salesperson.

I respect that. I really do. But I can tell you that there might not be any job out there that appeals to me less than that one. 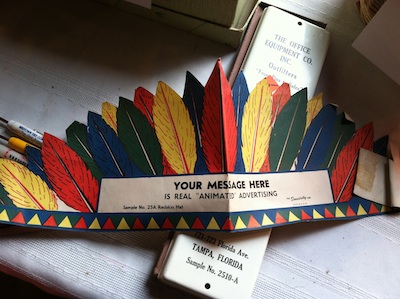 by Peter Schilling Jr. Posted on January 28, 2013
This entry was posted in Estate Sale Confidential. Bookmark the permalink.