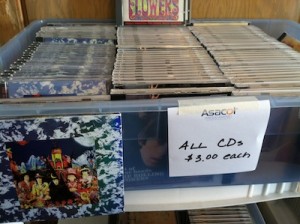 One of the themes of Estate Sale Confidential, as you may have noticed, is the desire in us all to collect things. Honestly, do you know a single person who doesn’t collect something? I can think of no one in my life who doesn’t have a small cadre of trinkets, of records or books or baseball caps, a pile of extra china that they never use (but adore), a stack of those National Geographics they can’t throw away… hell, anything and everything can be collected.

But this weekend we found a strange sale, the home of a gent who died and whose collection baffled the customers and most of the salespeople. And it wasn’t until the very end, after I had paid for my haul and asked the cashier about the client, did I receive the whispered answer: “He had a mental illness…”

As of late, the estate sale circuit has been bereft of, well, sales, but also of sales that have any kind of story. It’s been a weird few weeks, folks, for myriad reasons, and these columns might get a bit sparse for a bit. This weekend saw a few sales, nothing to write home about (we did miss a couple that looked promising, and we missed them for personal reasons), but this weird one gave us pause.

We wandered to Minneapolis’ Wenonah neighborhood, that land of sound-insulated bungalows off Highway 62 and where airplanes roar by about every minute. This was a smaller house, ticky-tacky brown mustard-yellow home that had seen better days and probably hadn’t had work done since the Reagan years. But it wasn’t terribly run down–someone flipping the place would shove in new stainless-steel appliances, paint it, slap down some carpet, and the leave the rest to a buyer’s imagination.

And inside the living room, there wasn’t a lot to go on, either. A couch, some trinkets, coins and a basket of Disney comic books from the 198os. The kitchen had the usual cheap pans, dishes, Tupperware, and cutlery. Wander into the back bedroom and it was just your usual Rolling Stones museum. 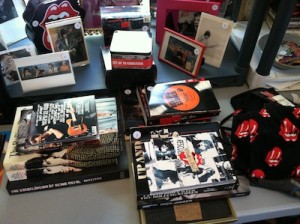 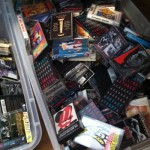 Yes, a Rolling Stones museum. Or rather, collection. As you can see from the photos, the dude collected all things Rolling Stones–cassettes, CDs (no albums, in part because I think the dude got started in the 1980s, when they were hard to come by.) Piles of cassettes, a box of 8-tracks, DVDs, VHS tapes, books, posters, postcards, ties, trinkets. Look in the box and you’ll see even those albums with only the most tenuous connection to the band–the Ruthless People soundtrack has a Mick Jagger song on it (“Ruthless People Theme.” Guessing that’s not a classic.)  Not all that strange, as I’ve seen people with weirder collections (seen Dolly Parton, Beatles, Eagles, Johnny Cash, and others…) 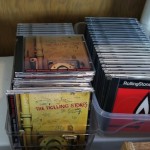 What made this collection weird was, well, look for yourself. Yes, that is a plastic tub containing roughly 20 CDs of the Stones’ “Beggars Banquet”. Virtually every single Stones’ album–and many Mick Jagger albums, a couple by Charlie Watts–but each one had a dozen or two or three copies. All unwrapped from their plastic, in great shape, and organized (the deceased had done his own organization.) This was late in the day, so who knows how many had been sold. For Christ’s sake, there were five of those Ruthless People cassettes in the box, at least by my count. 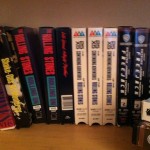 Wander down the hallway, past the Rolling Stones poster, and in the linen closet, there’s a whole wall full of Rolling Stones related videotapes, including multiple copies of the classic film Freejack (shudder.)

I like the Rolling Stones, but not enough to tap into this guy’s swag. Instead, I headed into the basement, and that’s where I found my treasure.

The basement was clean and must’ve had a dehumidifier running regularly–the place smelled clean, not of mildew, which is the bane of basements. There were books everywhere, and toys. “Was he a collector?” one of the salespeople muttered. “He’s got the same stuff, over and over.” Tons of Beanie Babies in their packaging (but you see a lot of that), and lots of plastic toys of animals, Donald Duck and Mickey Mouse, duplicates.

The shelves and shelves of books didn’t include duplicates, but it looked as if he liked something he got a lot of them. There was a whole tub of pristine Mad Magazine paperbacks. As I said, he must’ve been around my age, maybe just a bit older, because these were from the early 1980s, and appeared as if they’d been read but once, if at all. 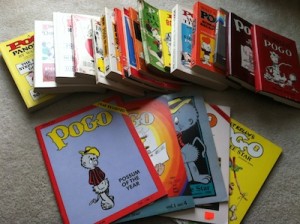 Then Janice tapped my shoulder–there, on one wall, was a whole shelf dedicated to Pogo reprints. Zowie!

I love Pogo. For a time, Pogo was one of the most popular comic strips in the United States, especially in the golden years of the 1950s and 1960s, when everyone, it seemed, spread the newspaper on the floor and devoured their favorite comic strip. Pogo the possum, Albert Alligator, Howland Owl, Churchy LaFemme (a turtle), Beauregard (a huntin’ hound dog of little ability and much self-pity), grouchy Porky Pine, and the three bats, Bewitched, Bothered and Bemildered, my favorites. Pogo was known for its eye-rolling puns, its political commentary, and its myriad in-jokes and literary references. Each panel is rich with detail, from the Spanish moss hanging from the trees to the insects crawling about happily in the background, to the tines on the porcupine, Kelly was a master.

Fantagraphics has seen fit to begin a nice stretch of reprints, and that will best this collection, I’m sure (Fantagraphics does everything right.) But the Pogo reprints were hugely popular, and often broke from the strip to tell weird little stories, include songs, poems, and rhymes, essays about Kelly (especially after he died in 1973) and more. Pogo, you may know, is the one who muttered that immortal line “We have met the enemy and he is us,” and Kelly used that in various posters he designed for the first Earth Day (Pogo made that remark about the trashing of his precious Okefenokee Swamp.) But it also includes some amazing lines like, “I may not understand what you say but I’ll defend to your death my right to deny it!” That’s Albert Alligator in a segment about politics and lynching.

Pogo is an amazing strip, and one that rewards further research and reading. It also rewards the man who loves the strip and finds a cache of Pogo reprints from the late 1970s (and all seven issues of the Okefenokee Star, a fanzine from the same decade.) Two of these were rare–the hardcovers are being sold on eBay and Abebooks for upwards of $70 (which means I can list them and wait five years, discount them to $30, and maybe make a sale in another year).  The rest, the paperbacks, were published en masse and go for about $1.50, which is a buck more than I paid for them. I snagged 23 books for ten simoleons. Pretty good, especially for this Pogo child. 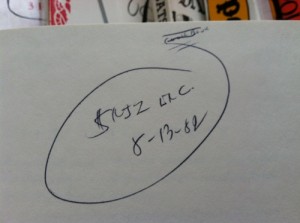 But I have a theory about these books, which, like the Mad digests and other titles in the basement (and the Stones’ albums upstairs) were in perfect shape–they appeared as if they had never been read. Some were clearly new at purchase and put gently on a shelf, a couple others had handwritten prices on the inside cover. And each Pogo book had the following inscription inside, I’m guessing written by the person who owned them. I can’t read it at all–”$RJZ ERC”? With the date August 13, 1982. Above, in very small, pinched lettering, is the word “cookbook”, crossed out. This inscription, including the big circle, is in every Pogo book.

If I had to hazard a guess, I would imagine that this kid, or adult (I have no idea how old he was at death) may or may not have ever read Pogo. He may or may not have enjoyed or adored or was indifferent to the comic strip, which ended for a time at Walt Kelly’s death, but was revived in 1989. If we are to believe the date (and who knows what it really means), then these were all purchased in 1982.

The cashier told me, in a whisper, of the person’s mental illness, that his folks had died a long time ago and left him with a batch of money. Again, if this is true, I wondered to myself, maybe he would just go and buy up shit. Maybe he wandered into Schinders, saw their impressive comic book section (bigger than any other bookstore), maybe saw Pogo for the first time that day, and bought out their inventory. I know he liked animals. Then perhaps he came home and promptly shoved it on a shelf, much in the same way he seemed to have emptied local stores of their “Steel Wheels” CDs (inexplicable but for mental illness.)

I hope this all made him happy. I hope it was more than just some form of OCD run rampant–the Pogo strip deserved to be enjoyed. If not, obviously I don’t hold it against him, and I’m pleased as punch to take it off his hands.

But I also thought to myself–how long will it take me to read these things? And: aren’t I already committed, at least in my head, to buying the full Fantagraphics run of Pogo? Yes. Why do I need all these Pogo books? Why do I keep buying Mad digests, or books by the dozen… you know, that I come home and shove on a shelf?

Perhaps some day, after I’m gone, someone will shake their heads at my book collection, and the person in charge of my sale will lean in conspiratorially and whisper, “He had a mental illness…” 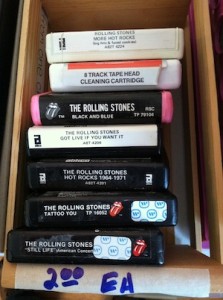 by Peter Schilling Jr. Posted on February 18, 2013
This entry was posted in Estate Sale Confidential. Bookmark the permalink.

One Response to Estate Sale Confidential: “He Had A Mental Illness”