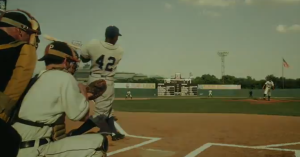 To suggest that bad people were racist implies that good people were not. –Patricia A. Turner, Dangerous White Stereotypes, a commentary article in the New York Times about The Help.

If there’s one thing I took from Brian Helgeland’s hagiographic 42, it’s that Jackie Robinson wasn’t actually a real person. Like the computer generated baseball diamonds that appear as if they were freshly painted in oils on a giant canvas, this Jackie Robinson is all shiny nobility, standing in the face of scowling, beer swilling southerners. That his life was perfectly delineated between those white folks who wanted him out of baseball and all the good ones who helped him along. Like a desktop calendar, lessons were learned every single day.

Clearly, director Brian Helgeland, who won an Oscar for the screenplay to L. A. Confidential and has done virtually nothing of value since (though there are apologists for Payback), loves the Jackie Robinson saga, as do most baseball fans who follow the sport’s history. But anyone who takes it upon themselves to read the Robinson story will delight in the complexities of the man. Robinson the Republican, the competitor who couldn’t lose card games to his teammates, the man who couldn’t fight back and then, when he could fight back, became such a vicious competitor that some players and sportswriters even came to dislike him. Robinson who clashed with Malcolm X, who closes his autobiography saying, defiantly, “I was a black man in a white world. I never had it made.”

There’s a difference between loving a story and actually showing respect for the same. A great story is nuanced. Problem is, Jackie Robinson’s in 42 isn’t even a good story, it’s a hackneyed, clumsy baseball movie that doesn’t even get the baseball scenes right.

First of all, let me admit that I’ve read at least six books on Robinson myself. The year that Robinson broke into the majors, 1947, is one of the most bizarre seasons ever (and documented brilliantly in Red Barber’s 1947: When All Hell Broke Loose in Baseball) and its complexity simply couldn’t be truncated to fit into a two-hour movie. Furthermore, I really wasn’t interested in seeing this tale brought to life with every damn subplot examined in full detail. I understand the limitations of a two hour movie. This is the story of Jackie Robinson’s heroics, not a clinic on covering every nook and cranny of a baseball season.

Problem is, Robinson’s heroics are a hell of a lot more intense than you get in 42. From the beginning, when Robinson demands that a racist Souther gas station owner allow his team to use the restroom, to the taunts of Phillies manager Ben Chapman from on the field (not allowed), to the warm conversations between Branch Rickey and Robinson (“you made me love baseball again”, probably not something Rickey ever said), Robinson never fought racism, he just fought racists.

That’s a problem. Actually, there’s two major problems with 42 (and a ball bag full of minor ones), and the first is this shying away from racism. The quote that opens this piece is from a brilliant essay on the movie The Help. Dr. Patricia A. Turner argues, effectively I think, that in movies like The Help (and here, I think) good white people were “victimized” by the racists of the world, unable to act on their noble virtues because of these evil freaks. That in the 1950s, the world was made up of noble black folk, good whites who liked them and cared for them as people, and evil racists who seemed to control everything. That’s patronizing and wrong.

“Jim Crow segregation survived long into the 20th century because it was kept alive by white Southerners with value systems and personalities we would applaud,” Turner writes. That was true in Robinson’s day. Let’s not forget–organized baseball, you know, the one with the strict color barrier, was run by northern men.

42 takes this as far as George Foster home run, implying that the worst of Robinson’s abuse comes from beer drinking rubes. Even Happy Chandler, the Southern Commissioner, is presented here to suggest that he wanted to throw a wrench into the works of Rickey’s “Noble Experiment”, when in fact it was his imprimatur that allowed Rickey to go ahead. (In the movie, Chandler suspends manager Leo Durocher–while the Commish is getting a manicure, showing his indifference–for sleeping with a man’s wife.)

42 is really nothing but a series of important moments stitched together to create a narrative of heroism. But the movie can’t even get the heroics right–for starters, the baseball scenes seem small, every hit and great play squeezed into a world of one or two players, too many harsh closeups and no sense of the game, or the season, as a whole. When the Phillies Ben Chapman begins to ride Robinson mercilessly, a famous scene rendered dully here, Helgeland can’t seem to do anything other than cut between shots of Jackie, Chapman, or the two of them. When Robinson waits on a pitch, and Chapman starts taunting him, the fans in the crowd come to a thick silence. When does this ever happen in a ballpark? When it gets to be too much for Robinson, he runs down to the tunnel to the locker room and breaks his bat in frustration–which never happened–and begins crying until he’s comforted by Rickey, who just appears. In reality, Robinson actually bore all of this quietly, tensely, a tension that many people felt killed him. Even if not in reality, making him come away and begin weeping drains the tension away. Worst of all, as this dialogue occurs, again the crowds are silent, the play appears to have stopped. What the hell?

The second concern I have about 42 is that it leaves people thinking of Jackie Robinson as a one-sided saint who spoke quietly and suffered racists quietly, doing only as he was told. True, Jackie didn’t fight–but this should add to the considerable tension. This whole movie I yearned for the intensity of, say, Michael Mann’s The Insider, where one man carried the weight of the world on his shoulder. I remember a scene, a simple scene, with Russell Crowe’s Jeffrey Wigland walking on a dock by the ocean. That movie gave me a headache, in part because every minute of that long film was so wrought with tension, a tension that came from Crowe’s performance, which showed his character’s self-doubt in every subtle movement.

Here, Jackie is a strong man, who breaks down when taunted, and is comforted. He is the pinnacle of strength. There’s hardly any tension in the movie, in part because the racism here is in small bubbles. As Dr. Turner points out, Robinson would have felt this every minute. In The Insider, Wigland’s assailants hovered over every frame of that picture. In 42, bad guys taunt him, good guys admire him. In a scene that’s like something from Major League, they even want to take showers with him.

Leaving this aside, 42 is just plain mediocre. The stadiums look computer generated (compare them to the stadiums in The Natural, with their deep shadows, long tunnels, and multiple shots in the bleachers and grandstands–so wonderful in that mediocre film.) Beyond even the technicolor stadiums, Helgeland can’t seem to get a lot right. The press box has but five guys plugging away, and the stadiums always seem woefully undermanned. The performances are routine–Chadwick Boseman is fine with what he has to work with, though of course the filmmakers shy away from Jackie’s real voice, which was high pitched and polite, and not gruff like Boseman’s. Harrison Ford’s Branch Rickey is all huff and puff, which is kind of how I imagine “the Cave of the Winds” (a reporter’s derogatory nickname for Branch) would sound, but he does little else with this complex character. As for everyone else–good guys and bad–they either chew the scenery in their evil or bat their eyes in kindness.

There are a few moments in 42 where the honesty of Rickey’s “experiment” are revealed–that this was, at bottom, a great way for the Dodgers to win pennants and fill the stands for very little money. Personally, I don’t see a lot wrong in that–it was daring and risky, and Rickey and the Dodgers deserved financial renumeration for the job they did (even as it destroyed the Negro Leagues.) The Dodgers wanted to integrate because integration was good for the bottom line. So it goes for 42–a movie this easy for white audiences to digest is going to be on more sound financial footing than one that makes us emerge from the theater wondering to ourselves if Jackie’s legacy is being honored today. But I think he would have wanted us to feel challenged even now.

42 is going to impress a lot of people because people, especially white people, because a lot of people want the very simple Jackie Robinson story. We tell ourselves that if we were around back then, we wouldn’t have been a Southern, tobacco-chewin’ racist. But are any of the white folks who see 42 certain that we wouldn’t be an indifferent northerner, sitting on our hands and not demanding change? 42 ignores the fact that the worst racism was from the North–in Boston, Philly, New York, the cities where baseball was played. That it was the northern commissioner Judge Kenesaw Mountain Landis who kept blacks out of baseball, and the southern one, Happy Chandler, who gave his fervent approval. That Robinson died dissatisfied at the progress baseball had made.

Sadly, the Jackie Robinson in 42 wouldn’t say “I Never Had It Made”. He doesn’t actually say a whole lot, really. Nothing we don’t want to hear.

by Peter Schilling Jr. Posted on April 12, 2013
This entry was posted in Baseball and tagged 42, Jackie Robinson. Bookmark the permalink.

One Response to White Man’s Jackie