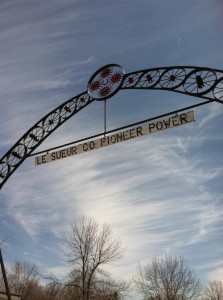 Winter has just about killed me. Minnesota winters are typically long, but this year’s edition was fairly epic. Just a week ago we had about three inches of God damn snow, and by that time I’d just plain given up on shoveling. The freakin’ sun can shovel for me, thank you very much.

So this weekend’s sudden sunshine was a welcome break from this evil condition. Temperatures in the 70s, snow’s pretty much all melted, no leaves on the trees and the grass is still dead, but that’s just fine as long as there’s sun. And to celebrate the weather even more, I eschewed the usual estate sales and headed south, to Le Sueur, Minnesota, to a tract of farmland with Mayor Mike Haeg, his dad, Tom, and daughter, Autumn, to take in the Le Sueur Pioneer Power Swap Meet on Saturday.

The Le Sueur Pioneer Power Swap Meet is an annual event, now in its 36th year, in which men and women from all across the country empty out their sheds and barns and drag machine parts to sell and swap–rusty chunks of iron, gears and axles and engine blocks, for such obscure and not-so-obscure companies as Rumley and Farmall and International-Harvester (Farmall is I-H, but whatever.) Now, if you know me, you know that I’m not mechanically inclined, nor am I a person who would ever think of riding a tractor, much less repairing one. But the Pioneer Power Swap Meet sounded intriguing. For one, it was a good jaunt with the Mayor, there would be a pancake breakfast (with freaking huge sausages), and there’s also a flea-market element to the thing–vendors selling everything from toys to books to baseball gloves and beyond. 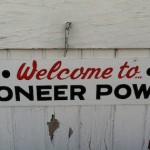 We arrived early, at 7:00. The Pioneer Power Swap Meet sits in the middle of miles of rolling Minnesota farmland. The Le Sueur County Pioneer Power Association is a group of like minded men and women, mostly if not all farmers, who work to put on shows and Swap Meets, and banquets throughout the year, celebrating farming equipment like we’re about to see. Most of the volunteers we encountered were old men and women, but as you’ll see they were definitely not the entire demographic here.

This is actually a really strange and lovely time to go driving: the farmland is brown and black, the earth having just been turned over and looking as rich as German chocolate cake. The Meet is, I would guess, about a quarter of the size of the Minnesota State Fair, which is to say it’s huge (it’s like saying I found a dog a quarter of the size of an elephant.) About the size of a good county fair, perhaps. Anyway, we drove past a line of cars leaning on the shoulder of 265th Avenue (the Swap Meet address) and then bumped over the dirt parking lot to our spot. 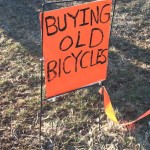 From there we wandered past the vendors just starting to set up, past an orange sign reading “Buying Old Bicycles”, which surprised me–I saw this as a collection of people who loved the old, internal combustion engines. Not so: in fact, Tom bought a bike just the night before (and Mike found a patch that read “Dirty Old Men Ride Bikes Too” for him.) Already you had dozens of men and women perusing the grounds on foot or by golf cart (which anyone could rent.) It was a beautiful morning, a bit cool, and there was already a line of about fifty people waiting patiently for cheap coffee and hot pancakes. And I will say, after having chowed on this heavy meal, it was the perfect fuel for a day wandering these grounds. 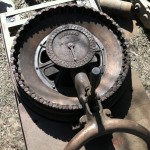 The Swap Meet was set up like a fair–dirt roads surrounding grassy patches where vendors set up shop, with a few permanent buildings housing the Pancake House and the Threshers Kitchen, where we ate lunch. The place was mostly out in the open, like a corn field, though one end was in the tall trees (including the Pancake House.)  Mike had a good friend, Dave, who, with his daughter, Izzy, was selling all manners of cool junk, and who’d spent the night in his trailer, heating it with a cool little wood-burning stove that used to be in a caboose. “Fifty bucks!” he said, which was great since he’d seen one before that was going for twice that. Dave is a mechanic, and would find old engines to sell, not for a lot of money, but he was there trying to unload a Harley-Davidson and an old scooter. Dave is a magnificent storyteller, who gave me some good coffee and told us about his exploits selling old parts to a Mennonite, and how later this old lady told him “I WILL get this engine” for $50 when he wanted a hundred. She won. “I knew she would,” he admitted. 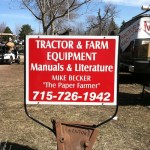 Mike, the kids and I began wandering through the flea market part of the sale, looking for decent trinkets. It was pretty cool, though not a good place for books. I didn’t need any books as I’d spent three weeks of this sabbatical working for a friend’s pop-up bookstore, and came away with about three dozen titles, but there wasn’t much that would’ve interested me anyway. Everything was still focused on the man and woman in the farming trades, so you’d find not so much great literature as a guy selling tractor and engine manuals. Such as this tent, filled with boxes of old manuals–Mike Becker, “The Paper Farmer”. So amazing. 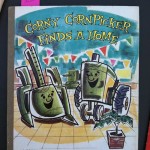 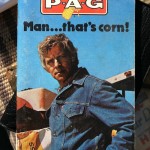 You’d also find crazy stuff like this weird children’s book: Corny Cornpicker Finds a Home. “A John Deere Storybook for Little Children”. Oddly enough, as I was looking this thing over, a teenager wandered by with a John Deere tattoo on her leg. Maybe she’d been a fan of old Corny back in the day. The paper was really great–weird postcards (including a sale with religious items and a box full of Space Shuttle postcards), brochures (including the impressive “Man… that’s corn!” one to the left), and I even snagged a pair of Life magazines, one with Mickey Mantle and the other Don Drysdale on the cover. I read them and threw ‘em away, as they stank. But for fifty cents I’m not complaining. 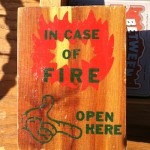 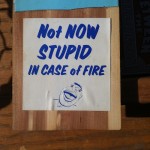 There were trinkets galore, and Izzy and Autumn came away with some costume jewelry, Mike found that patch, and I got a couple of postcards from the Missouri-Texas-Kansas Railroad, and a domino set from the Alton and Southern Railway for my brother. There were belt buckles, matchbooks, maple syrup, an old Mike de la Hoz baseball glove in pristine condition, children’s baseball bats with the signatures of Pete Rose and Al Kaline (all busted up though, and $30, firm), tow straps, knives and guns, fireworks, bikes and bric-a-brac, and of course all manners of machines, engine parts, tools, and more. Perhaps my favorite item was this: two pieces of wood attached with a hinge. “In case of FIRE, open here.” Open it up: “Not NOW STUPID–in case of fire!” Har de har. On the back: “Not for sale.” Bet he woulda taken five bucks.

And all the while there were people on machines. This wasn’t like the fair in the sense that there were thousands upon thousands of souls wandering around in packs. No, you had people walking–like us–but you also had people in those golf carts, and dudes riding around on mini-tractors, on riding lawnmowers, each with a little trailer they’d use to haul their stuff around. A lot of this stuff was heavy–engines and axles and etc.–and a few kids made some money hauling stuff to cars and trucks for customers. Some kid, a teenager, was trying to impress the girls racing around on a motorbike that couldn’t have been more than ten inches high. I was at a loss as to what kind of girl would find that attractive, but to each their own.

Perhaps the best buy of the day was Mike’s purchase of a “beginners” ventriloquism dummy for Autumn. She went nuts for it, and they later bought a baby’s Oshkosh overalls to put on old Charlie. (NOTE: A beginner’s dummy only has mouth movement. Later dummies will have ways of making the eyes, head, and arms move.) Autumn and Izzy put on a show in front of Dave’s spot, Izzy on Harmonica, and Autumn telling jokes like “Why did the chicken cross the road?” Dummy: “I don’t know!” It looked like they made about ten bucks in tips from passers-by who watched the Autumn and Izzy Show.

After lunch, we wandered the far reaches of the Swap Meet, under the hot sun (I ended up with a red neck), and where there aren’t any trees. Here were the serious traders. Old tractors, guys wearing “If It Ain’t Red, Leave It in the Shed” shirts, a reference to International-Harvester’s Farmall brand of tractor. There were rusted old tractors on flatbeds, most of which were already sold, and I was stunned at how inventive these people were. I mean, there were tractors, the kinds with the old iron wheels, that not only looked as though they’d been left in the rain for eight decades, but as though they’d been dropped repeatedly off a high cliff. And yet I heard guys talking about restoring this or that–rust and dents and wrecked bodies weren’t going to get in their way.

The key for these guys is to get these things working. And some of them prefer the old tractors to the new ones. It’s not simply a matter of restoring something old and pretty and leaving it on display in your driveway, or hauling it somewhere just to show off, a la those old car shows (and there’s nothing wrong with that, either.) No, there was an element of simple preservation, but there’s also an element of making these machines run again, and work again.

That was one of the profound beauties of the Le Sueur Pioneer Power Swap Meet. This wasn’t just an exercise in nostalgia–though that was there–it was an exercise in using your brain, working with your hands, making old stuff work again, and then fucking using that thing. Which is, to me, wonderful.

Furthermore, the Swap Meet was nothing but a positive place to spend a Saturday. I don’t know how many of these guys voted, but virtually no one wore shirts that professed a hatred of Obama, not even a pro-flag, anti-burning shirt (“It wasn’t earned to be burned!” is a shirt I’ve seen in the past.) Even at the State Fair you get politicians. It truly felt as though you could leave the negativity at bay out here, and just chat and laugh with young and old (and it did have about the most diverse age group I’d seen), men and women, and even this all-thumbs mechanic never felt intimidated. Out in the sun, the smell of rust and turned earth, your muscles aching from all that walking–it was joyous and healthy for the soul. Even if that soul doesn’t know a God damn thing about tractors… 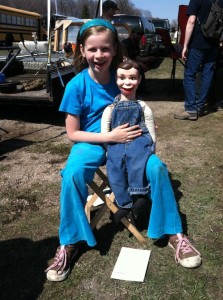 by Peter Schilling Jr. Posted on April 29, 2013
This entry was posted in Estate Sale Confidential. Bookmark the permalink.

One Response to Estate Sale Confidential: Pancakes, Iron and Diesel