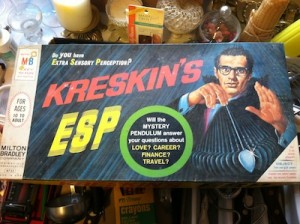 With the holiday season bearing down on top of us like a Hummer in Trader Joe’s parking lot, I thought that now’s the time to write a little piece about gift giving. As you well know, newspapers and magazines fill their pages with the usual gift giving ideas–in fact, I’ve written one myself for a sportswriting concern But who needs an article to show us the supposedly cool crap we can buy in any store, at any time? The best gifts are weird gifts in my mind, gifts that make a person really think about what kind of person you are, gifts that show that you’ve made some kid of crazy journey acquiring said trinket, that it wasn’t easy.

In short, a gift from an estate sale!

This weekend, Janice and I hit four sales, all four in Minneapolis, and all of them had some pretty awesome gifts for that special someone in your life. Of course, it’s not like you can rush out and grab these things–the sales are over. My point is, next year get out to the estate sales. 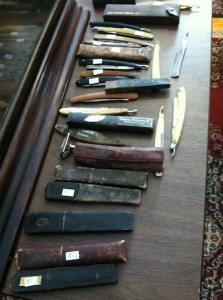 F’rinstance, say you’ve got a close friend or family member who is into straight razors. You know, maybe some dude got caught up in that sexy scene in Skyfall where Moneypenny shaves James Bond with a golden straight razor. Well, at our first sale, in the ECCO neighborhood near Lake Calhoun, we found the collection of a man who loved him some straight razors. Look at them! (Right.) I don’t know how you’d sharpen them (I didn’t see any razor strops), or sanitize them, or strip them of rust or corrosion, but for that gentleman looking for the perfect shave, well, you’ve got them something unique.

Or maybe you’ve a friend who’s into the Masons. Either as a practicing Freemason, carrying on the tradition of our founding fathers, or simply as a hipster into weird shit. Either way, our man on Lake Calhoun was a Freemason, and boy, did he celebrate this fact. Check out that cool wooden box, filled with membership cards of local Masons!

This guy totally loved his Freemason life, and celebrated it in numerous ways–with his membership and with these weird pictures, that I might call “Freemason Funnies”, like this one: “I Love to Love a MASON, ‘Cause a Ma-Son Never Tells.” I leave it to your imagination to determine exactly what is not being told.

Saturday found us in the East Isles neighborhood, in a stately home facing Lake of the Isles. This one was tagged as a book sale, and there were tons of books, a lot of former bestsellers (Time Travelers’ Wife, Life of Pi, etc.), and I found a neat trade paperback of Vonnegut’s Welcome to the Monkey House from the 1980s. But there were tons of gifts, too! Say, for instance, you have some racy adults in your life. At only two bucks, how can you lose? Well, you might lose, because this game, billed on the side as “the verbal charades game” (a contradiction in terms, boys) looks pretty stupid. But you certainly wouldn’t be the first to give a stupid gift, and this is definitely unique. Get it, and the ESP game (top–maybe to hypnotize that certain someone into bed?) and that’s quite a Christmas morning.

This was a sale with a ton of high-end stuff. A $250 white antique pram for your sweet baby? It’s there. Vintage cocktail shaker? In the kitchen. Fancy, hundred dollar meerschaum pipes? Right there on the rack. A box of booklets to CDs that aren’t for sale? Uh, well, yes. Tom Lehrer records? Right there in the box! What? You don’t know who Tom Lehrer is? Oh, you poor misguided children. Since I can’t get you a Lehrer record, here’s a stocking stuffer for you: 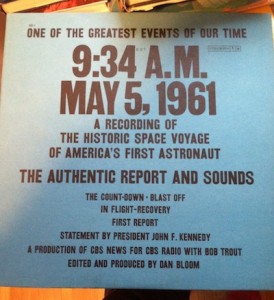 From there, take your shopping self south, to Minneapolis’ Armatage neighborhood, where we find a nice little split level with more bizarre shit for that friend who just adores bizarre shit. Like this LP, “The Authentic Report and Sounds of the Historic Space Voyage of America’s First Astronaut.” I actually bought this damn thing for two bucks, scratchy and dusty as it was, and I might even get to listen to this undoubtedly dull record someday. But if you’ve a friend into the Space Program, what could be better? Nothing. You know that.

For that gaming enthusiast–who doesn’t seek “verbal charade” sex board games–there’s this homemade cribbage set for only three bucks. Check it out: the “skunk” hole, where you put your peg if you lose by 31 points, is, uh, the little animals butthole. Cute. Or not. Certainly makes an interesting gift.

Our last sale was in the Fulton neighborhood, right on the edge of the city, literally a baseball’s throw away from Edina, and too near the 50th and France corner for comfort. This one had the coolest stuff, and the people who ran the sale seemed to know that. “Santa, We’ve Got You Covered!” is how the sale was billed on estatesales.net. Tons and tons of cool stuff, and a lot of great paper.

By this I mean it was a sale for that friend you know who loves old magazines and postcards. Cough, cough, hint, hint. Anyway, there were piles of beautiful Life magazines, overpriced that first day ($5 each–I nabbed ten the next day for ten bucks.) There was also this stinky Playboy from the 60s, featuring a nude pictorial of most of the Bond girls, from Dr. No to Thunderball (if You Only Live Twice’s Karin Dor had been in there, I might have bought this hateful, smelly mag.)

You know someone who adores champagne? How about this ridiculous Mumm Champagne bucket (right)? Or a cork for your wine that has a gentleman tipping his hat while riding a wine barrel? Maybe a booklet on the Fifth Column’s invasion of America? Belt bucket kits, old postcards, the most beautiful ties I may have ever seen at a sale… all ruined from being stuffed in the bottom of a bag for years, now wrinkled beyond repair. Can I get that gift wrapped?

I only bought a couple of items on that first day, then went back on discount day to plunder the Life mags. And it was there I found what will hopefully be a nice gift for one of two friends I know: a Lem Kaercher campaign sign (bottom.) This was in a pile on an attic bedroom, scattered among some U of M Strike signs and old newspapers covering Nixon’s resignation.

Lem was quite a fellow. A one-term state representative from Ortonville, MN (unaffiliated, yet part of a liberal caucus), he owned and published the Ortonville Independent, and was a friend of the hobo. According to the Milwaukee Road Heritage Center newsletter:

As a youngster, L. A. “Lem” Kaercher of Ortonville, Minn., asserted his individuality in a family of 11 children by running away from home several times to bum his way through the Dakotas, Montana and points west. His favorite mode of travel was by rail, either blind baggage or coal tender. Once, he recalls, he even rode the rods.

Thus he was enrolled in the fellowship of hoboes and introduced to mulligan, the mainstay of “jungle” meals. The youthful adventurer found the concoction of scrounged vegetables and bits of meat stewed in tin cans not only nutritious, but mighty good slurping.

Despite his early peccadilloes, or possibly as a result of them, Mr. Kaercher grew up to become a successful businessman, a member of the state House of Representatives, and presently, in collaboration with his son Jim, the editor and publisher of the Ortonville Independent. But the memory of the open road lingered on, and One Sunday afternoon some years back he visited the local hobo camp. There he found four migrant gentlemen washing vegetables in a spring fed creek and cooking a batch of something that made the very air quiver.

The aroma from the simmering kettle was nostalgic-delicious hobo soup! Mr. Kaercher needed no urging to pull up and enjoy the fare…

Apparently, he invented the canned Hobo Soup, which you can buy in various online locales (hell if I know where you can get it locally, but a t-shirt of that logo would be pretty cool, no?)

I love this sign! “For ACTION Elect LEM KAERCHER!” and then, flanked by quotation marks, “He Gets Things Done.” And we see him strolling leisurely on his way to getting things done. Love the many fonts used in this sign–eight by my count.

You can go and fight with the crowds on Black Friday, stroll the many malls or meander through websites and curse at your laptop when it crashes, but if you want to find the truly unique gifts for the holidays, look no farther than the classified ads, and your local estate sale. You’ll get an adventure, and your friend or relative will get something they’ll remember for a damn long time.

Happy holidays, everyone, and a peaceful new year. 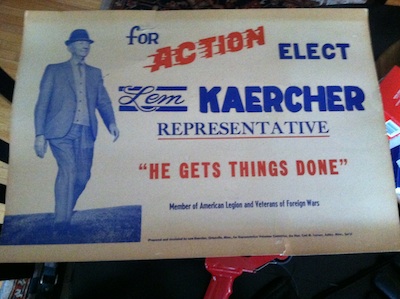 by Peter Schilling Jr. Posted on December 17, 2012
This entry was posted in Estate Sale Confidential. Bookmark the permalink.