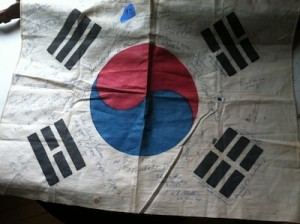 If I haven’t made myself perfectly clear over the last year of writing this column, probably the best thing about estates sales is that they’re so damned fun. Last Friday, ESC visiting dignitary Mayor Mike Haeg and I hit four different sales, which, in their own right, were nothing but a blast–weird collections, some cool stuff to buy, and in one case, a neighborhood we never really even knew existed. On our trip, which spread from Lakeville to Minneapolis to St. Paul, we encountered sea captains, illustrated 45s, weird tools, obscure records, fascinating 70s movies, memorabilia from the Korean war, Howard Hughes’ Spruce Goose, outdated technologies and wooden plaques with an eyeball on it. To name but a few of the weird trinkets we found.

What could be more fun?

We began by heading east from Mt. Holly to the distant ‘burb of Lakeville, where a “Tool Sale” was advertised. This was way out of our way–Lakeville’s about a half hour east, and we were interested in going north, toward the cities–but “Tool Sales” often have interesting stuff, not the least of which is old tools. Sometimes, you have old dudes collecting tools, which may reflect some odd hobby or such.

Mike and I got a bit lost, spending our time discussing our mutual admiration for 70s films (and especially those with Walter Matthau), and when we finally stumbled on the place it turned out to be a townhome in a retirement community, or at least a community geared toward the retired. This was your usual one-level, two-bedroom, with a big, finished basement, nothing special. Upstairs we found a room full of slide projectors and carousels, just in case you decided to go back to film, and then processing said film in slide form. There were also a couple of organs, playing awful country music.

Apropos of our conversation in the car, I did find a couple of DVDs of relatively obscure, though critically acclaimed movies, neither of which is available on Netflix streaming–Bite the Bullet, a 1975 Western with Gene Hackman; and Hard Times, a Depression-era boxing picture from the same year. Exciting stuff.

But the basement! Well, you wouldn’t think we find anything of interest, as it seemed as if this stuff were merely castaways (I couldn’t find an obit, and this did have the look of a moving sale.) First, we passed by the individual’s collection of framed Spruce Goose photos–you know, that massive wooden airplane that Howard Hughes threw together and never flew higher than a few feet (and is still the largest airplane ever made, if memory serves.) Then there was the framed painting of the grizzled sea captain–there were, again, two of these, one of which was a dramatic painting of a three mast ship fighting a turbulent sea, with the ghostly image of the captain in the sky, smoking his pipe. Maybe he made the clouds?

On a table, we found a pile of 45s, only they weren’t your usual 45s. A bunch of neat illustrated singles of children’s songs, that Mike originally thought to turn into clock faces (you can get the mechanisms at Michaels, sez the Mayor, who declined since he had a ton of other projects on his plate.) Cooler still were the many records with home recordings on them, like this one, for the “Saleck Family Screwball”, whatever that is, or was. These Philco Safety Records could be used, with a special recorder, just like cassette tapes–set one up, say during your family’s ‘screwball’, and you’ll laugh along for years.

Even though these were neat, we passed on the records. Mike found himself this weird Spanish device called an Episcopio, which projects images of stuff on a wall, like a leaf or a bug or a drawing. We also passed on the pile of wooden plaques with a single eyeball on them. I also passed on this neat metal bank, a promotion of the Northwestern Bank company. A long time ago, the Northwestern Bank Building had this tower that predicted the weather–if the lit ball was red, it was going to get warmer, green meant no change, white meant colder, and if it blinked you could expect precipitation. I know this because the code was written on the side. There wasn’t any key, and the bank was nothing I really wanted, so there it remained for the next guy.

What was also intriguing about the sale was this: there were hardly any tools at this “tool sale”, and it was pretty clear that we hadn’t missed them. The guy had a normal collection of tools. Hell, I have more tools at home, and I can barely use them.

From there, Mike and I hit the only mediocre sale on our jaunt, this time in Bloomington. A beat-up split level, with a bunch of Christmas junk that depressed me. For the longest time, I wanted to write an appropriate ESC column about holiday collections, but this home made me realize that if a person had legitimately beautiful stuff, it was probably homemade or kept by the family (or both.) I have never, in all my years of hitting the estate sale circuit, found a good Christmas collection that wasn’t just “collectible” junk meant to be valuable but now worth nothing but landfill space.

However, I did find the exact same Northwestern Bank bank–only this time made of plastic!

From there it was off to Minneapolis (actually Richfield), and a small little bungalow that reaped some great rewards for Mr. Haeg. Here was a home of a man who liked to tinker with electronics–Mike scored a bunch of 1970s Popular Mechanics (which included articles like “This Sub for Hire! Bob Gannon’s Adventures Aboard the Aluminaut!”) and an Overseer Electronic Visual Aid Machine, which looked like a small TV with a camera attached to one side–you point the camera at something, and it appears on the TV (I think it’s to make tiny print loom large on the set.)

Mike pointed me to a green plastic box containing notecards of the various Ham radio contacts our man had collected over the years. Mike came away with the magazines, a weird window alarm, and this weird little tool called “the Yankee”, which is like a sideways screwdriver that allows you to handle screws in tight places.

It’s not often we hit St. Paul, and this was it for the day’s sales, so off we went. This time to the “west side”, actually that southern bump across the Mississippi River that you access using the Smith Avenue High Bridge. We both remarked on how this area is probably eternally covered by a dismal blanket of clouds, but it was nonetheless fascinating. None of the homes looked the same–old Victorians, some newer apartment buildings in disrepair, old storefronts that Mike complained had been destroyed by removing the big, beautiful windows (they did look awful), and then our home, on Hall Avenue.

What a weird place! Clearly, it was in the throes of being restored. But it seemed like that Winchester House of lore–forever being added on to in an attempt to appease ghosts. There was this giant brick Victorian, with what looked like a big, rectangular box slapped on the front, the length of the house. Some time ago–probably the 70s–when the place got split up for apartments, someone got it into their head to ruin the look with this clapboard porch. The brick exterior was painted and ugly.

Inside, there were weak yellow lights illuminating mostly junk in a freezing room without heat–tables filled with old dishes, Christmas ornaments (once “collectible”) and a variety of old, worthless stuff, like the “Airport” game, not modeled after that fun movie (seriously) but more a “Monopoly”-style game where you run an airport’s business. Walk through a hallway, past a staircase that was taped off, and not only did you suddenly have heat (that smelled like damp asbestos), but it was restored–polished wood floors, painted, lit, a kitchen with new appliances, fancy tile work, cabinets. Go out the back door (to where the few yard items were), and you see the one exterior brick wall beautifully stripped of paint, the wood shining, beautiful. Go through the kitchen to the basement and… yikes! There’s your Silence of the Lambs basement, replete with Clarice Starling’s hat (left.)

There was an attic, and Mike found himself a really great album by a group called Delaney & Bonnie. It made me wish I still had a record player–Mike had all their albums except one, and what do you know, he found that one. In great shape, too. Later, back in Mt. Holly, he played the thing, a Stax-style soul record that was just fantastic (he played a few of their records.) And this other gent held his sweet copy of Surrealistic Pillow close to his chest, so it was a good day for the record collectors.

On the way out, I stumbled on this Korean flag, obviously a souvenir of the owner’s time serving in the Korean War. Sometimes this stuff just kills me–it was signed by members of his unit, affectionate little notes from pals, and unless the owner’s dead and has no relatives (or none that liked him), why sell the thing? How do you not keep this in the family. Late in the day, it was still for sale at $40, so I wonder if others felt the same way.

Odder still was this: every sale–and I mean every sale–had a larger collection of tools than the one that advertised tools. There’s no explaining this business sometimes.

Afterwards, in the cold and snow, we went for a trip to Cecil’s Deli, where we devoured roast beef and pastrami sandwiches and pie. It was a great afternoon–weird locations, weird stuff, good conversation and company and the promise of snowy weather. And I love seeing Mike emerge with good music and tools he can use to entertain the many visitors at Mt. Holly–I fully expect to see leaves projected on his white wall and some Delaney & Bonnie crooning in the background. Sometimes, a great afternoon is all you want from estate sales. 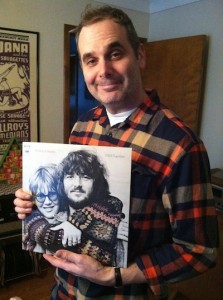 by Peter Schilling Jr. Posted on December 11, 2012
This entry was posted in Estate Sale Confidential. Bookmark the permalink.