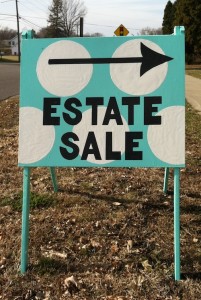 One thing that I’ve always noticed about estate sales is that you typically do not get to see every level of society. There is simply no Jacob Riis-style examination of how the other half lives. Estate sales, as their name implies, are a disposal of someone’s estate, the items that they have accumulated in their lifetimes. The poor, as we should know, have no estates.

We avoided most estate sales over the Black Friday weekend (and its small business counterpart, sponsored, uh, by one of the largest corporations on earth), but had a blast visiting the mansions and split-levels of the Twin Cities the weekend before with ESC visiting dignitary Mayor Mike Haeg. We saw thousand-dollar books, greenhouses, Christmas collections no one would want, and, for the first time perhaps, a flop. That is, a run down apartment where a poor man with filthy carpeting and maybe a dead body in a bathtub tried to sell his junk.

We began our sojourn in the suburbs. There were three Minneapolis sales that weekend, two in mansions, but that usually means long lines at 9:00, and weren’t interested in standing in line just to gape at expensive swag we couldn’t afford.

Our first visit was to a strange little antique sale that was billed as an estate sale. This was in downtown Wayzata, in what looked like a bank from the 70s that was trying to look like it was from the 30s, and was now out of business. One of the bay windows had what appeared to be thousands of dead box elder beetles scattered about. Reluctantly, we went inside.

It was a room with stuff. Decent stuff, not a lot of stuff, but a treasure for Mike for a future Christmas present that I’m just now realizing that I shouldn’t reveal here. But there was also a box of Betamax tapes. You see Betamax tapes sometimes, but this one also had a Betamax machine, which is a real rarity. There were some decent movies in the box, though nothing you couldn’t get in any other format. I almost thought of making a bid for the thing so I could play the Betamax tape I have at home, but I passed (pay close attention to eBay sales when bidding on videotape, that’s all I’m saying.)

From there it was north, to a warren of sad little ticky-tacky townhomes built on flat clump of farmland and facing nothing but other townhomes. This place was the home of an antique dealer, not an estate but a thinning out of all the accumulated junk he’d stored away over the years. Like most townhomes, this one was boring, a living room, sunroom, two bedrooms, kitchen, garage. But it was filled to the textured ceiling with Christmas crap, nothing you couldn’t find at any Target or Michael’s or, heck, a garage sale for a quarter a box.

I found a copy of the same hardcover Little Orphan Annie book that I had bought at a weird sale a few weeks back. This was great, because I had to get rid of the other one, as the mildew smell made me feel like I was lounging in a New Orleans grave as I was reading. In the garage, I also found what I’d call the “Mink Centipede”, three poor creatures connected face-to-butt, like that awful horror flick (left.) Shudder.

We were also fairly shocked by the rotund man at the sales desk, whose shirt was only buttoned in one spot, and whose gut spilled out like candle wax over his lap. Also, did I mention that everyone in the house was devouring these homemade subs, and I swear they were eating like it was their only meal in days. We couldn’t get out of there fast enough. Mike did come away with a little plastic frog with rosewater breath that spoke to him repeatedly on his journey. It was that kind of sale. 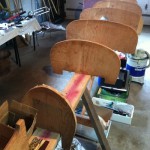 From there it was south, to a remote home on a narrow street in Bloomington. This was your usual split-level, from a house with a guy who made his own canoes. I know because you could buy his canoe frame (left) for $150.

At the next sale, another Bloomington split-level, Mike was happy to find this weird metal IBM gauge card (right), which we assumed was a template for those old punch cards that were the basis of computer technology (and maybe helped Hitler organize the Holocaust.) There was a lot of overpriced junk at this one, but the woman who ran the sale was eminently pleased at our praise about her homemade polka-dot “Estate Sale” sign (top.) “Of course I made it myself!” she shouted.

By now it was around noon, so we hit some lunch at Quang and then went to check out the mansions. The first still had a line of about twenty people, even though it was after 1:00, so we hightailed it to the next manion, only to remember a smaller sale on Harriet Avenue  in Uptown. There wasn’t any signs (we were going by the newspaper ad) until we pulled up in front of one of those many box apartments that unfortunately dot the Uptown area.

Who the hell approved these things back in the day? Beautiful real estate in these neighborhoods are ruined having to face these bleak stucco and brick eyesores with their cheap windows and flaking paint. Outside this dismal rectangle was a scrawled “Estate Sale” sign. Once inside, where the smell was something akin to rotten milk and old sweat socks, there was this little notecard that read “Go To Third Floor”. Up the stairs we went, where at the top was a scene like something from a poor man’s David Lynch film. An impossibly fat man sat on a wobbly kitchen chair and glared at us as we walked to the end of the hallway. There were two doors to apartments, no signs, and then another larger white door. Where to go? “307!” the man screamed, a high pitched wail that seemed to travel through his throat over pockets of accumulated phlegm.

So we headed through the white door, down a hallway where the odors were even more concentrated, and into a thoroughly depressing apartment. “Oh, I didn’t see you,” said the man, an elderly soul in a stained dress shirt and slacks. The carpet was ancient, originally tan but with stains and burn marks, so poorly laid that it would fold up in places around the room. “Are you looking for anything?” he asked, and I almost didn’t know what to say. There was old glass and broken frames, an old dining room table that looked like nothing more than landfill fodder. He held up an electric clock that looked as though it had been hurled at a bedroom door repeatedly. “Found this in my storage locker. Only eight bucks!”

When he told me there were books in the bedroom, I wandered in that direction, not believing for a second I’d find anything of worth. The other bedroom and bathroom doors were shut, with a scrawled “Don’t Go In Here!!!” sign on each. The bedroom actually had zero books, but an old couch that someone had surely died upon, and a desk with a split down the middle.

Needless to say, we didn’t stay long, and outside we all gulped fresh air. Janice said that our man asked if she knew anyone who was getting married soon, because the glasses, all of which were streaked with white gunk, would be perfect for a bride’s trousseau.

It’s barely a hop, skip, and a jump to the mansion on Colfax Avenue, in Minneapolis’ Lowry Hill district, though it wasn’t immune from watching its neighbors’ homes get devoured by an ugly apartment complex much like the one from which we’d just escaped.  This was the home of a truly rich human being, living in a palace with a grand piano and a greenhouse that probably has more square footage than Mike’s house and ours combined. I don’t think the person died, as there wasn’t a lot of clutter, or old clothes, etc. But there were books. Weird books, stupid books (left.)

These were some of the most ridiculous books I’d ever seen, and I honestly don’t have a clue why anyone would find any value in them. For instance, there was a giant hardbound copy of The Old Man and the Sea, from 1990, published by some strange entity called “The Limited Editions Club”. No illustrations, just a tremendous, probably 12″ x 24″ tome printed on thick stock. Price: $1,200 at this sale.

Why? Because someone chose to limit the printing? It’s not like there was a pile of beautiful illustrations to accompany the work (like in this $500 edition of my favorite baseball book), or it was signed by Hemingway. And there were dozens of these things around, most of them newer, barely twenty years old, valuable only because the published deemed them so.

I found some cool playing cards from TWA and Pan Am (including a weird set of Robocop playing cards that I gave to my friend Barry) and marveled at the expensive shit they had laying around, like this LeCoultre Atomic Perpetual Motion Clock. Apparently, you are supposed to get this clock going and then *NEVER MOVE OR TOUCH THIS CLOCK… or so said the sign on top (right.) How someone would get it home remains a mystery. There was a note next to it that stated that to get the thing running again you’d have to pay a St. Paul jeweler roughly $400 to come out and tune it up. 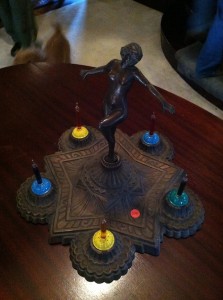 We finally hit the Pillsbury Avenue mansion, and still had to wait about ten minutes, only to find nothing of real interest other than the madness of wandering through these giant homes that seemed so damned cold and impersonal. There was this bizarre… hell, I don’t know what you’d call this weird bubble light and nymph display, just the thing for the holidays (left.) That’s Santa’s mistress, maybe.

We all had a good laugh about the weird sale on Harriet Avenue, and of course it wasn’t a real estate sale, even though they did advertise in the Star-Tribune. Then again, most of the sales this weekend weren’t genuine estate sales, but merely people trying to rid themselves of stuff, all the shit they’ve accumulated in their lifetimes.

In the end, I felt a bit bad for the gents on Harriet Avenue. They’re probably living on the periphery, barely scraping by, and trying to sell of the garbage they think is valuable, that they might have actually spent money on at one point, money they need now. Is their crappy table any less weird than the dude’s $2,000 books? No–actually the table’s a lot more functional, and had more meaning, probably, in its owners’ life. The poor home seemed squalorous, its inhabitants only a shade different than Peter and Raymond, crammed into that small apartment, while the mansion, both mansions, didn’t even seem like homes, but museums, empty rooms and the most expensive of everything, the kind of place for a Charles Foster Kane and his wife. Honestly, I don’t know what’s worse. Do you?

by Peter Schilling Jr. Posted on November 26, 2012
This entry was posted in Estate Sale Confidential. Bookmark the permalink.