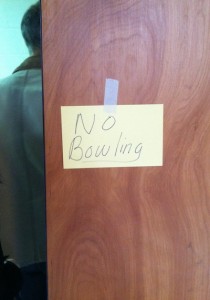 Over the years that I’ve been hitting sale circuit, one thing that’s always intrigued me are finished basements. We have finished basements today, it’s true, but back then it seemed as if people were keen on replicating their favorite hangouts, and of course, their favorite hangouts tended to be bars. I don’t believe that too many folks build bars in their basements–today, you have weight rooms and home theaters and video centers. You see fewer pool tables and bars and bowling alleys.

Wait–bowling alleys? Yes, friends, this weekend’s sales, which were weak, to say the least (that went for the weekend before as well), did offer the home of a man who had a regulation-sized Brunswick bowling alley. Among other treasures.

Even more peculiar, a quick look at the Hennepin County Property records indicates that this gentlemen wasn’t even known as a bowler. He was known–I think–as one of the most daring, most dangerous, most hated and most loved Stock Car racers in the state’s history.

I say “I think” because even though the property records indicate as much, there wasn’t a whole lot in the house that made one think of a racer. Property records say “William Sr.”, and when you type that in with the last name, you get scores of obituaries about this “Wild Bill” who ran the midget circuit and who once demanded police protection after “a jalopy championship at the former Twin City Speedway in New Brighton” in which he was beaten by four men who thought he’d souped up his vehicle. (This from the International Motor Contest Association’s “Old Timers” page.)

So what’s the confusion? Well, in the basement was a nice little bar, wood with these crazy leather inlays, a sort of cowboy bas-relief. On one we see a saddle and the words “Art’s Bar”. So who the hell is art?!?

After beating around the Twin Cities at a variety of clean, nearly worthless sales, we ended up in Minneapolis’ Fulton neighborhood, just a few blocks from the hyper-congested 50th and France corner, which could be my least favorite place to drive in all of the Cities.

This was a long rambler, a brick affair that looked like it would fit in so near Edina–most of the homes in that area seem newer, the 50s variety, maybe a bit older. Upstairs it was the usual assortment of junk–books, records, a ton of household items (so many, in fact, that they were featured in the classified ad.) Head down to the basement, and there’s your pool table, Christmas stuff, the bar, a bunch more worthless records, an arcade-quality poker video game from the early 90s… intriguing, but not spectacular.

And then that crazy bowling alley! Off to the side, past a handwritten yellow sign that read “No Bowling!” (above) you come into a brightly lit room with a regulation Brunswick bowling alley. Automatic pin machine at one end, Brunswick ball return at the other (below, right), a shelf with bowling shoes, a chalkboard scoreboard, scorecards, the works.

Now I’m intrigued. There must’ve been balls there during the sale, since they had the sign demanding you keep from playing, and there used to be pins for sale in one corner, as a sign reading “Pins-$3.00″ hovered over nothing. The proprietors of the sale had taped off the end of the alley, but I snuck by to look. It was professional set-up, all right. This was one serious bowler.

But I think you could say this was a man serious about his leisure time. If it was indeed the “Wild Bill” from the tax man’s records, then what we have is a guy who worked his tail off in the trucking industry (according to his obit), and who raced cars, bowled with an eye toward practicing at home, playing pool at home, drinking with his pals at home at his beautiful bar.

According to the many obits (there were two in the Star-Tribune alone, but the best one, at the IMCA site, is here), “Wild Bill” was also known, pre-Earnhardt, as “The Intimidator”, and was loved and hated by racing fans. He had a signature inside passing move that freaked out his opponents, who, as I mentioned before, once tried to beat the tar out of him.

But it’s this, coupled with his truck driving work, that intrigues me. At first blush, it is easy to assume that whomever owned this home was a professional bowler. That he was so committed to bowling that he had a regulation lane installed in his home. In fact, there was a jacket in his closet that read “Lyn-Lake Lanes”, thus suggesting he was in a league.

If this is indeed “Wild Bill” (and you’ll see that the obit also states that kids used to run to the home whenever he revved up his racer in the driveway of his “South Minneapolis home”), and Mr. Intimidator was out driving truck and out racing and out bowling, I’m guessing that he didn’t just have an affinity for being the best at his chosen sport (though I’m guessing there’s some of that), well, there’s probably also a family, in his case, three kids and a wife. A guy who’s been hauling a rig across the country for a few weeks probably wants to bowl, and probably wants to just hang out in his own home.

Whether it’s “Wild Bill” or this guy Art (and the only evidence of Art was that leather patch on the bar–so maybe Wild Bill bought the home from Art? Art built the bar?) this was a place for a guy to relax. Dig the pool table. Dig the video game. Dig the many, many record players, including this awesome suitcase-style turntable with built-in speaker. Dig the fireplace and the well-used little pizza over and stove.

They say that Wild Bill dropped out of high school and joined the Navy, lying about his age. It’s written that he started racing midget cars in Southern California while in the service, got hooked, came home and began to race, to drive truck, to make his money and spend on his family and his friends and himself, in a way that he could share his bounty. There’s joy (races, family, Hall of Fame inductions), some sadness (he was preceded in death by his wife and not one, but three, grandchildren), and some good deeds (he was an active volunteer in his retirement.)

My favorite part of the obituary is this one: [Wild Bill] was brash and colorful. His fans loved him for climbing the fence to give kids tiny checkered flags after wins. Then there were the fights, rollovers and crashes — lots of them.

We didn’t come away with much on this jaunt–a weird wine cookbook for Janice, some clothes, pencils for school–but this is one of those great moments where I got the best find for my time–a great story. You can read these obits–and I do, I do–but wandering through the home of these good people is getting a strange glimpse into their lives. I wish I could’ve seen Wild Bill race his cars, put some English on his break at the pool table, or listen to some Jimmy Dean on his basement record, while his kids scurry underfoot. I imagine being upstairs and hearing that not unpleasant sound of bowling balls crashing into pins, and the shouts.

This life sounded like a lot of work, and a hell of a lot of fun. Wish I’d found a checkered flag of my own… 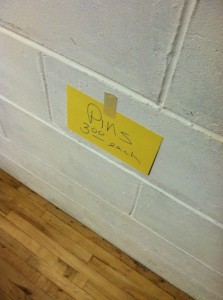 by Peter Schilling Jr. Posted on November 12, 2012
This entry was posted in Estate Sale Confidential. Bookmark the permalink.

One Response to ESTATE SALE CONFIDENTIAL: A MAN’S HOME IS HIS BOWLING ALLEY