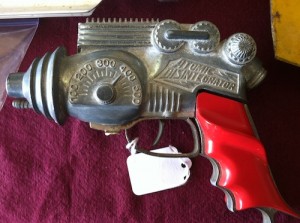 Once upon a time, there used to be two giant Superpowers in the world. One was called The United States of America and the other was called the Union of Soviet Socialist Republics. These two countries hated each other, and built giant weapons, A-bombs and H-bombs, that, when dropped on cities, would destroy everything–from the tops of the tallest buildings to the bottom of Gimbels’ basement. They fought surreptitiously through smaller countries, like Vietnam and Korea, in a great conflict that was once called “The Cold War.”

Naturally, people were terrified, as they should be. Everyone had witnessed two of these bombs going off in Japan, and saw the destruction. They lived in a state of fear, and told stories to help make them feel secure, to feel that they had a semblance of control.

The last couple of weeks had been fairly dead as far as sales go–lots and lots of dumpy household crap, a sale with tons of art (if that’s your bag), and the usual Life magazines, which are damned fun for me. Janice and I wandered the circuit with ESC Special Guest Star and Mother-in-Law Jean Rideout, and it was at a sale in Hopkins that I found a magical Life, a special issue dedicated to the fantasy of fallout shelters, replete with detailed blueprints, photos of families crammed into their cruel walls, and even a letter from president John F. Kennedy.

That would’ve been it were it not for a wonderful sale at the Muirfield warehouse this last weekend (and still going on as of Monday), full of old-fashioned toys–tops and puzzles and metal race tracks with deadly sharp edges, and guns: ray guns and shot guns and metal squirt guns (you read that right) and potato guns. All in excellent condition.

Life’s special “How You Can Survive Fallout” issue, from September 15, 1961 is one hell of a fun read. Look at that cover! A man, lit in red (presumably the glow from the burning cities), is reaching out… to offer a helping hand? To direct you to his fallout shelter? Or, most likely if this had actually happened, to reach out for help as he gurgles “this shit isn’t working…”

Inside you’ll find a very earnest letter, “A Message to You from the President.” How exciting it must have been for the editors of Life to have landed this assignment–Cold War paranoia was at its peak, and here was the young president writing a letter just for that special issue.

And what an issue! Remember, this is an improvement over the already dated “Duck and Cover” campaign of the 1950s (Wikipedia says “through the 80s”, but no one took this thing seriously even in the 70s–we just figured we’d die.) Check out the loony short movie entreating kids to jump under their tables when the Russians dropped bombs: 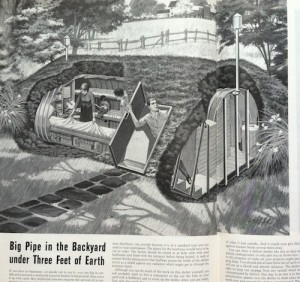 Why Bert is being threatened by a monkey with a stick of dynamite is beyond me, but there you go. I remember the fallout shelter signs in my classrooms, pointing to the basement, but as I said, we were pretty jaded by the 70s, and I think if there were bombs on their way, most of us would race home to spend our last hours with our loved ones.

Ah, you silly fools, you don’t have to die in the basement of a school, no, you can rush home and climb into the fallout shelter that you and your dad built, together, with your own two hands, feeding off the lovely canned supplies that mom and little sister organized. Or, in the case to the right, little Billy is an only child, thank God, because he’s crammed into a pipe with his mom and dad, who is busy checking to see if he can see the bombs actually landing.

Life is full of great suggestions, ideas that I’m frankly shocked no one thought to question even then. “As in any outdoor shelter, you must be more self-sufficient than you would be in a basement. You must provide your own fresh air and take pains to see that it is not contaminated. The best way is to install an air intake pipe at one end of the shelter and an exhaust pipe at the other.” It continues to suggest using a fan and then, “Vents on top of both pipes should be topped by screens to filter fallout. Both pipes should have at least one elbow bend in them to keep out radiation.”

Bends in the fucking pipe? 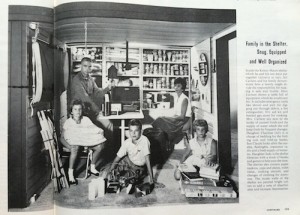 Holy Christ, here is your family trapped in the fallout shelter. “Daughter Judy is the shelter librarian with a stock of books and games to help pass the time.” This dismal little girl looks as though she’s probably thinking to herself that she has either got to get away or murder her own clan and then herself. “The inside walls of the shelter are painted bright colors to add a note of cheerfulness and increase illumination.” There’s not a whole lot I can add to that.

The rest of the piece shows a few different models and blueprints, and then a spread on people merrily loafing around their fallout shelters–a girl with a coke on her knee, laying on a bench and yakking with her girlfriend on the telephone, a guy relaxing in the sun after a hard day’s work building his shelter, a prefab shelter being sold in a Texas parking lot before curious onlookers.

What I want to know is: where the hell are these things? No one in my family built one, and I’m sure not everyone, or even close to everyone built a backyard shelter, but those who did–can you still find them? Are there split-levels in Bloomington with a mildewy bomb shelter hull half buried in the backyard? I would love to just see one, step into one, imagine, for just a moment, the end of the world, trapped in that shelter with my books and canned peas like something from an episode of The Twilight Zone.

What’s intriguing, too, are the lack of toys in any of the photos. Yeah, board games, but sometimes a kid’s going to want to play by themselves and not with their damn sibling. Where are the toys?

Where I can’t find bomb shelters I can often find vintage toys. Muirfield had a choice sale at their warehouse in Hopkins, full of gorgeous toys like the Atomic Disintegrator (top), or the Buck Rogers ray gun (left.) Beautiful old steel toys, toys built to last, and toys that speak to the atomic age sci-fi craze.

One of the thing you always hear old people (like myself) yammering about are how kids today are too coddled, that toys were toys in their day were deadly. Well, that’s true, and it’s also true that we save money not having to haul our children to the emergency room to repair gashes in their foreheads after getting whacked by one of these steel guns. Or, for that matter, grieving over our kids when they’re gunned down by a cop mistaking a toy gun for the real thing, like the Newell Sub-Machine gun (right.)

This was the sale of a dedicated collector, and probably most of it was sold to dedicated collectors (in fact, when I went back the Atomic Disintegrator was gone, and it had a hefty price tag.) There were beautiful metal tops, old Mickey Mouse ephemera (back when Mickey was a weird looking dude who did cruel things in his cartoons), framed pamplets from radio shows like Little Orphan Annie and Jack Armstrong, reading material about how to learn Armstrong’s secret whistle code (“Two Whistles…(Short): Be on guard for trouble!”) Even a red space vehicle called the “Red Streak” that looks very similar to the Landspeeder Luke’s riding on in the first Star Wars.

This may be the time for me to rant and rave about how simple and beautiful old toys were compared to today, and far be it from me to disappoint: these toys are gorgeous, old deco designs that trigger the imagination more than any X-box. Ray guns invite creativity. The Atomic Disintegrator wasn’t attached to some serial, like the Buck Rogers toy, but even then, kids had to chase each other around, usually outside, blasting away in a universe of conflicting personalities that was the product of their own imagination. Maybe they played a game where their backyard and railroad tracks became the jungle, and communicated with Jack Armstrong’s secret whistle.

Maybe they held those guns tight to their chests late at night as they looked out the window at the soft glow coming in from the fallout shelter, where mom was busy stocking the larder with awful beets. And you hoped against hope that this silly weapon of yours would make everything work out just right…

Times have changed, the threats still exist and are perhaps more acute, and more slippery, as enemies come and go and our own motivations become less clear. I suppose it’s no wonder, then, that the toy collector surrounded themselves with the heavy steel toys of a simpler time. After all, no one builds bomb shelters anymore.

by Peter Schilling Jr. Posted on October 29, 2012
This entry was posted in Estate Sale Confidential. Bookmark the permalink.