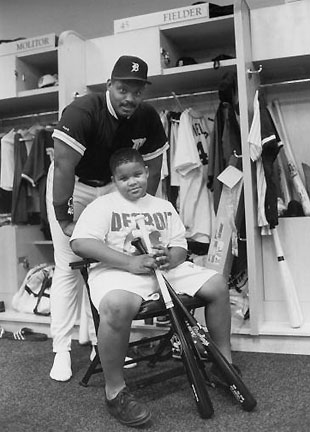 By now everyone who reads my baseball stuff knows that the Detroit Tigers, my Detroit Fucking Tigers, went crazy and signed the affable and corpulent Prince Fielder. As a Tiger fan, I have seen a couple weeks of emotional roller-coaster riding: a few weeks ago, catcher/DH (really DH) Victor Martinez wrecks his knee and is out for the season, so that means, naturally, that the season is over in January (this is how the neuroses work.) Then, suddenly, Detroit grabs Prince Fielder from Milwaukee to the tune of 214 million dollars for nine long years. Immediately, it appears that the Tigers have the World Series locked up. Congrats to us, we are the champions.

Of course, now that the dust has settled and we’ve all calmed down a bit, maybe we can take a look at this situation for what it really is, and maybe get a bit excited, but not too excited. After all, Prince is just one player.

For starters, I think this was a good move because a big part of fielding a major league club is its entertainment value. And Prince Fielder is entertaining. The dude grows awesome facial hair, and God damn if he doesn’t run faster than anyone of that shape and size. There used to be a running joke about how his pop, Cecil, himself a rotund man, had the longest streak of games without a stolen base. Well, I watched that game where big Cece finally took off, and it looked akin to those nature programs where helicopters spook hippos into fleeing the mud.

Prince is a bit more graceful than that, but my bringing up Cecil adds to the entertainment drama we’re going to experience in 2012. Unfortunately for Prince, he loathes his father, who I have come to understand is a bit of an ass, and someone who has actually taken some of his son’s money in ways that, at the very least, bothered that son quite a bit. Every season, some wag in the press gets it into his head to interview Cecil, who plays victim for all it’s worth, and then the “journalist” follows up with asking Prince when he’ll start talking to his poor dad again, which naturally makes Prince suggest that the gent mind his own business, please.

With Prince now playing for Detroit, you can imagine the attempts at trying to get these two together from some on-field love-fest. After all, in the early 90s, Prince cut quite a figure in Detroit when his Dad was blasting home runs out of Tiger Stadium–in fact, at age 12, the boy actually smacked a batting practice home run himself, the stuff of legend.

And every Tigers fan remembers these silly McDonald’s ads. Cecil does have a great smile, but I remember thinking “oh, my, that’s kid’s going to be huge…”

Jeez, it really looks as if Cecil’s gettin pissed that Prince hasn’t yet thrown the pitch. Maybe he’s just hungry.

And apropos of McDonald’s, let’s not forget that Prince is a vegetarian…

I’ve been following Prince’s career since he was featured in Moneyball, in a fairly cruel scene in which it was noted that he was “too fat even for the Oakland A’s.” But his signing by the Brewers meant that the A’s got Nick Swisher, which of course resulted in their six straight World Championship titles. I am happy to report that in reality, Fielder has been much better than Swisher in almost every statistic, including the hallowed OBP.

Most wags believe, as I do, that this contract is borne partially out of desperation by owner Mike Ilitch, who is getting old and desperate to have the Tigers win on his watch, a sentiment that will, no doubt, be milked for all it’s worth by lazy Michigan sportswriters. Most wags believe, as I do, that Prince does provide the Tigers with some necessary punch in the middle of their lineup, and protects Miguel Cabrera (and maybe helps Delmon Young, too.) His numbers are actually better than the injured Victor Martinez, (.981 OPS to Martinez’s .850, and even his OPS with runners in scoring position is better, albeit slightly–.993 to .990.) But his signing does something else, which is to generate, at least for one year, a tremendous amount of excitement and possibility, something I would argue that the Twins, my local team, know little about.

The Twins are “small market”, despite having a gorgeous, publicly funded new stadium and the wealthiest owners in baseball. They will always be small market because we should all admit that that is part of their brand, an incessant reminding of how they are eternal underdogs who cannot afford any free agent except local talent like Mauer and Morneau.

The Tigers, fortunately, are not this type of club. Now, I am painfully aware that signing Prince Fielder does not guarantee anything, not even the Central crown, and maybe not even a guarantee that they will not collapse and land in last place (remember 2008.) But the reality of the situation is that Fielder is an extremely good player now, a great hitter, better even than his father, and should do very well for the Tigers, who are strong top-to-bottom, this season.

I like that. I am profoundly aware that this nine-year contract (ouch) will probably suck, not in seven years, not in six, but perhaps in as soon as two or three years. I also don’t care. Because, unlike the Twins, it seems that the Tigers try and cash in some of their future in an attempt to win now.

If I had to choose between the Tigers going to the World Series in 2012 and then being in last place from 2013 to the end of Fielder’s contract, or winning six division titles but losing in the first round each season over that same time period, without question I would choose the former (and I am aware that’s a big “if”, but we are, after all, playing the speculation game.) Fielder can only help that–he has decent post-season numbers, and he looks to have another monstrous year with the Tigers.

There’s a ton of speculation going around: namely, that he’ll stink in new Tiger Stadium, which is no Milwaukee Park. But Harwell Park and Selig Field aren’t so far off: Crunching numbers isn’t my forte, but I’ll refer to fellow baseball maniac Darren Viola, who wrote on a Facebook “Park Factors don’t look that far off. Miller Park: Multi-year Batting – 103 One-year: Batting – 105 ~ Comerica Park: Multi-year – 101 One-year: Batting – 103.” Many have tossed out that no one his size has ever done well, and that he’s 27 now, which means his best years are behind him since 27 is the average age when ballplayers have their best seasons. I’ve heard many naysayers complain that moving Cabrera to third is going to result in some awful defense, which is probably true–though the Brewers rode that same situation nearly to the World Series last season. Folks have made mention that ground-ball pitcher Doug Fister’s going to have a hell of a time, though I wouldn’t be surprised if, on those days, Leyland sits Cabrera or makes him a DH. (And Cabrera’s totally on board with the move, by the way.)

And who knows what’s going to happen? Lots of players have awesome seasons after age 27. This could be the single instance a nine-year contract is worth its weight in Prince Fielder. It could be that the Detroit Tigers have wisely bought this contract because they sensed that in 2013, when Mark Teixeira blows out his knee or becomes God-awful, the Yanks will eagerly devour the remaining years of Fielder’s contract, and the young man will, with equal relish, hop to Gotham.

Who knows? For now, on this day in January, 2012, the arrival of Prince Fielder seems, to me, to be a welcome diversion, a promise of hope, a strange beckoning to the past, and yet another grotesque example of how we overpay ballplayers (though that is certainly something we have to accept if we’re at all going to follow this maddening sport.) If the Tigers win, this will seem totally justified. And if they lose, and if they fail miserably, then the heartbreak and frustration will be almost operatic in its grandeur.

And that’s baseball, in my book.

by Peter Schilling Jr. Posted on January 26, 2012
This entry was posted in The Noble Sport: Baseball and tagged Detroit Tigers, Prince Fielder, The Neurotic Tiger. Bookmark the permalink.

One Response to THE NEUROTIC TIGER: HERE COMES THE PRINCE