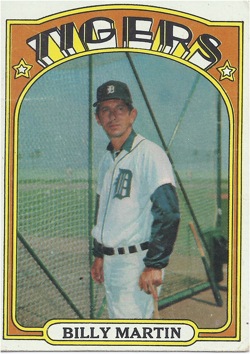 In the aftermath of the Tigers’ 10-1 drubbing at the hands of the mighty New York Yankees, I invoke the sour image of one Alfred Manuel “Billy” Martin, former manager of the Tigers, Twins, A’s, Rangers, and the God damn motherfucking Yankees. At least that’s how I’d imagine Martin speaking about his former club, had they beaten his men as soundly as the Yanks did last evening. Probably, too, Martin would have saved a few ripe invectives for his own boys, especially the biggest names on the club, you know, the guys who personally threatened him.

Here we see Martin posing with his extended middle finger on his baseball bat. Yes, he is using sign language, and that profound, distant look, not only to communicate “fuck you”, but to ask God himself if there is anything he, Billy Martin, can do to convince that selfsame God to fuck over anyone and everyone in Billy Martin’s narrow path through life. Including the poor sap taking this baseball card photo.

It is probably unwise on my part to invoke the name of Billy Martin, since he is a World Series champ and, by extension, pennant winner with the New York Yankees, but actually failed, in five games, to advance an aging Detroit Tigers past the playoffs in 1972. But his nasty-assed attitude and desire for blood (figuratively and probably literally) seems apropos this morning, the day after the Tigers lost, the day after we–me, the Tigers, Michigan, all good people–were betrayed.

Yes, betrayed. Oh, how do I count the ways? How about in chronological order:

First, TBS is the only one broadcasting this round of games. Which is total bullshit since that means that people without cable can’t watch this round, except on Postseason.TV, which, as I have stated before, is God-awful. Though I did get to listen to the games on the radio, twice now, both times resulting in a victory for my team. Problem is, I do have cable–the very basic, cheap cable you can get, ten bucks a month, only the channels that fly through the air free for the general public, the package that Comcast literally pretends does not exist (it took me three different operators and two phone calls to get it set up.) Fox, NBC, CBS, ABC, WB, PBS, and a couple other crappy channels not worth watching.

You know, like TBS. Yesterday, my wife came home from work, turned on the TV, and there was the Rangers/Rays game. What? And then the Cardinals/Phils. Then the Tigers v. Yankees, and after that, I imagine, the Diamondbacks fighting the Brewers.

Betrayed! Yes, betrayed, like Dr. Jekyll, by his own Mr. Hyde, except that my Mr. Hyde was simply a dope who couldn’t be bothered to turn on his TV set and see what channels he’s had for a good year now.

Oh, but this sordid list continues: betrayed by expectations. This is a point in which I rudely, and with a touch of sadness, say that I told you so. Up to yesterday’s game, virtually every wag making a living as a sportswriter had the Yankees written off because A. J. Burnett was on the mound. And he’s sucked, it’s true. But as I wrote yesterday, Rick Porcello, the Tigers choice of moundsman, kind of sucks more. Last night he sure did suck. Burnett, for his part, was just good enough.

Three: even when Burnett sucked, the Tigers let him get away with it! The Dude walked the bases loaded in the first, and Detroit couldn’t score a God damn run. They might have, when Don Kelly, batting eighth, came up and drilled a deep liner into centerfield, which was caught by…

Betrayer number four–Curtis Granderson. Now, Granderson’s first inning catch was a dandy, but it was a top-hatted, dull-witted dandy because he totally misjudged the ball, moving forward and then racing back, pirouetting, and then stabbing the ball out of the clear Detroit sky (there are no more factories belching smoke anymore.) But later, in the sixth, Granderson did make an incredible catch, robbing Jhonny Peralta of extra bases which would have closed the gap, at that point, to 4-2. As it was we didn’t score more than one run.

Instead, this Judas, Mr. Curtis Granderson, ex-Tiger, Gil Scott-Heron admirer, sealed our fate, en route to the Yanks exploding for six fucking runs in the eighth. Damn him straight to hell!

Those are the betrayers. We, Tigers fans, Michigan’s despondent citizenry, and people who want good to triumph o’er evil, were betrayed. Despite this, despite the fact that none of the mojo worked last night–candle lit, Fidrych card with me, scored in the same book, jersey worn, Phil Levine book at my side the whole game–it is not the end, for the end, either for the Yanks or Tigers, will be in New York tomorrow night. I honestly have more confidence about that game than I did for the one yesterday.

After all, Porcello’s not pitching. And the angry ghost of Billy Martin is now buzzing around new Yankee Stadium, ready to torment his former club.

The pain of last evening’s game was eased a bit by good company and good booze. Thanks to Andy Sturdevant, Michael Fallon, and Bill Lindeke for joining me at the circus of carnage, viewed on a small TV set at the Happy Gnome. Bill arrived with a fantastic vintage plastic mesh Detroit Tigers cap, whose mojo unfortunately failed to change the good team’s fortunes.

Our brainstorming proved fruitful for the Tampa Bay Devil Rays. The Devil Rays–that’s their name, you know–have been totally failing to get people into their ugly as shit ballpark, despite having what might be the most exciting baseball club in modern times. What I’ve always wondered is this: since they know they’re not getting a new stadium anytime soon, why don’t they embrace the ugliness of Tropicana Field and make the Devil Rays the all-ugly team of the future? 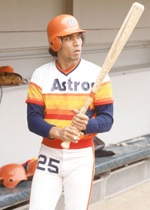 You know, I’m talking turning their uniforms into a Florida version of the Astros “tequila sunrise” pajamas of the 1970s–except maybe in shades of azure, cyan, teal, turquoise, and powder blue. Throw tons and tons of shag carpeting in every corner of the Dome, whose name should be sold to some appropriate company (“Tab Field”? “Monsanto Stadium”? “The Dalkon Dome”?) Paint those giant, mustard yellow and puke green daisies you last saw on the side of the Mystery Machine on the outfield wall.

The Devil Rays could do no worse, but certainly a lot better, if they’d only listen to three drunk guys sitting at a bar.

Mr. Sturdevant also regaled us with the “greatest baseball joke of all time”, which I have to admit was better told last evening with a Mike Royko cocktail down his throat than the version I’m reprinting here. Sturdevant’s tale weaved around a magical walk-off walk by a visiting team, and included the incredible line “We beat your team in your own damn stadium!” Or something like that. Andy’s version seemed filled with damp flannels, wet concrete, the smell of tobacco juice and in various voices, the great Mel Famey sounding like Jeff Bridges in True Grit if Jeff Bridges were played by Andy Sturdevant.

Got that? Then get this (stolen from a link that I’m not interested in sharing):

Was he the best pitcher that ever threw a baseball? Back in the 1950s, there were a lot of folks who thought so. Mel Famey of the Milwaukee Braves was a natural .. a once-in-a-lifetime phenom whose fast ball blew away the best hitters. His 90 MPH curveball would start out like it was going to hit the batter’s ear, only to break at the last instant and hit the outside corner of the plate for a strike. His changeup made the best hitters in the league cry .. they would swing, drop the bat, and stare increduously as the ball hit the catcher’s mitt. He was indeed awesome!

Why then, you might ask, is he not in the Hall of Fame? Why haven’t you ever heard of him? Alas, like many others before him, Mel’s downfall was .. alcohol. Ol’ Mel really liked to tilt the glass. His drinking became almost legendary around the country, but he never let it affect his pitching until … and now, the rest of the story (as Paul Harvey likes to say).

The Braves and the Yankees in the World Series! Excitement reigned! The series was tied at three games apiece, and the Braves were in New York for the seventh and deciding game. The night before the big event, Mel’s thirst got the better of him. He snuck out of the hotel after curfew, and bought himself two cases of beer. As you might imagine, the next morning Mel didn’t feel too good. But being the pro that he was, Mel managed to do just fine .. until the bottom of the ninth inning. With the Braves ahead by one run, two out and the bases loaded, Mel’s revelry the night before finally caught up to him. Eight straight pitches .. eight straight balls. He walked in the tieing and the winning runs, losing the game and the series.

After the game, a reporter went to the jubilant Yankee’s clubhouse and spoke to the last two players that faced Mel. “Tell me”, he asked, “to what do you attribute this victory over the best pitcher in the major leagues”?

In unison they replied, “It was the beer that made Mel Famey walk us”!

And finally, I leave you with this awesome tidbit from the Associated Press’ Bob Baum. Writing a typically bland AP wire story about the Diamondbacks victory over the Brewers last night, Mr. Baum turns his attention to Arizona’s pitcher of record, rookie Josh Collmenter. After five straightforward paragraphs describing the win for the D’s, the next graf opens as follows:

With an unorthodox overhand style he says comes from throwing tomahawks as a kid in the Michigan woods, Collmenter limited the Brewers to a run and two hits in seven innings.