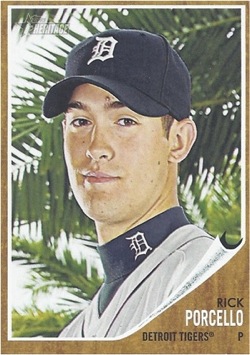 At the start of the American League Division Series, your writer was about halfway through his 43rd year. At the close of the Tigers postseason, whether the first round ends tonight or they suffer defeat in Gotham tomorrow, I figure I will be a ripe 63 years old. Unwise, but stooped, gray, grizzled, streaked with wrinkles, and with a bad ticker.

Last night’s epic contest was a rematch of the rained out duel of aces, in which the League MVP Justin Verlander (and yes, he should be MVP, you can fuck yourself if you think otherwise) took on the big man, C. C. Sabathia, who looks pinched and worried even when things are going well. The man who looks like the Man With No Name vs. the man who looks as if he needs Alka Seltzer. And probably does.

Anyway, this incredible match up reminded me of boxing. If you’ve seen the movie The Fighter, and loved it as I did, and then you went and checked YouTube to watch “Irish” Mickey Ward throw one of those awesome kidney shots, and then were stunned to see him and his opponent dancing around like a pair of drunks and then the shot comes and, well, it certainly isn’t much. Boxing, as it turns out, is pretty damn dull.

Last night’s game was far from dull, but the aces didn’t comport themselves well. There were moments–Justin Verlander’s stretch from the last out of the fourth to the first out of the seventh was freaking awesome. When he struck out the side on ten pitches–ten!–including a curve ball that seemed to touch the tip of Posada’s cap before streaking down and across the plate like a baby comet, well, you’d think Verlander was going to take this game to the cleaners, get the ticket, and pick it up to use in the World Series.

But the dude was still rusty. And the Yanks being the Yanks, they punished him when he faltered. Two runs in the first off our MVP/Cy Young man and you know the Bombers are going to win. Then lo and behold we push four guys across. The Bombers down 4-2 and then what? God damn if Verlander doesn’t have two outs–two outs!–before walking weaselly Posada and then hitting stumpy Russell Martin, and then serving up a triple to reedy Brett Gardner. God damn it all. How do you blow a lead on a walk to a guy with a .315 OBP and then hit the catcher? Stop, please, stop. 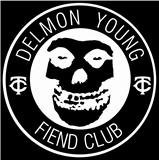 Well, our man Delmon Young came through, slicing an opposite field home run in the seventh, thanks in large part to my wearing my Delmon Young Fiend Club shirt (from the mind of Clarence Thrun.) The candle was lit upstairs, my Mark Fidrych postcard was propped next to my scorecard, and I’d forgotten just how effective the mojo has been thus far. It sent Young’s liner screaming over the distant fences of Willie Horton Stadium.

Then Valverde comes in because Jim Leyland, like most smokers, can’t taste flavor and has been deadened by a diet of Twinkies and Diet Coke and felt that he needed something to keep the blood flowing, and chaos and dischord is the only answer.

Maybe that’s all good since it was kind of cool to watch Mr. October strike out and leave two men on. Hoopla!

To make this game even more confounding was home plate umpire Gerry Davis’ bizarre calls. I swear that in the early innings C. C. Sabathia had a strike zone the size of a brick. Felt kind of sorry for him, I did. Maybe Verlanded had the same size zone, too, and hit those bricks nimbly, but in C. C.’s three innings, he walked five Tigers, and I have to say that there were a ton of balls that were awesome pitches, right down the heart of the plate. Not that the Tigers did a whole hell of a lot with them, grounding into three double plays in the first three innings.

Tonight sees the Tigers baby-faced Rick Porcello take on A. J. Burnett, who has been freaking awful. My concern is that the Yankee pitcher also had a few excellent games this year, including one against Cleveland in June where he struck out eight, scattered five hits and gave up a run… en route to a loss. Porcello’s had some good games, but he’s never really been dominant. And he’s capable of pulling shit like giving up five runs after being staked to a seven run lead (as in a late season Tigers contest v. Cleveland.)

No, tonight’s game is probably going to see a dominant Burnett, a decent Porcello, and a win either way by a single God damn run. And if the Tigers win Valverde will have saved it with the bases loaded on a walk, walk, balk, and hit batter, before striking out Robinson Cano on an underhanded pitch.

4 Responses to THE NEUROTIC TIGER: NO END TO THE WORRIES