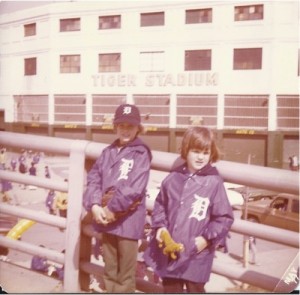 I invoke the power of Michigan’s greatest poet, Philip Levine, whose “A Walk With Tom Jefferson” alludes to the Detroit Tigers and Tiger Stadium.  I have just now lit the candle at the Shrine of the Tiger. It’s heavenly light shines upon Mark Fidrych, Alan Trammell, Sparky Anderson, Al Kaline, Norm Cash and current Tigers Justin Verlander, Max Scherzer, Brandon Inge, Austin Jackson and our man in cigarettes, Jim Leyland.

Levine, reigning Poet Laureate, the man from the City of God, wrote, in his marvelous “A Walk with Tom Jefferson”:

On August nights I come
out here after ten
and watch the light rise
from the great gray bowl
of the stadium, watch it catch
a scrap of candy wrapper
in the wind, a soiled napkin
or a peanut shell and turn
it into fire or the sound
of fire as the whole world
holds its breath. In the last
inning 50,000
pulling at the night
air for one last scream.
They can drain the stars of light. No one
owns any of this…

I invoke the memories of Ernie Harwell, of the Bird, of my Grandma pausing from her canasta to snicker happily whenever the Tigers would score a run.

Today is a new day and a new God damn game. Go get ‘em, Tigers!

by Peter Schilling Jr. Posted on October 2, 2011
This entry was posted in The Noble Sport: Baseball and tagged Detroit Tigers, New York Yankees, Playoffs, The Neurotic Tiger. Bookmark the permalink.