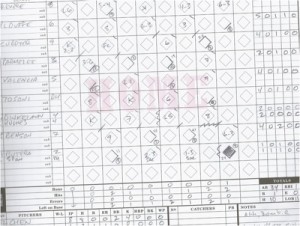 “I sure do wish that Danny and Gordo would wear helmets if they’re going to ride that Harley all the over the field. They might hit TC, and that would be a disaster for everyone involved…”

“What I want to know is this: we got one of the best fields in all the majors and they grind on it with a motorcycle? I bet those fuckers at Harley aren’t even paying for this privilege.”

“Pshaw. These kids need to know that’s not good for your lawn to ride a motorcycle like that.”

“So if Boston loses and Tampa loses and the Cardinals lose and the Braves lose, who goes to the Wild Card?”

[Sighs] “It’s like I told you: they’ll have a one-game playoff if there’s a tie.”

[Clearly flummoxed] “No, this is the Wild Card.”

“You do in baseball.”

[Snorts dismissively] “Where’d you hear that?” [The guy next to him joins him in his scorn.]

“God you guys are–listen, this has happened before, you know, with the Twins and the Tigers two years ago? And Chicago a year before that…”

[Laughing] “Yeah, for the division! Not the wild card. Where do you get this stuff.”

[Defeated silence] “Oh. I guess it must be true. [Silence] I’m rooting for Tampa, then. I don’t care about the National.”

After finishing off one of those tepid looking raw fruit kebabs: “Well, that’s that. I’ve eaten one of everything in this park. But I wish I’d saved the best for last. I guess it was fitting for a hundred-loss year.”

“You know, after seeing that Contagion movie, I was thinking you could really start something awful right in here. In this stadium. Think about it–you get some guy near the dugout, coughing, and BAM! The players are sick. Kind of makes you wonder if maybe something like that really happened this year–Joe’s got walking crud and Gardy was out with something viral in his ear. It makes you think.”

“I want to see a can of Spam, some lutefisk, and Prince race. Wouldn’t that be something?”

“That’s left field. And his name is Joe, too. Joe Benson.”

[Together] “Oh, the Joes are TOTALLY HOT!”

“Losing this many games doesn’t feel right here. Every game, it seems like win here, it’s so damn pretty. I swear, they should’ve played this game at the Metrodome, just for the shits and grins of it…”