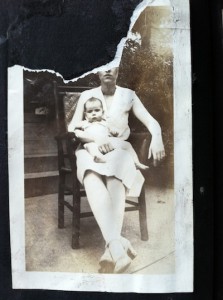 From genuine estate sales to foreclosure sales to the person who’s simply downsizing, you will almost always find old family photos. A scrapbook, a framed portrait from a Sears studio, an old black-and-white picture from generations ago, sometimes even slides or an envelope of developed photos from a drug store–they’re yours for the taking.

Seeing a bunch of family photos always raises intriguing questions for me, all extensions of the one great existential question: why? Why sell pictures of Uncle Dan or Dottie when she was a baby, why put a price on a box of old slides from our trip to the lake cabin in 1988? Why?

Maybe the family’s digitized all the photos, and doesn’t want the paper. Fair enough, but if I were to do that (and my relationship with digitizing shit is so fraught with error that I would never rely on that medium), I certainly wouldn’t turn around and sell these things. But you see it all the time.

Like this weekend. Janice and I hit six sales this weekend, from St. Louis Park to South Minneapolis to Edina, and we found a lot of scrapbooks and old photos… and I even bought one. Honestly, I might have bought more if the dealers weren’t selling them for top dollar. 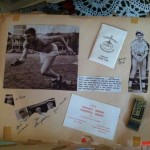 We always hit sales in St. Louis Park, since we live there and it just doesn’t make any sense to avoid your backyard. The first sale was uneventful, a white rambler in a nicer section of town, a manicured lawn with zero landscaping, the inside fairly clean and neat. But there was a nicely detailed scrapbook, filled with photos of some gentleman’s athletic accomplishments, invitations to a dance, a matchbook to some swank ballroom in New York City, pressed flowers. This man’s name wasn’t on anything else in the house–was he an old flame? And again: who would buy this thing? (Especially for twenty bucks…)

The second sale was the one that left us with some nice kitchen stuff for Janice, and was where I hatched the idea for this piece. This was one of the many post-WWII bungalows they tossed together in the 1950s, the kind of little boxes they used to say were made of “ticky-tacky”. This place was cramped and crowded, full of junk the owner had collected over the years, and it included a ton of utensils that had never been used, cookbooks, and other accoutrements that made Janice’s day.

But even better were a stack of large black and white portraits, from the late 19th century, two men and two women, who might have been distant relatives of the recently departed (there were no photos of of the lady who had owned the place.) These may have been reprints, and I didn’t think much of them (not enough even to take a picture), when a little girl ran up to the checkout and excitedly showed them to her mother.

Mother was impressed. “Ooh. I like them because they’re so creepy.” Five bucks later, that little girl, who did not look like some future goth, left to hang her new family on her bedroom wall.

From there we headed to Edina, land of the clean sales, to a pair  within a block of one another (and from different companies… odd.) The first was a very, very weird house, the outside looking like a sprawling 1970s-style McMansion (I know that predates McMansions, but this is Edina), whose inside looked like some kind of Spanish ranch home–exposed timbers, stucco walls, brick floors in circular patterns.

I don’t know anything about the owner, but she was a collector–of dolls, of Americana, of fine china, and, most interestingly, of photos of her family, or maybe someone else’s family. Hennepin County property tax records didn’t reveal a name associated with an obituary, so I’m not certain if these were people the owner knew or was connected to by blood. It also appeared as if this were a “downsizing” sale, as opposed to a true estate sale. 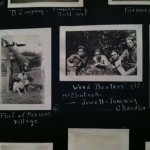 So: why would they sell family photos? And if they aren’t family photos, why did they buy them from someone else?

Then again, I bought one. There were about six of these albums, going for $25-40, way more than I’m willing to spend. These were really great, and appeared to be from one person–all were black leather bound, with black pages, and old monochrome photos with nice silver lettering (right.) I love this one–”Weedbeaters of 1921″, with four young toughs posing with cigarettes in their mouths. The fact that this was cool didn’t inspire me to fork over that kind of dough, however. 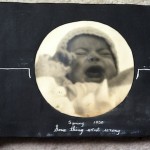 I found one slim volume for ten bucks, half filled, but what seemed to me to be the most charming of the lot.  This was for the arrival of the new baby, Miss “Anne” Temple, and I don’t quite get why her first name is in quotation marks, but there you go. You can see to the left a couple of paragraphs back with her mother, Willa, who is genuinely radiant. You can also see that beautiful handwriting, and the fact that the photo has been cut out lends an air of mystery, a touch of the weird. Whomever made this–Willa?–made some interesting design choices later, as you can see from the photo to the left, “Some thing went wrong”, and a crying baby (I’m guessing it was nothing serious, since there’s also a picture earlier that shows a concerned Anne with the caption “Hurry up and take it.”) 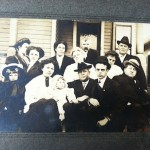 There were a stack of loose photos inside, including a few family portraits, like the one to the right. Is it just me, or does the fellow in the bowler look like a distant relative of Peter Dinklage? (Click on the photo and it will enlarge.)

I walked out with the album, a new water bottle, and, weirdly enough, a Magic Slate, one of those strange, cheap Etch-A-Sketch numbers, with a piece of gray film over black wax, and you write on it with a red pen that leaves an image on the film that you can erase by lifting it off the wax. What made this one different (and a fifty cents something I now regrettably own), was that it was promoting Sid & Marty Krofft’s freaky Lidsville show. Janice said “Get that away from 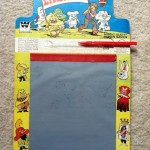 me” when I showed it to her in the car.

The sale around the corner was fairly worthless, a clean one with a bunch of overpriced clothes and furniture and coffee table books. But from there we hit a thoroughly depressing job in the Standish neighborhood in South Minneapolis.

This was a smaller bungalow, which had seen better days. It reeked of mildew, the inside looked like the home had been hauled from the bottom of lake and left in the sun to dry, the floors dark and worn, the walls stained. Weeds and scrubs grew up in front of the windows to keep the sunlight out. Sad. 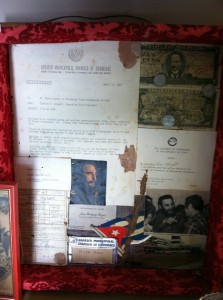 This sale had so little going for it I wondered why the company in question had bothered. In fact, the guy who ran the sale was bitching about losing money on a deal he’d made earlier, and complained that he had so much competition and yet so many homes to see, he hardly had time to make a buck. The people in question, the ones to whom he undersold, bought an old cast-iron tub. I can’t imagine what else would have sold in that place.

However, the family allowed him to sell off this strange old memory box that the departed had made many years ago, from his adventures in the late 70s to Cuba with a delegation of Minnesota businessmen. The dude met Castro! He had even foolishly taped a cigar to the thing–foolishly, because the thing had crumbled to dust.

Who would buy this gentleman’s memory of a trip to Cuba? They wanted $50–it wasn’t worth a tenth of that price (especially since it reeked of mildew.)

I’m no expert in the antique biz, but I do see old scrapbooks, photos in frames, albums and more at antique stores, but they never seem to sell. Maybe a framed photo from the 19th century would work to decorate a house, a restaurant, a bar, but a photo album? A scrapbook with old trinkets from your youth? A memory box dedicated to connecting with our comrades in Cuba? Beats me.

But I did come home with one book, and I’ve enjoyed looking through it, even as I don’t know what the hell to do with it now that I’ve written this piece. Stick it away on a shelf, I guess. However, I am reminded, as always, of the fleeting nature of our new technologies. I’ve lamented the end of books, of stamps, of postcards, and now I get to lament the end of these scrapbooks. And I’m not talking “scrapbooking”, but of people taking pictures, developing them, and pasting those in a book with names and dates and maybe a witty observation on said photo. Old photos, taken on a camera with film, typically meant you had to spend at least a few moments composing your shot, and you didn’t know what the result would be until you got the pictures back from the chemists a few days later.

Today, we can take pictures on our phones, and do–in abundance. Even our picture frames are digitized. And yet, despite the fact that people take probably thousands more photos than ever before (if only for the fact that it’s incredibly cheap to do so), we won’t have this photographic legacy. Most of these photos will disappear with the technology.

Good or bad, I don’t know. For now, I’m happy with my instant relatives, curious about the old cat photo, the weed beaters, and the life of the little baby Anne, who could still be alive. Of course, I’ll never know these people, or anything about them–we all disappear eventually. Certainly my curiosity over Baby Anne will wane, and I’ll get the itch to clean out my junk, and this scrapbook will go in a garage sale or straight to the curb. Then again, maybe there’s nothing wrong with these old images entertaining someone like me for a day, before vanishing into my closet, and then into a recycling bin a few years from now. 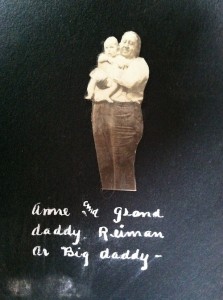 by Peter Schilling Jr. Posted on July 23, 2012
This entry was posted in Estate Sale Confidential. Bookmark the permalink.