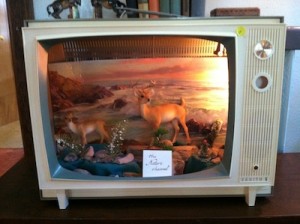 Back in the day, when it was a Sunday and the library was closed, and you had maybe five channels on your television set, no computers, no cell phones, no iPads, you had to entertain yourself with your wits and the toys and puzzles and distractions you’d accumulated in your lifetime. You read a book. You struggled with the yard or tinkered in your workshop. Gathering your children to the kitchen table, you’d cut through the tape on the cardboard box of a Space Age model, and then proceeded to build something from the future, all the while getting high on Tang and the fumes from airplane glue.

Maybe you accompanyed someone on the piano, or retreated to the basement to pay very, very close attention to that new Sonny & Cher album you just bought and were grooving to on your expensive stereo. Maybe you drew, maybe you birdwatched, maybe you canned fruits and vegetables.

It seemed that the people who lived in the homes we visited this weekend partook in many of these pastimes. This weekend we noticed a plethora of diversions, mostly accumulated in people’s old-fashioned finished basements, a relic of another time. For back in the day men installed bars in their basements, to entertain couples who played weird board games while slowly getting bombed. Probably people shrank into the basement in order to flee the oppressive heat of summer when their window unit was on the fritz. In many of the homes on our junket, we saw all the trappings of the lost generation of folks who didn’t have computers to distract them, but other items–games, binoculars, Viewmasters, and more. Much more.

This weekend, Janice and I were joined by ESC Special Guest Stars Gabe and Faith Angieri and young Clementina and Gabe’s daughter, Denise. We hit a total of ten sales between Friday and Saturday, and though none of us managed to bring home an incredible treasure, the trip itself was surely memorable. 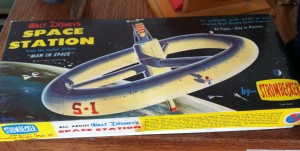 Friday was strange–there were literally thirteen sales featured that day, which might be some kind of record, and there weren’t nearly as many on Saturday, usually the busiest day in this world. Our first stop was just a hop and a jump from our home, in the Willow Park neighborhood of St. Louis Park, those ramblers off Cedar Lake Road that seem to me like the 1950s personified. This was the home of a man named Harry, and I’d say right off that I liked this gent, just from looking at all his stuff.

According to his obit, Harry enjoyed “walking, reading, working crossword puzzles, gardening, traveling, and spending time with his grandsons.” And you can see that he had a lot of things for those grandsons to do in his house. There were puzzles, games, tons of books on science for younguns, lots of models, including the weird Disney Space Station (above) that looks like it was old Walt that inspired Kubrick’s 2001, or vise-versa. There were lots of pleasant framed prints, and these strange cartoons around the house (left.) 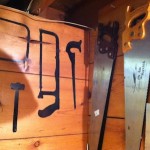 There was also the fun basement, a wood-paneled room where the kids probably spent many an hour playing cards on the card table, or being served root beer as if it were Budweiser. There was a player piano that hadn’t been used in forever, but it still worked. And then there was the tool room, with its meticulously painted shadows on the wall where each tool had a home. If my hunch is correct (and I’m guessing it is), Harry probably did this as much for the son and grandsons as himself. It reminded me of my own father’s maxim: “What’s the most important thing to remember about tools? When you’re done, PUT THEM BACK WHERE THEY BELONG!” 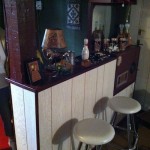 From there we ended up in the King Field neighborhood of south Minneapolis, the home of Mildred, a collector. I couldn’t find an obituary for this lady, but she had a lot of little items, and that very strange television set diorama at the top of this piece (and which the estate sale company advertised as “The Nature Channel” and tried to sell for twenty bucks.) A few books, a bunch of trinkets, in a pleasant little home across from a towering senior center. And downstairs, a weird little basement bar, with white paneling (left), and a bunch of drinking memorabilia. She also had a ton of ashtrays, which made me wonder how the heck she managed to keep the place so clean… 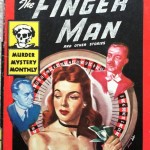 From there it was to the upscale suburb of Edina, the home of a collector who wasn’t deceased, but now trying to unload all the crap they’d collected that didn’t increase value–a bunch of old magazines, a ton of school lunchboxes from the 70s and 80s, and a wall full of those Department 56 “collectables”. The lunchboxes were north of $20, rusty, and not worth $5. But I did find a cheap paperback of Raymond Chandler short stories (right) and since he’s my favorite writer, I was flying.

There were a few more sales not worth mentioning, and so we turn our attentions to Saturday. Joined by Gabe and Faith and two kids (one two, the other fourteen), we found ourselves at a gorgeous home in St. Paul’s Summit Hill ‘hood, a moving sale, where Faith found a pile of cool costume jewelry, and I was feeling happy with my cheap iPod dock, which I can use to loaf in the front room and listen to baseball on my phone while I drink. 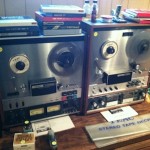 But I digress. From here we found ourselves in the Hiawatha neighborhood, just past the border into the larger of the Twin Cities. This was a pink bungalow, with another player piano in the foyer! This sale was overpriced, but fascinating–Gabe inquired from the daughter of the owner, who hadn’t died but was in a nursing home. There wasn’t a whole lot to take in, until I hit the basement, where someone had their audiophile set up away from the ears of the people who just didn’t appreciate that cool sound. 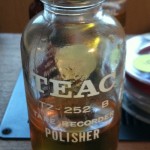 I’m old enough to remember the oft-used term “audiophile”. You’d see in a number of men’s magazines, like Playboy and Sports Illustrated, ads for the newest stereo technologies that took some sort of engineering degree just to get them set up and working right. This dude (and I’m guessing it was a dude, as audiophiles were usually men) had the works, even a reel to reel tape player, and a bunch of tapes, including Sonny & Cher, Johnny Cash, the Turtles, and more. He even had a bottle of tape recorder polish! Dedicated, man, dedicated. 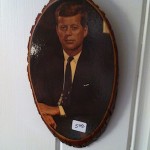 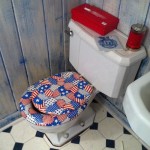 From there, it was the home of a patriotic teacher, whose basement served as both a historical retreat, and a celebration of intellectual patriotism. This was a little home in Edina, very clean and pristine, filled with nice, clean, overpriced antiques. According to the obituary, this little blue home was owned by a woman, Lavonne, who was a history teacher, and someone who seemed to celebrate her craft. The basement was chock full of old history books, and every inch of wall space covered with artifacts of the presidents, including silhouettes of George and Martha Washington, this wood souvenir of the Kennedy administration, and more. Flags were everywhere–even the bathroom was decked out in patriotic colors! 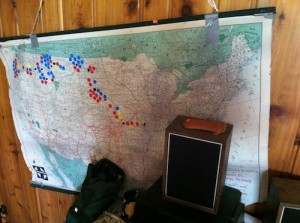 Denise found a pair of crazy-colored shoes, and I scored some cheap Life magazines, and from there we concluded our jaunt in Edina, at a beat-up but comfortable Edina rambler surrounded by an unkempt lawn that I found very comforting, actually. This was the home of Arden, a gentleman and scholar, who in his retirement gave back to his community by volunteering in various nature centers in the area, and who once was awarded Minnesota Tree Farmer of the Year. Arden was an intense birdwatcher, who had volumes of books on birds, journals of Audubon, and every conceivable guidebook in print. Not content simply to enjoy this pastime, he mentored, taught, and even contributed over two decades of personal research to something called the Project Feeder Watch for Cornell University Ornithology Laboratory. Whew. 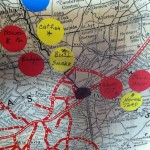 Arden had let a lot of his house go–after all, he passed away at age 86, and probably had no interest in leaving his comfy home for a condo, for god’s sake. But the books all smelled funky, and his basement had a decidedly swampy feel to it, as it was the usual wood-paneled place that would at one time have been cool and dark and a nice retreat to drink or play games, or read books or have meetings of the local birdwatching group. But like many people of that time, they also didn’t think an investment in proper drainage or a dehumidifier was necessary. This was tragic, because there on his wall was a gorgeous Soo Line Railroad map, replete with little dots where he’d seen fascinating examples of wildlife.

I would have bought this thing in a short second, but it was also dotted with mildew spores, and touching it made the thing rip and flake–it would have been impossible to even put into the car, as rolling it up would surely tear the thing. I think the dealers knew this, as we were there late in the day and it was still there despite a two-dollar price tag. But it was so nice to gaze at–the thick red lines where the Soo Line Railroad made its way across the country, and what was obviously the route of a camping trip where Arden and Co. saw a bull snake, cat fish, horned toad, and more. Maybe he was sharing time with kids or grandkids, as it seems like some of these would astound a child, but not an adult (I might be so thrilled to mark my coming upon a catfish.)

This was a sweet little reminder of a man’s life–it seems to me that Arden made it a point to duly record the details of a life he found precious. His records helped save various forms of bird life, too. That’s wonderful, if you ask me.

I’m not going to argue that today’s generation is lazy or unconcerned about society, because I don’t believe that, not one bit. Despite the presence of iPhones, iPads and video games, I’m also seeing the younger generation being involved, making things, doing the same stuff that guys like Arden did. After all, the guy who spent hours polishing his tape deck didn’t necessarily do much else to help society.

But I do enjoy visiting those old, cozy wood-paneled basements with their bar and drinking and smoking accoutrements, their shelves of board games and books, ping pong tables, and the like. We still like playing games–I love board and card games, and know people who play and design them–but we can get out a bit more, become connected a bit more thanks to Facebook, Twitter, and the like. And I don’t know that that’s a bad thing. Times change, and with them, the tastes of each generation. After all, those bars and board games didn’t exist a few generations before that, either. The basement pleasure palace was a fleeting moment of fun in America, and I’m glad I’ve had a chance to witness the tail of these wood-paneled comets. 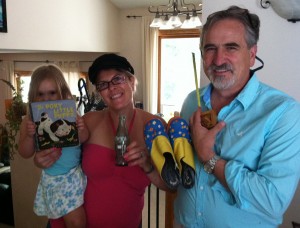 by Peter Schilling Jr. Posted on July 31, 2012
This entry was posted in Estate Sale Confidential. Bookmark the permalink.