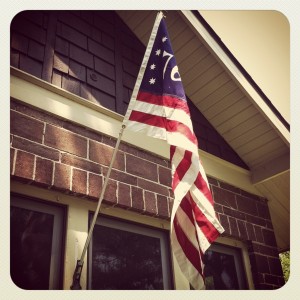 This past Independence Day, I finally got around to hanging a flag. Many weeks ago, I found an antique mounting bracket that held the banner at a sharp angle, and thus over the ever-encroaching shrubs that cling to the front of the homestead. At an estate sale ages ago, tucked away on a bookshelf, I found this replica of the Bennington Flag, which also happened to be the same one my Grandpa Schilling used to fly.

I dig flags. Frankly, I’m also getting a bit sickened by the way the flag is used nowadays, especially as a toga for so-called patriots. I wish more people flew the U.S. flag, the good people in my life, the people I see working their tails off to make this country great. For Old Glory doesn’t just symbolize our military triumphs and our ability to make a buck pushing Buicks out the door; it symbolizes all the things that made the United States so great (and which often aren’t celebrated): Walt Whitman, jazz, the Stonewall Riots, Susan B. Anthony, Malcolm X, the Civil Rights movement, Jackie Robinson, comic books, Kara Walker, Kurt Vonnegut, A.I.M., Lester Rodney, Daniel Berrigan, Cesar Chavez, John Carlos, Dock Ellis, etc.–all the people, of every stripe, who struggle to make us truly free.

I was thinking about this as I made my way through an amazing sale near the shores of Lake Calhoun here in Minneapolis, a sprawling 70s home, with floor-to-ceiling bookshelves in every single room. This was the retreat of a man I would describe as a patriot–a prominent lawyer, family man, activist and avid reader, who seemed intent on repeatedly challenging his own beliefs throughout his lifetime. That he was once married with children and a highfalutin Republican with ties to Ronald Reagan who later came out of the closet and found himself a vocal opponent of George W. Bush only makes his story that much more complex… and profoundly American, if you ask me.

After a breakfast meeting, I made my way to this first sale, having stopped there a few weeks earlier to score some free National Geographics for an artist friend. As we wandered through the home, we were stunned at the number of books. Books in every room! Books in closets! And a variety of intriguing DVDs, including a shelf of Akira Kurosawa! I knew I had to come back, so there we were Saturday morning.

To get to this place, you had to take the mysterious Rose Lane on the west side of Lake Calhoun. I’d driven by that dark street many times, always avoiding it and thinking a cop would probably gun me down for trespassing upon the boulevards of the uber-rich. The house in question was certainly not the home of a bum, but being situated behind a tangle of thickets and scrub trees, eschewing a manicured lawn, and having to take a gravel driveway to get to the garage did make it a bit different from the pristine homes that surrounded the place. Once inside, I found that it was probably unlike most of the homes in the neighborhood. Hell, in any neighborhood. 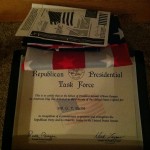 The gentleman in question was a lawyer for one of the most powerful firms in town. His name was Gerald, he went by Jerry, and he had been a fairly straightforward citizen: married with three children, a good lawyer, and a man who struggled to see that the Republican party rise to prominence in 1980. This was evidenced in the “flag” section of the sale, where I scored a nice Valley Forge number (I needed a new flag since the colors of my Bennington flag ran in a brief downpour–I’ll let you make the snarky remarks, thanks.) There was a box containing a certificate from President Reagan, and a flag… though it was quite literally the cheapest fucking flag I’ve seen. One piece of vinyl with the damn flag printed on it, nothing stitched. I’m guessing that Jerry gave some pretty decent coin to these cheapskates. Man, I’d be pissed. And yet what do we see? We see that Jerry kept this trinket, and in perfect shape. 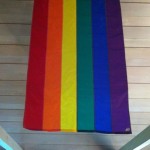 Jerry loved his American flags (I counted seven of them at this sale, most never having been removed from their packaging), though he also waved his rainbow flag proudly (right.) This hung prominently from the rafters of the upstairs reading room and could be seen upon entering, as did the blue and yellow equality flag in the front entrance. 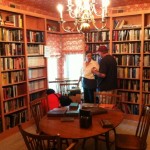 As I said, this was a man who read. And I mean read–there were walls of bookshelves in the living room, in the ornate dining room (left) in the bedrooms (and in the bedroom closets), upstairs in every corner of the loft and guest bedroom, and throughout the basement, including the weight room, and the disco and billiard parlor. 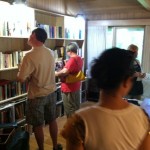 Wait–what? Before I get to that, let’s talk about some of these books. Jerry loved to read–”his lifelong love of learning resulted in an ever-expanding book collection,” his obituary claimed, and that’s as true as the Mississippi is wide. I spent a good hour during my first visit (I came back that afternoon with Janice), and emerged with an armload of books. Poetry, drama, coffee table books on art and architecture (Jerry had two partners, one of whom died of AIDS, and both were in an architecture concern), books on music and songbooks (there was a grand piano), many thousands of biographies of politicians, dignitaries, artists, playwrights, poets, and filmmakers, and scattered throughout lots of fiction and novels and travel guides. Hollywood Babylon Parts I and II were found beside Van Gogh’s letters, the Latin Eclogues, a biography of John Cheever, an illustrated Alice in Wonderland, and more. All this after two used bookstores hauled thousands of tomes away a few weeks ago. The mind reels. 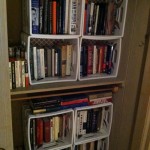 Jerry’s house was a comfy place to read. It was flat and wide, with dark wood paneling on the main floor, and giant windows that looked out on nothing more than a forest of trees and underbrush. Mark, the man in charge of the sale, mentioned that no one wanted the house, so it was going to be razed, and the vast jungle in the backyard would be cleared away for a view of a golf course. This seems weird to me, but I’m not buying the place. I liked the spaciousness of the home, and the way that the house seemed to retreat when you entered each room, giving it a sweet coziness as well.

So we see that Jerry and his partner liked to read. They enjoyed eating and entertaining, as their kitchen and its accoutrements were brilliant. They watched a ton of movies, and sought out obscure and interesting titles (Kurosawa, Ozu, Hitchcock, Renoir, to name but a few.) They dressed well (I scored a gorgeous coat of Scottish wool), loved to travel, and were active in their community. 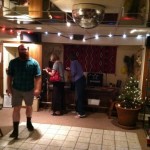 And, man, they loved to party. The basement was the party room, wherein we find, well, the disco and billiard parlor. In the largest room downstairs Jerry had installed a gorgeous pool table with a red felt top. Of course, the table was surround on all sides by books. There was also a couch and a pull-down screen, where no doubt they held viewings of Kurosawa. Perhaps other choice titles, I’m guessing. 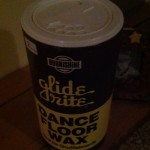 But check out that dance floor! Disco ball, tiled floor, even a bench on the wall where fatigued dancers could sit down (and it included a brass rail to rest your feet.) Colored lights, stereo, masks for a masquerade, a full bar whose brass rail was held aloft by elephants’ trunks (a nod to his Republican past, perhaps?) They were selling a container of Glide-Rite, a wax that keeps your dance floor gleaming–Jerry liked to keep his place spic-n-span. 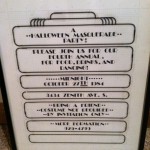 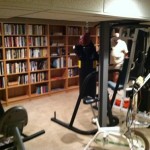 One of the great parties must’ve happened in 1984, for there was a framed invite to that soiree. I imagine incredible dinners, conversation, and then, downstairs, dancing, pool, and, if you so desired, a workout surrounded by books, mirrors, a TV, and semi-nude photos of ripped young men. “I feel myself getting pregnant just being down here,” quipped one of my cohorts.

This was one of those remarkable sales where the personality of the individual shines like a bright light. Jerry was a loving man, and well loved. In one photo album, there was a card bearing the name of a man who was not his partner at the time of his death, maybe the man who passed away from AIDS long ago. You can go online and still find Jerry’s Amazon wish-list, whose titles would only have increased his already impressive library: Moral Disquiet and Human Life by Monique Canto-Sperber, Confessions of an Original Sinner by John Lukacs, the Lord of the Rings trilogy on Blu-Ray. Still going, even up to the end.

Call me a fool, but Jerry strikes me as a model American. As I wandered through this place, I couldn’t help but think of FDR’s “Four Freedoms”, especially number four: Freedom From Fear. I mean, really, what more do we want? Jerry not only pushed himself to be a thinker, he was a thoroughly complex thinker, one who was dissatisfied with staying pat. He was active in the Gay & Lesbian community, just as he had been active in the conservative community when he was married and seemingly straight. He celebrated life, he celebrated his friends and family, he celebrated being a thinking American, and we don’t have enough of that.

Jerry came out at a time when admitting you were gay probably meant you faced a lot of discrimination and hate–perhaps not as bad as the 60s and early 70s, but worse than today. Being a Republican, I’m sure he was an instant pariah (and would be so today as well.) This wasn’t the house in which he raised his family, but the place he had bought (or built) to retreat from a world that was slowly, so slowly, discovering that people like him were actually as decent and valuable as everybody else. Jerry probably needed this place. I bet he shared it with others who needed it, too.

It sickens me the way that this country has to keep destroying its best citizens–from drafting kids in Vietnam to devouring the poor in the current wars, from keeping African-Americans from voting in the years before the Civil Rights movement (and even today, to go by recent legislation) to telling gays and lesbians they’re perverse, this country so often throws a cloak of fear over its people, and it keeps us from being truly great.

Case in point: Jerry and his family. Certainly fear drove this man to hide for many years. This former Eagle scout (and Vigil Honor member of the Order of the Arrow?), veteran, Yale Grad, a man who wasn’t content to make money but had to be involved, who had to push his intelligence constantly, probably even to places it didn’t want to go, this man couldn’t just be left alone to make America a better place.

I ask: When will we give ourselves the freedom from fear we promised Europe just before the second World War?

The Organization of American Historians, of which Jerry was a member, honored him in death with this excerpt of  Wordsworth’s “Splendour in the Grass”:

What though the radiance which was once so bright
Be now forever taken from my sight,
Though nothing can bring back the hour
Of splendor in the grass, of glory in the flower;
We will grieve not, rather find
Strength in what remains behind…

This Jerry, whose house I was fortunate to visit while it still retained remnants of his happy life, leaves a lot of strength behind for this world. Would that this country recognized that more, from every one of its people. 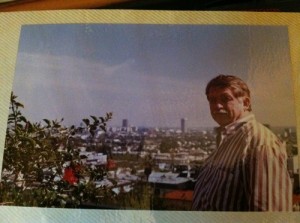 by Peter Schilling Jr. Posted on July 9, 2012
This entry was posted in Estate Sale Confidential. Bookmark the permalink.