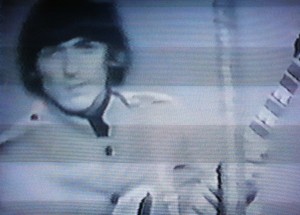 Let’s be honest: thanks to technology, a lot of the things we’ve come to know and enjoy in this life are coming to an end. This isn’t just a lament on the death of records or VHS tapes–though it will be that–but, if we’re honest, we’re probably going to see the end of print newspapers, books on paper, and most likely the post office and even public libraries. I don’t want this to happen, but the way things are going I cannot see avoiding this fate.

If you feel it in your heart and ache over the end of libraries and the post office and what not, I’m with you. However, is our pain any worse than the people who could not believe that they would see the end of the horse-drawn carriage? How the quiet of that simple technology was being replaced by racket, by grease, by inhumane factories and gas stations and what-not. Horse-drawn transportation? It existed a lot longer than any of the dying arts mentioned in that first paragraph. And with its end came the end of a way of life for millions.

Now look around you: from your books to your iPads to your TVs to your MP3 player, in a generation or two they’ll be worthless.

I was thinking about this as I bought, with trembling hands, a pair of VHS tapes of the Beatles–Let It Be, their monumentally depressing final movie, and one simply titled “Beatles Promotional Films”, both clearly bootlegs, grainy, quaking in spots, but with material I’ve never seen before. You can probably find these on eBay if you look hard enough, but hell, there they were for cheap, and I’ve been eager to see Let It Be for years. You find a lot of VHS tapes when you hit the circuit–this weekend was no different, dismal though it was. In fact, from the homes of the newly departed to the homes of the middle aged downsizers to the poor folks who are having their homes taken from them in foreclosure, you find old, dated technology.

Janice and I hit eleven sales this weekend (and a garage sale), found some decent stuff, but this was one of those weekends mostly bereft of fascinating sales. A couple of moving sales were unbelievably overpriced, with things like $25 9″ television sets that are only going to end up in a landfill. 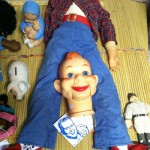 After wasting time at one of those in St. Louis Park, we ended up in the Lowry Hill section of Minneapolis, at a comfortable home facing Kenwood Park. Lots of strange stuff here, including this Howdy Doody doll, whose head was, uh, placed in a rather uncomfortable position. This was a very clean sale, with a few very nice books, household stuff, and strange art, like this mash-up of golf and Michelangelo. I like that God has a big belly. 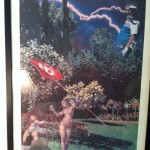 From there we headed to south Minneapolis, the Tangletown neighborhood, and a great big home full of weird antiques, and cat memorabilia. This was a massive stucco mansion, painted a light lavender. Inside, there was a great deal of expensive antiques, not necessarily overpriced, but the kind of stuff it seemed that only dealers would want. 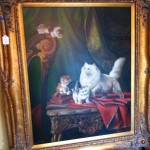 Or cat lovers. There were cat pillows, small cat figurines and statues, a cat door knocker (it looked like it was old, but made in China and probably something you can get at Bachmann’s for thirty bucks), and this very odd, and very expensive feline art (left.)

This sale we also hit the mini-jackpot. Janice pointed out an Alessi one cup espresso maker, still in its package, a very high end piece of coffee ware, that we bought for $15. I’d heard of these, and wondered if it really did make great coffee. Well, I’ll never know, since they go for upwards of $60 on eBay, which is where I’m selling it right now. Since it’s already got a bid for $40, it looks like this sale netted us a small profit.

Which of course I promptly lost over the weekend on the usual Life magazines and used books and other stuff I’ll peddle for cheap at our garage sale later this summer. But I digress: from here it was west, to Minnetonka and Wayzata, a pair of sales off Minnetonka Boulevard, that yielded nothing of interest to buy, but had more obsoletisms. 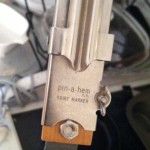 Like this Pin-A-Hem skirt marker. I found a few on eBay, but hell if I know what it is, except that it’s to assist those talented people who can actually make their own clothes. You know, it helps them mark their skirts. Or pin their hems. Or skirt their pins? You tell me. 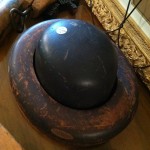 This sale was full of antiquey doo-dads like that one. There was a “chopper”, this weird mechanism with three blades, to make chopping easier. And then this old, wooden hat stretcher, to keep that damp bowler from shrinking. I do have to admit that my first thought was that this thing had to do with hats. I suppose because it looks like a hat. So maybe I’m not a rocket scientist…

But again, we found ourselves in that mini-museum mode: crazy stuff to look at, nothing to buy (I don’t need an antique wood hat stretcher, thank you very much.) From here we headed farther west, to Wayzata, to the home of Susan, a celebrated volunteer and collector of wonderful things, like quilts and jewelry, and who lived in a gorgeous old “Connecticut-style” farmhouse. It really did look from the 18th century, and it was tastefully decorated. But there was nothing to buy, little, even, to gawk at, unless you like old quilts.

Sunday found me hitting a few sales, mostly in an attempt at nabbing for free, or nearly free, old magazines, encyclopedias, TVs and mugs for a top secret art project a friend is exhibiting in the fall. Two of the sales–in Golden Valley and New Hope–were fairly dismal, but yielded even more outdated technology. 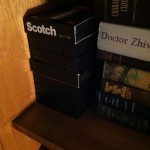 If you ever go to the “digger’s sale”, the sales where there’s piles and piles and piles of junk, on tables and in boxes beneath tables, in stinky basements and roasting attics, magazines with rusted staplers, clothes that reek of mothballs in piles on old stained beds… well, you’ll find VHS tapes. You’ll find VHS players. In this house, there were stacks of video on shelves, movies, stuff recorded from TV, the works. Someday, someday soon, you won’t find movies–everyone’ll be downloading their flicks, and we won’t see DVDs or VHS tapes.

But the VHS is intriguing to me, in part because it’s so clunky and not as accessible. See, DVDs that really opened up to movie collectors, with their inexpensive price tags, convenience, and all those extras. VHS tapes could be very costly–they used to cost $99 all those years ago, meant only for purchase from Blockbuster, etc. The tapes were bulky and not fun to maneuver to get to a favorite scene. DVD ushered in the chapter, the extras, better packaging, and you could fit two where one VHS tape existed.

But I reminisce about VHS because I was a conscious adult when VHS first hit, so I remember the shocking transition–and, trust me, it was truly shocking–when you could actually watch a movie at home, your choice, and control it. My best friend had a VHS player, and we’d go down to the Video-To-Go and rent a bunch of horror movies or classic fare. Since this was Mt. Pleasant, Michigan, the store didn’t have a lot of classics–the Seven Samurai, Kane, Singin’ in the Rain, everything Hitchcock–but you didn’t get Wim Wenders or Mizoguchi or even Bergman. So horror, which they bought in abundance, often fit the bill. That’s where I saw Evil Dead 2 and the great Honeymoon Killers, which is creepy.

We now have movies at our disposal. Every movie, virtually all the time. Go on eBay and you can find stuff that’s out of print even–as I mentioned, I stopped by a friend’s place to visit his garage sale, and emerged with Let It Be. Never released on DVD. But you can get it on DVD, some bootleg foreign job, and probably a far cry better quality than my aging videotape.

But now it’s going virtual–you can stream books, movies, music. And as I said, and I don’t mean to be pessimistic, but if the younger generations are buying their entertainment this way, and pretty much only this way, then our methods of entertainment–of clunky books, records, VHS and DVD or Blu-Ray–are about as realistic as the horse-and-buggy once was.

And I have complex feelings about this, I have to admit. On one hand, I lament the tangible, the tactile. I lament paying for something and then owning a thing I can hold in my hand and place on a shelf. I doubt streamed films are going to have director commentary, as DVDs have provided. We are truly in the age of the cinephile, as companies like Criterion are making wonderful products. I’ll miss books, new books on paper, in hardcover and paperback, the bookstores, the libraries. I already miss the newsstands, and I’ll miss the joy of receiving a magazine in the mail.

As you can tell, I will desperately miss finding old magazines at garage and estate sales. Just as I don’t find much stuff from the 1930s and earlier, so, too, will the magazines go away. By the time I’m old, there won’t be Life magazines at estate sales.

But on the other hand, this stuff is costly. Every book and newspaper, every old Life, all those copious stacks of encyclopedias and religious books–this weekend, there was at least a dumpster’s worth of lousy books–every one was carved from a tree. That’s a lot of trees. 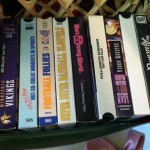 Every VHS tape, DVD, and the machines that play them? Well, that’s oil. Oil that had to be bled from the earth, processed, at times leaked into the ground or blasted and gushing into the Gulf of Mexico. We kill and die and murder people for oil. In many cases, just to make a tape of Super Duper Baseball Bloopers.

Is it worth it? I honestly don’t know.

We lament them. We are saddened because that technology provided happy moments. It destroyed certain things–maybe home movies are hurting the theatergoing experience. But just as the locomotive was harbinger of destruction for the natives of America, and then later an aging technology we romanticize today, so too, go all these mediums of communication.

Someday, perhaps, some kid will be writing his own estate sale blog and asking the same of iPads. 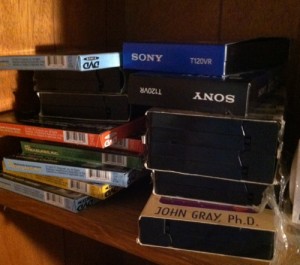 by Peter Schilling Jr. Posted on June 25, 2012
This entry was posted in Estate Sale Confidential. Bookmark the permalink.