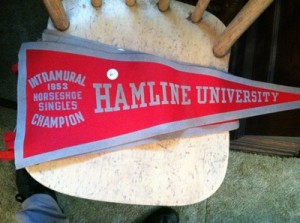 Some weekends, running the estate sale circuit is like going to a series of private museums, as if the grump who made the House on the Rock had franchised his tourist trap around the neighborhoods of Minneapolis. By this I mean that there are times, quite a few in fact, when you hit house after house and don’t end up buying anything. Nothing. Cool stuff is to be had, sure, but who really wants, say, someone’s collection of Hamline University 1953 & 1954 Intramural Horseshoe Championship Pennants?

The answer, I’m guessing, is no one.

Admittedly, we did buy some stuff, as did ESC Special Guest Star Holly Petersen, but for the most part this weekend was marked by various collections of really interesting and intriguing items that, well, you just wanted to look at and then move on. 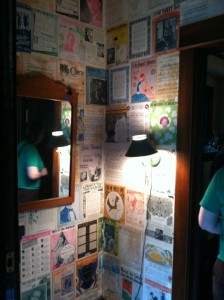 Janice and I hit the circuit on Friday, starting at a Linden Hills two-story home that had seen better days. But we thought this place might be a gem, considering the foyer was wallpapered with old sheet music (right.) 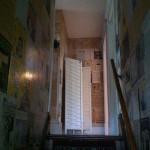 So cool! Actually, the whole house had sheet music wallpapered throughout. In fact, it seemed as if the person in question (no names were found) had a penchant for the art of wallpapering–in the teenager’s room, the closet was filled with posters, not tacked to the walls, but glued, including one of Peter Fonda in Easy Rider. We had a good time, wandering through the home and admiring the handywork, but obviously you can’t buy chunks of plaster (and even if you could, I wouldn’t.) There were a few books, a box of old knives, some games, and, damn, not much else. Janice bought some sleigh bells for a buck, and they clanged around in the backseat on the rest of the drive.

The best find was in one of the worst sales of the weekend–well, not the worst sale, because of the Saturday “estate sale” which was actually a garage sale (lousy even by those standards) in a house that made me want to spit in frustration. Friday’s silly sale was another garage-in-a-house sale, far from an estate sale, with half the rooms taped off from inquisitive buyers. It started so unimpressively that Janice said “let’s get out of here”, but I wanted to see the place since we were there. Each room was half empty, with junk–stuff that the owner clearly didn’t want, which is, as I’ve said before, the very definition of a garage sale. 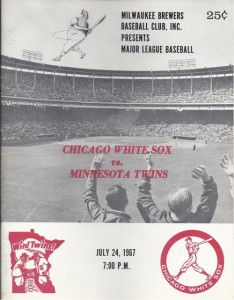 Except in the back bedroom, where the “valuables” case was featured. Here was a stack of old Twins and Vikings yearbooks and scorecards, fairly overpriced. Of interest were a pair of scorecards, one from “Bob Allison Day” at the Met, and the other, the one I bought (Bob Allison was pock marked with mildew and $20–not worth a quarter of that price), was totally unique in a variety of ways.

First of all, let me admit that I am an unrepentant scorekeeper at baseball games. I love to keep score, and feel like I don’t really get into the game unless I’m scribbling down my silly hieroglyphs for every at-bat. I also like to collect scorecards and scorebooks, especially if they’re old (1980s onward are still pretty ugly–it’ll take a lot of time before the advertisements from that era start to become interesting.)

This particular scorecard, though, is damned unique. That doesn’t mean it’s worth anything, necessarily, but it does mean that I will cherish it like the greedy miser I am. It’s your typical scorecard in the sense that it has ads for beer and soda, hot dogs and some guy’s restaurant, photos of unpleasant executives with acid indigestion, the scorecard itself, names of players, and a one-page tutorial on the art of scoring. What makes it weird is that it was from a mid-season exhibition game betwixt the Twins and White Sox, in an effort to lure a big league club back to Milwaukee. An historical anomaly, right there in my own hands!

A brief history: in 1966, the Milwaukee Braves abandoned that city on the lake for the lusher and theoretically more lucrative city of Atlanta, Georgia. Milwaukee grieved terribly, and did everything in its power to lure yet another team, or an expansion franchise to its environs. To convince the honchos at Major League Baseball that the city was still “major league friendly”, they staged a series of exhibition games, all of them featuring the Chicago White Sox, in Milwaukee County Stadium.

Note that the abandonment of Wisconsin’s largest city had nothing to do with building of a new stadium, but rather, was tied to slightly decreasing attendance (the Braves were still pretty good, but continued success still results in fewer fans) and not the need for a new stadium. Milwaukee County Stadium, all of thirteen years old, was still considered kind of a gem. And now it was empty.

As one wag in the November 13, 1967 issue of Sports Illustrated put it, upon the announcement that the Sox were going to play nine regular season games in Milwaukee: “Three things contributed to the shifting of the games. In July of this year the Sox played an exhibition in Milwaukee against the Minnesota Twins and drew a crowd of 51,144 at major league prices. No other team in the majors drew a larger crowd without giving away bats, balls or caps.” 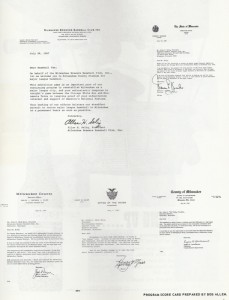 With a baseball game comes a scorecard, and this is a neat little number, full of fun surprises on every one of its few pages. And frankly, Milwaukee makes it even more fun. Having read Howard Bryant’s great Hank Aaron biography, Milwaukee sounds like a cool town, especially in the heyday of the Braves. Even its name–Milwaukee–is refreshing on the ears, sounding as it does like beer being poured from a bottle into a glass, and conjures up images of quaffing a Schlitz from your log cabin porch on Lake Michigan. Open the front cover of the scorecard and inside you find a page with reproductions of five letters from Bud Selig, president of the Milwaukee Brewers Baseball Club, Inc. (so they had the name of their team already picked out even in 1966), inviting various dignitaries to attend, and it includes the responses of said dignitaries (and I apologize for the poor quality scan–you can barely read it on the scorecard itself.)

My favorite is from the mayor of Milwaukee, Henry W. Maier, who, if he didn’t write this clunker himself, ought to fire the scribe who did:

Milwaukee, now more than ever before, is truly a “big league” city. Already we are becoming a city of Music and Fountains, and are on our way to becoming one of the most attractive cities in the world. Our skyline includes many new and important buildings. Our bulldozers are busy eliminating blight.

One of our fondest dreams is to some day have major league baseball returned to us.

Wow. City of fountains and important buildings and rubble. How can Major League Baseball resist? 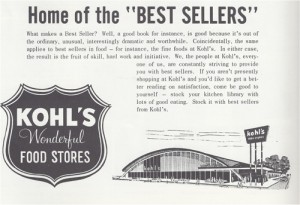 Then there’s this weird little advertisement located toward the back, for Kohl’s grocery store. This one makes me wonder if it’s simply the case that the Milwaukee area is bereft of decent copywriters.

What makes a best seller? Well, a good book for instance, is good because it’s out of the ordinary, unusual, interestingly dramatic and worthwhile. Coincidentally, the same applies to bestsellers in food–for instance, the fine foods at Kohl’s. In either case, the result is the fruit of skill, hard work and initiative. We, the people at Kohl’s, every one of us, are constantly striving to provide you with best sellers. If you aren’t presently shopping at Kohl’s and you’d like to get a better reading on satisfaction, come be good to yourself–stock your kitchen library with lots of good eating. Stock it with best sellers from Kohl’s.

Now, I have to admit that the Kohl’s grocery store itself looks like a triumphantly designed place. It’s gorgeous. But that ad copy! Somewhere along the way someone got fixated on their “classic book” metaphor even if it didn’t work–actually, many of us don’t want food that is “interestingly dramatic” or “unusual”. Some food, yes, but I’m not thinking milk and bread and steak and ketchup fall into those categories. Nothing is tantalizing in that paragraph, nothing makes you want to eat or buy groceries. And for a paragraph invoking good books, the text is so clumsy as to be laughable–”if… you’d like to get a better reading on satisfaction, come be good to yourself…?” Weird. 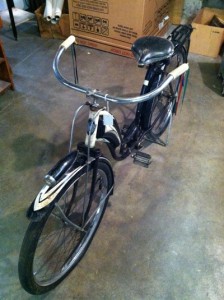 Saturday saw Holly and Janice and I fighting traffic (94 Eastbound was closed) to make our way to a beat up two story home in the Hamline-Midway neighborhood of St. Paul. This was the home of a collector of decent stuff, but again, nothing so great that I couldn’t pass, lots of little items that were either broken or overpriced, like the gorgeous Schwinn bicycle in the basement, priced at over $200.

This was also the home of the champion horseshoer, who had won pennants in 1953 and 1954, singles and doubles. A lot of the stuff was collectable–I’m sure the Baby Brownie is worth something ($20, as priced?) as was the stick of antique gum (!) but really, why would you keep it? Like that fabled (and annoying, in my mind) House on the Rock, this was a collection of collections, a dissimilar amalgam of material from another age, either stuff the person in question used or, being a nostalgist, had to have, an icon of a simpler time. 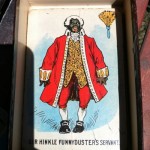 We bought a bunch of old scratch pads (there were literally dozens), and Holly bought some cards from a children’s book (including the racist card at right) and a table and chairs for her daughters (see below), I found some more postcards. I passed on the broken Minnesota Twins bobblehead I wanted to buy as a gift for a friend’s wedding, and this very strange 12-sided die that apparently you roll to see how your relationship with God is that particular

The rest of the sales were the same story–two had virtually nothing worthwhile (including that irritating garage sale), and the warehouse sale of a beleaguered local company had some cool buttons (like the Keystone Moviegraph Operator’s License for $20, right), but really, nothing we’d buy.

Like the House on the Rock, nothing we found had any provenance, any history. One of the frustrating things about that place is not the House itself (though that is a exquisitely annoying place), but the vast piles and piles of stuff, beautiful stuff, ugly stuff, broken stuff, baffling stuff. Alex Jordan, Jr., the brains behind that weird place, bought anything and everything–it’s once been accurately described as “the world’s largest collection of world’s largest collections.” While the sales this weekend were nowhere near the “world’s largest”, like the House on the Rock there was no provenance, no stories–the obits were elusive, and when they were written they had only the most miniscule information, survivors, etc.

This is the case every weekend, of course, but it becomes a lot more acute when you wander through the homes of strangers and gaze upon table after table of trinkets and come home with literally a handful of items. Considering we didn’t see a lot of people emerging with stuff, and considering one sale I went back to still had almost everything from the day before, that will mean that all this junk, this lifetime’s accumulation, will end up in a dumpster. Thus adding to the many stratified layers of history to be found in any landfill… 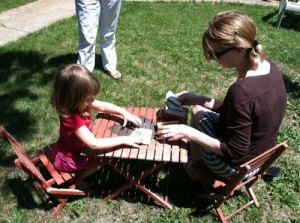 by Peter Schilling Jr. Posted on June 11, 2012
This entry was posted in Estate Sale Confidential. Bookmark the permalink.

One Response to ESTATE SALE CONFIDENTIAL: THE MINI MUSEUMS OF MINNEAPOLIS AND SAINT PAUL