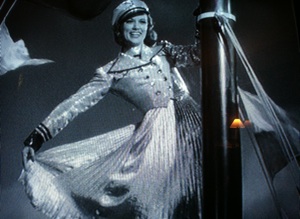 Broadway Melody of 1940, directed by Norman Taurog, written (if you can call it that) by Leon Gordon and George Oppenheimer, with help from nine other writers (including Preston Sturges). Starring Fred Astaire, Eleanor Powell, weird George Murphy, and the always wonderful Mr. Matuschek, Frank Morgan.

What can you say about Broadway Melody of 1940? My first response is to wonder why there’s no “year” movies today–where’s the Glee-like Tap Dancing Teens of 2012? (Not that I would want to see that.) Instead of all these sequels, why not call ‘em Vampire Lovers of 2011? Trainwrecking Transformers of 2010?

That aside, my other initial response is: how good can these movies be? After all, aren’t they just bizarre, episodic amalgamations of Broadway talent? Hoofers and vaudevillians strutting their stuff, connected only by the flimsiest of plots, stretched to a full two hours?

Well, the answer is yes. The answer is also Broadway Melody of 1940 is one hell of a lot of fun, so enjoyable and uplifting that I saw it twice, two days in a row, once at the Heights Theatre and once at home. And I could watch it again tonight.

What’s it about? We’re still going there, huh? OK, it’s about tap dancing, about billowy dresses, a number with some weird woman singing “Begin the Beguine”, a bunch of bell-bottomed sailors throwing a gorgeous woman around, a rivalry between pals, juggling, a unicyclist who can’t keep his balance, bill collectors, ermine coats, becoming a loser and becoming a star. Oh, and of course it’s about falling in love. There’s always some romance.

I suppose we should get to the plot since eleven–count ‘em, eleven!–men labored over the damn thing. OK: Fred Astaire plays Johnny Brett, a dancer at a seedy nightclub. His pal is King Shaw, played by George Murphy (more about him later, since he had a strange career.) Well, apparently this nightclub does this weird thing where people agree to get married there, with either Johnny or King giving away the bride on the dance floor, with the newlyweds then in the running to win a bedroom set or furniture or money or something (I know, it’s fucking crazy.)

Well, Johnny’s in hock to a number of debt collectors, one of whom has been poking around. After they dance to Cole Porter’s “Please Don’t Monkey With Broadway”, they, oh, hell, . No, I leave it here, and you go straight to YouTube since some jerk disabled it for others’ use. Whatever.

Make City Hall a skating rink,
and push Wall Street in the brink,
But please! Don’t monkey with Broadway!

That’s a playful moment, and a great way to kick things off. Just five minutes out of the gate you get Porter’s wittiest lyrics, and then an equally witty dance, a mock duel! So great. The two men work well together, though it’s interesting to see just how Astaire often smokes his partners–look how tight and effortless he seems, and while Murphy’s very good, he’s not quite brilliant.

Back to the story.. this review, actually, is pretty much how this movie’s written: tell your tale, stop to dance, put the needle back on the record where you left off. Anyway, producer/rake Bob Casey (The Shop Around the Corner’s Frank Morgan) is in the audience, sees Johnny as the better of the two, and wants to sign him for the musical revue he’s staging on the Great White Way.

But when he approaches Johnny, our man thinks the old dude is a bill collector, and says his name is King Shaw, and escapes. The old switcheroo!

Johnny takes off to go, coincidentally (and you had to see this coming), the very same show he was going to be asked to join. This is the wild “I Am the Captain” scene, our first taste of Eleanor Powell’s sexy Clare Bennett, Queen of Taps!

Wow. Were Broadway stages really that big in those days? I mean, you could land the Hindenberg in there and still have room for a Charleston contest.

I’ll speed things up a bit: Casey tells his partner, Bert (Ian Hunter, boring), about Johnny, whom he calls King (the mix-up, remember?), the real King goes in and grabs the gig, and though at first he’s sad Johnny won’t be sharing his success, eventually he becomes a drunk and a louse (we see doesn’t really work hard, loves to party, and wasn’t the brains of the pair–that’s Johnny.) King thinks Clare’s fallen for him, when really she loves Johnny. King gets drunk on a fateful night, Johnny takes over for him, King gets fired, Clare and Johnny get together and King is forgiven because he concocts the most ludicrous plot to make Johnny a permanent part of the show.

There’s a bunch of little touches, some of which are pretty funny, like the fact that Bob Casey loves taking young girls out on the town, and to entice them he “gives” them a sleek ermine coat which he then has to try and get back at the end of the night. But there’s also strange throwaways, such as when Bert and Clare’s budding romance just goes away. At one point Bert is jealous of King, and then we never hear of this supposed romance again, as Clare and Johnny come together.

And in the meantime, the story or stories are interrupted with a number of swell dances, but also with Trixie Firschke, known as “The First Lady of Juggling”, showing off her chops:

There’s no point to that scene except that the producers must have figured since they had Trixie under contract, might as well feature her in the picture. Later, a guy rides a tall unicycle past a diving Frank Morgan and into the orchestra pit. They probably signed a lot of talent back then.

(And I have to say that Trixie’s scene makes me imagine the great cliched Broadway story. I imagine the girl going from agent to agent, knocking on doors, juggling like mad, finally landing one, then the two of them barging in to every producer in New York… well, kind of like she’s doing in Broadway Melody.)

(Might I also add that I found the mean secretary terribly sexy. There’s a lot of nice things to look at in Broadway Melody…)

The movie culminates in the astounding “Begin The Beguine” scene, which my favorite critic, David Thomson, has said he would demand if he were ever locked in prison, satisfied to watch that one scene which he feels sums up perfectly the pure magic that is cinema. I can’t argue with him. But I won’t show it to you, because now I think you need to get this movie and watch it on your own. I wish I could’ve written this before it played at the Heights ten days ago, because that’s where you really should have seen it, with the rest of the delighted crowd, in glorious 35mm.

There’s a ton of talent here. After the show at the Heights, a few Powell fans told stories of her career, and one was that Astaire and Powell were both intimidated by one another. Powell is, indeed, a remarkable dancer (if a less-than-remarkable actress), and of course Astaire is Astaire. You can see that they kind of keep a respectful distance, rarely in any embrace but rather working in beautiful synchronization.

Powell may be a mystery to you, as she was to me, and that’s because soon after Broadway Melody of 1940 she went and married Glenn Ford, had a kid, and decided to retire. They divorced, as Hollywood couples often do, but by then she was all done in film, mostly because she became devoutly religious, and focused her energies there.

Did I mention her first major movie was George White’s 1935 Scandals? Damn, they sure had some great titles back then.

Then there’s George Murphy. He’s a mystery, too. Like Ronald Wilson Reagan, the dude was a handsome, though thoroughly mediocre, actor, head of the Screen Actor’s Guild, who went on to become a U. S. Senator in California for one term. Reagan called Murphy his “John the Baptist”, which I assume means that he paved the way for actors to go on to become serious politicians, and not that Reagan is akin to Jesus H. Christ, though I know many conservatives seem to think he is. Also, Murphy was defeated by John V. Tunney, whose meteoric rise was the basis for Robert Redford’s The Candidate. You just can’t make this shit up.

That’s the background, which in my mind only makes Broadway Melody of 1940 even more intriguing. Watch the movie, and you’ll see something wonderful, something astounding. Human achievement, even if it’s only in the name of fun. Today, we’re bombarded with machines having our fun for us. Where’s the dancers, the wit, the music? I don’t know, it seems as though it’s been swallowed by a CGI cartoon. What I do know is this: for a night of almost unrestrained joy, Broadway Melody of 1940 is my ticket.

Here’s the trailer, which is as loony and lovely as the movie itself.

by Peter Schilling Jr. Posted on November 30, 2011
This entry was posted in Lost in the Temple: Movies and tagged Broadway Melody of 1940, Eleanor Powell, Fred Astaire. Bookmark the permalink.