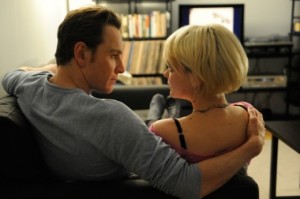 Brandon Sullivan (Michael Fassbender) walks around his stylish, nearly empty, blindingly-white Manhattan apartment with no clothes on. He refuses to answer the phone when his sister, Sissy (Carey Mulligan), calls, desperate. He goes to work in his high-powered job and he’s good at making deals. Before work, during work, after work, and on weekends, he is fucking, either himself, a woman, women, or, now and again, a man.

That’s Shame, not in a nutshell, but pretty much the whole kit-and-kaboodle. If the preceding paragraph seems to lack detail, well, you’re not going to get a whole lot more in the film itself. For Shame is not about people. It is, like McQueen’s prior effort, the gorgeous Hunger, a performance piece, divorced from reality, the work of an artist who seems not to understand people, much less “sexual addiction.”

The plot, such as it is, involves the arrival of his sister, Sissy, who is damaged. We know that because she has cut marks on her arms and bleached blonde hair with black streaks in it. She cries on the phone, desperately trying to win the love of a guy we never see. Later, in an excruciatingly long scene, Brandon and David head to a jazz club to watch her sing “New York, New York”. McQueen gives us five full minutes of this mediocre rendition, cuts to Brandon crying for God’s sake, supposedly as a way to show these people feel.

But they’re not people, and that’s a big problem in Shame. I cannot recall a movie so devoid of personal details. Who are these creatures? Brandon’s apartment has no character, but then, we never see what he does at his workplace full of Benetton models who seem to do nothing more than point at computer screens and shake hands with visitors. Even the jazz club is ridiculous–what New York club plays John Coltrane’s “My Favorite Things”? I mean, that could be the most overplayed standard in the world, the staple of every Starbucks. It matters because it reveals a director who is lazy about the world in which he places his characters, as if leaving the prison of Hunger has left him confused with all the choices of humanity.

I’m usually loathe to delve into the writings of other critics, but for the life of me I’m at a loss as to why Shame is being regarded as a movie about sexual addiciton. Compare it to Looking for Mr. Goodbar, a sad film about a lonely woman looking for love in all the wrong places. Brandon strikes me as similar to Diane Keaton’s Theresa, in this case it’s a man for whom sex is an intense high, a lonely man for whom the orgasm and the conquest drive him. But sexual addict?

Look, people, there on your wall: it’s a calendar. If I’m correct, your calendar reads “2011″. If you’re the type who goes to a Landmark theater and checks out movies like Shame, I’m guessing you’re abreast of recent developments in sexual understanding. Should this be the case, then I would hope you’re wondering as I am: why is Shame so damned prudish?

As I watched this stylish, empty movie unfold, I could not help wondering what planet director McQueen and writer Abi Morgan live on. The feasts of vanilla sex that Brandon engages in are only slightly more daring than what you see in any given Playboy, and would be rejected by Hustler for their tameness. Maybe you’ve heard of Dan Savage? Then you know that good people, happy people engage in riotous sex acts all the time. Whoah, his boss remarks on the whores and sluts discovered on Brandon’s computer! Holy cow, he does it with two women! My God, and this one might be hard for readers to take… Brandon actually has sex with a man. Shocking.

I was reminded, all throughout the picture, of a comedian on the Louie television show, you know, the one by Louis CK that has more honesty and humanity in one minute than this movie does in its entire run time (and I am being literal here.) A comedian whose name I forget is riffing on sexual addiction. His point is that fucking tons of women even when you’re married isn’t sexual addiction… hell, if you’re addicted to sex, you’re having sex with everything–dogs, cats, rotten fruit, anything.

Now, I’m not hoping to see Brandon begin to fuck dogs, though if you’re going to show an “addiction”, well, God damn it, it had better be hard to watch, because addictions are damned ugly. Then again, the cast–from Fassbender to Mulligan to the very beautiful Nicole Beharie–are profoundly attractive people. How much harder, how much more brave, would it have been to cast, well, say, Louis CK in the part? By that I mean a person who is not in possession of a hard body, who does not get his sexual partners so easily, who might not be so attractive to the eye when naked? Whose desperation, when he can’t find afford a prostitute or pick someone up, is to do something terribly demeaning, to the point where even that becomes routine, and things begin to get really ugly…

At one point in Shame, Sissy calles Brandon and leaves a message. “We’re not bad people. We just come from a bad place.” Unfortunately, no one thought to fill the audience in on that bad place, on what they’ve gone through, on anything. Shame could work if we cared about Brandon and Sissy, and in order to do that we need the gross details of their life, so that they become real. It could be sad that Brandon fucks everything, using this as a wall to keep himself away from people (his failure to screw a co-worker he cares about is nearly laughable in its falsehood), but in order to feel for Brandon we need to know him.

If that’s what you’re looking for in a film, then maybe Shame is right up your alley. But it is neither titillating or moving, not bawdy nor sentimental, nothing more than moving images of beautiful people pretending to have problems. Which is, in itself, a shame.

by Peter Schilling Jr. Posted on December 16, 2011
This entry was posted in Lost in the Temple: Movies and tagged Michael Fassbender, Shame, Steve McQueen. Bookmark the permalink.