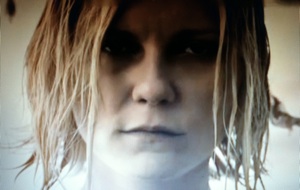 Lars von Trier’s new film, Melancholia, concerns the end of the world. Not “the end of the world as we know it”, but the literal end of the world–a planet that some scientist has dubbed “Melancholia”, that has been “hiding behind the sun” (do not even attempt to wonder if any of the astronomy is legit) has bounced free and is swooping near earth. Will it crash into us?

Oh, it fucking crashes all right. This is a Lars von Trier movie, so you can bet that this Goddam planet is going to totally smash into ours, causing any number of disturbances.

This totally dour flick arrives at the Uptown just in time for the holidays.  I can hardly imagine a film less suited to this season–what would you rather do, see a movie about families yelling at one another, infidelity, raging horses, terrible bosses, manic wedding planners, drunkenness, bootlicking, suicide and seas of self-loathing, or spend time with your family over dry turkey, NFL football, arguments over Michele Bachmann, plans over Black Friday shopping, and after all this jumping into the car and heading to the Mall of America to shop or catch a later show of Puss ‘n’ Boots and then…

Oh, uh, I guess Melancholia got here right on time.

The merits of Puss ‘n’ Boots aside, Melancholia is divided into three parts, one of which is brilliant, one of which is pretty damn good, and one of which is awful, and quite near stupid. Thanks to the abundant joys of the internet, I can give you the visually arresting Prologue featuring the music of Richard Wagner (from Tristan and Isolde), a beautiful series of near-still photos of the impending disaster, a prelude of the joys of destruction.

So incredible. I could watch that thing again and again. I might warn you, however, that none of that gorgeous entropy reveals itself later–we don’t see birds falling from the sky, horses collapsing, electricity from Dunst’s fingers, etc. What the Prologue does is erase any hope that your protagonists, or anyone really, will survive. They won’t. Deal with it.

Part One of Melancholia is called “Justine” after Kirsten Dunst’s depressed character. It opens with von Trier’s typical sweet sense of humor (God, I wish there of more of it): a stretch limo is stopping and starting, trying to maneuver the tight curves on a gravel road leading up to an exclusive golf course owned by Justine’s sister, Claire (Charlotte Gainsbourg) and her husband John (Keifer Sutherland, surprisingly good.)

Justine is getting married to Michael (Alexander Skarsgård), a handsome dope, and at first it seems like this is your normal newlywed couple–they take the stuck limo in stride, pausing now and again to giggle, stare deeply into each other’s eyes, and kiss longingly. That’s the end of the joy in Melancholia, however.

For they’re late. The wedding was at a church, the reception at this extravagant castle-on-a-lake that Claire and John possess. As the bride and groom arrive, Claire angrily points to a spot in the program where that night’s events should be, and where they are right at that moment, and they’re off by a couple of hours, with impatient guests waiting over cocktails. Justine, also known by her precocious nephew as “Auntie Steelbreaker”, which I have to admit caused me to snigger every time I heard that name (mercifully, not very often) shrugs it off–see, she’s beset with severe depression, so what does she care? But don’t worry, her mental illness is not real.

In fact, nothing in Part One seems at all real, and is peopled with some of the most ludicrous cliches I’ve seen in a good film. The girls’ mother (and man, is it a stretch to imagine Kirsten Dunst and Charlotte Gainsbourg as sisters), Gaby (Charlotte Rampling), is drunk and bitter, hates everyone, especially her ex-husband and father-of-the-bride, Dexter (John Hurt.) We know Gaby is bitter because von Trier has directed her to scowl like a petulant child in every shot–when she’s not doing that she’s making speeches about how marriage is awful and everyone basically sucks. Dexter is a louse who comes to his daughter’s wedding with two young girls named Betty that he enjoys groping.

Got it? Good. Oh, let’s not forget Jack (Stellan Skarsgård), Justine’s boss at an ad agency. He’s Michael’s best man, gives the toast, smiles gleefully, and then turns out to be such an odious character you wonder if name shouldn’t be Snidely Whiplash. We soon discover that Jack demands that Justine create a “tag line” for an advertisement, demands it by the end of the wedding. In fact, he tells his nephew, Tim (Brady Corbet) that he must get it from Justine before the wedding’s over, or he’ll lose his job with the same agency… uh, we he just got that day. Did I mention that Jack announces this in front of Justine? And gave her a promotion during his best man’s speech?

Justine runs away from the proceedings not once, but I think four times. I lost count. She hides, ignores her husband, gets drunk, dances, eventually fucks Tim, and forces Michael to leave her. As he does, he mumbles, “this could have been different.”

No, it couldn’t. That’s Melancholia’s great problem, namely von Trier’s misanthropy. His obvious loathing of people, evidenced throughout his oeuvre, is in full bloom in Part One. No one is redeemable, and the way he develops the plot, throwing these combatants together, simply makes no sense. Michael, Claire, and John must be idiots to have gone through with such an elaborate wedding that this lunatic sister/fiance would undoubtedly undermine. How does someone with such a profound mental illness thrive in her job? Why would her boss Jack, whom she’s obviously hated all along, even be invited to the wedding, much less be Michael’s best man?

And predictable! At the first introduction of Tim, and the little game von Trier set up (get the tag line or lose your job), I knew instantly Justine would be seen fucking him. Wait fifteen minutes… there you go.

Then we come to Part Two. Two is called “Claire” and concerns her attempts at righting her sister and managing her own developing mania as the rogue planet comes drifting into earth. Part Two is as peaceful as One is chaotic, as real as the first part was totally false. Keifer Sutherland really shines here, trying to be the solid footing upon which his wife can deal with her sister. He makes John a real man, not the moneyed hack we saw in Part One, but a wealthy man who actually cares for his family, even as he gets frustrated at times.

Credit, too, goes for the developing tension of the planet Melancholia (as dumb a name for something like this since Avatar’s ‘unobtanium’.) We see it, a small dot, growing into a big, blue, seductive swirling planet. John and the boy, Leo (Cameron Spurr), are seen racing around, carrying a big telescope to gaze at what they do not yet know is their impending destruction. What a lovely way to go.

von Trier gets all this right, down to surprising little details. For instance, I was totally charmed by Leo’s cool little astronomical toy that he made himself, merely a piece of pliable silver wire at the end of a stick that allows you to see if Melancholia’s coming closer or moving farther away. Place one end of the stick on your chest, and on the other, bend the wire to fit around the planet as you see it with your naked eye, put the stick down, wait five minutes, and then repeat–if the circle you made is now larger than Melancholia, it’s moving away; if it’s smaller, it’s coming closer.

We know what happens, but what don’t know is how this family will respond. von Trier builds the tension, with the continual sound of whinnying horses in the background, the sullen orb in the sky, electricity failing, shadows lengthening, so that by the end we’re back to caring for these people and finding ourselves moved by their doom.

Kirsten Dunst is the one garnering all the praise here, and I’m frankly baffled as to why. She’s good, but far from great, and her mopey performance grates on you after a while, to the point where I wished Claire would just go off someplace with Leo and wait to die in peace.

I also find it sad that I think von Trier is trying to make a lush metaphor for depression, but by giving Justine and Claire such an odious family in Part One, he’s trivialized both their deaths and the disease that affects their mood, as if the truly melancholic come only from maniacal families. They don’t. A bit of restraint would be perfect for the wedding, and if you think that restraint is antithetical to his style, well, how do you explain the perfectly restrained second half of Melancholia?

What I find so intriguing is that you could literally cut out the title cards, remove Justine’s part of Melancholia, and you’d have a masterful film. Short, but incredible. There’s virtually no reference to Part One in Part Two… in fact, I don’t think there is a single reference to the wedding at all. So what if there is? It could simply be a wedding that went awry, a reference to a bad moment in Justine’s past.

I don’t know that I recommend going to see Melancholia, walking out when you come to Part One, and returning in say, an hour. For starters, I think the good folks at the Uptown Theatre wouldn’t appreciate your loitering in the lobby during the show. Just watch the movie. On second viewing–and it deserves a second viewing–follow my lead: skip the awful Part One.

If it seems blasphemous to suggest slicing apart a movie of an artist as highly regarded as Lars von Trier (or anyone for that matter), well, that’s my prerogative, then, not yours. For Melancholia, as it stands, is a grating film thanks to horrible miscue in its first half, and a great, great movie in its Prologue and Part Two.

It is the end of the world, after all. I think I’ll choose which parts, and which people, I’ll spend it with. 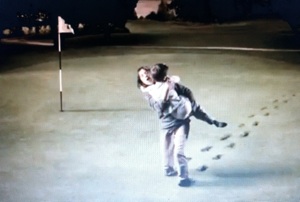 by Peter Schilling Jr. Posted on November 23, 2011
This entry was posted in Lost in the Temple: Movies and tagged lars von trier, melancholia. Bookmark the permalink.

2 Responses to WORLD WITH AN END, AMEN