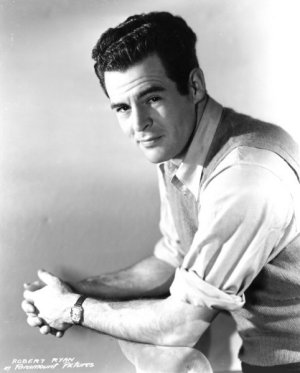 There he is, in Act of Violence, Joe Parkson, limping, gat in hand, desperate and obsessed with blowing away clean-living Frank Enley, maybe even taking Enley’s wife out in the process.

You can’t get that one out of your head, and then there’s Crossfire, and he’s Montgomery, the anti-Semite, a vile, vicious bully, who kills a man simply for being a Jew.

He was a womanizing projectionist with a mean streak in Clash by Night. The racist happy to beat a cripple in Bad Day at Black Rock, and the racist who’s just as eager to throw over his black accomplice in Odds Against Tomorrow. His men were cowardly, they were hateful, they were mean to kids, to women, to minorities.

But most of all, they seemed to hold a special loathing for themselves.

That’s Robert Ryan in a nutshell. Considered to be perhaps one of the kindest, most thoughtful actors in Hollywood, a dedicated family man who raised three kids (one of whom is a leading professor of Law and Philosophy in Oregon), who remained profoundly faithful to his wife until her death in 1972, Ryan–handsome, smart, accomplished–took the role of bad guy and made it special. For he seemed to know this simple fact about people: that cowards were often decent men thrust into situations beyond their capacities, that bullies were usually bullied mercilessly themselves, and that even the worst of us were once innocent.

The great producer/actor John Huston once said of Ryan, “[He's] a disturbing mixture of anger and tenderness who had reached stardom by playing mostly brutal, neurotic roles that were at complete variance with his true nature.”

From everything I’ve read on Ryan, he was certainly that: married to a Quaker and a pacifist himself, he fought in (and against) a war while playing soldiers. He was one of the few who rolled up their sleeves and took on the House Un-American Activities Committee and won. Whatever free time he could carve from a day filled with work and family went to battle for world peace, to stop the death penalty, to halt the proliferation of nuclear weapons, to decry racism and promote civil rights in America.

And all the while he perfected the very people opposed to all of these noble ideas. He wanted to be a playwright, but had to act in order to eat. So he acted. Like most actors, he took the roles given to him. At first, he played the jerks. So he perfected their frustrations, their hatred, their cruelty. He did it so well no one wanted him to do anything else.

Look at him, in any one of those roles, and you can’t sit comfortably and wait for the bad guy to get his due. Maybe it was his innate kindheartedness that made Robert Ryan give each and every villain a brief look of remorse, of regret, that quick flash of the man who once cared for people. And he made you realize that it takes only a flicker of fate, dark fate, to turn us into one of those villains.

It happened to him. It could happen to you.

This works wonders in Fred Zinneman’s Act of Violence. This is a brilliant noir, about a “good” man, Frank Enley (Van Heflin), a war hero who returns to America and begins a successful contracting business building homes to help the rush of post-war families. He lives with his wife, Edith (Janet Leigh), in a comfy place with a colic-y baby. But the good times cannot last, as Ryan’s Joe Parkson comes on the scene, walking with a severe limp, and stalking, stalking, stalking his man.

In this case, his target is the real criminal. While in a POW camp, Enley coughed up information to the Nazis about a prison break. Enley got to eat for his squealing. The rest of his outfit were slaughtered, but Parkson hid beneath bodies until he made his escape, going a bit mad in the process. Now his life has meaning: to kill the man who betrayed them.

Robert Ryan understood that evil men are often plagued with a warped, diamond-bright intelligence darkened by abuse. He knew that they were once men who had faith, who cared for people, and that something along the line destroyed those feelings. Not just destroyed them, but tortured the psyche until all that was good was ground into hamburger, and only the inhumanity remained.

In the short span of the length of a feature film, Ryan makes you feel as if you’ve known his racists, bullies, and cowards your whole life. The way you remember how they were once good men now turned reprehensible. Often it’s just a small thing: that glimpse of the real man, buried deep beneath the hate, that flashes across his face.

Here’s a scene from Odds Against Tomorrow, in which Ryan plays Earl Slater, a racist ex-con who ends up with an African-American jazz musician as a partner in a heist. Here, the frustrated Slater stops into a bar for a quick drink.

Slater’s not really to blame–the kid on the receiving end was the jerk. But he overdoes it, with one punch inflicting a blow that makes me cringe every time I see it. And yet the flash of regret (right about 3:11) is like a stiletto in the gut–he knows he’s wrong. You can also see that he wonders why he’s always so damn wrong.

Robert Ryan was sensitive, and yet he was a 40s and 50s-style man’s man, as eager to box or join the Marines as he was to be a painter, to write plays, to read poetry. He grew up in Chicago, but there’s not much out there to tell us how he ended up such a complex man. Were his folks meatpackers, teachers, streetcleaners, did they live a life on the edge of tragedy and violence, or did they eke out a hardscrabble living that was nonetheless enriched with love and affection?

What we have are the movies: Crossfire. Act of Violence. Odds Against Tomorrow. The Set-Up. On Dangerous Ground. The Naked Spur. House of Bamboo. The Dirty Dozen. The Wild Bunch.

No Oscars. Mostly ‘B’ Movies. And yet a career that I find as moving and impressive as any of the stars. Better, even. For it takes a brave actor to make bad men perfectly human. Robert Ryan was a brave actor, and from what I’ve read I’m guessing he was a truly brave man.

by Peter Schilling Jr. Posted on November 10, 2011
This entry was posted in Lost in the Temple: Movies and tagged Act of Violence, Odds Against Tomorrow, Robert Ryan, This Week's Birthday. Bookmark the permalink.