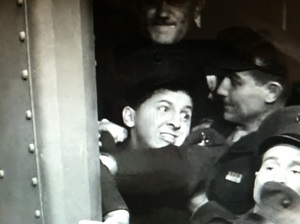 Was there ever a comedy as deeply honest as Preston Sturges’ Hail the Conquering Hero? The question is rhetorical. For here is a tale made and released when World War II was still white-hot, that skewers military worship and even the idolization of mothers, for gosh sakes. That makes people look like fools while acknowledging the genuine goodwill that exists in all of us. A picture about a small town gone crazy, while at the same time celebrating the inherent cozy joy of those little towns. A movie that is at once totally hilarious, then sends you reeling with its heartfelt emotion. In Hail the Conquering Hero, people are idiots, and thank God for those people. Without them, where would we be?

The story, like most Sturges’ pictures, is deceptively simple, the proverbial butterfly wings whipping a hurricane into being a thousand miles away. Woodrow Lafayette Pershing Truesmith (Eddie Bracken) sits forlornly at a bar, crying into his giant mug of beer. He’s depressed as all hell, for he can’t get into the military, especially not the Marines, where once his father served. His father wasn’t just some guy, no, he was Sgt. “Hinky Dinky” Truesmith, who fell at Bellau Wood in World War I, dying just as Woodrow was being born. See, Marine blood flows through the Truesmith clan, as even Grandpa Truesmith was a Marine in the Civil War, and never took his uniform off.

Woodrow was kicked out of the Marines for chronic hay fever. Couldn’t get into any other branch, either. Ashamed, he works at a munitions plant in San Francisco, telling his dear mother that he’s overseas in Guadalcanal, telling his girl he doesn’t love her so she can go off and be with another guy, maybe a guy who hasn’t got hay fever.

Well, six forlorn Marines wander into the same bar. They’re forlorn because they’ve lost their collective monies in a game of craps. Down to their last fifteen cents, they order one beer, six straws. Hearing this, patriotic Woodrow buys the men some beer, then some rye whiskeys and sandwiches. In wartime, fast friends are made on less generosity.

The Marine contingent hears his tale of woe. One, Bugsy (Freddie Steele), an off-kilter kid who never had a mother, is disgusted by Woodrow’s lie. Naturally, he calls Mrs. Truesmith, tells her Woodrow’s coming home, and with that, Sturges’ fantastic little machine begins to whirr.

The Marines, led by Sgt. Heppelfinger (William Demarest, always great), are going to slap a uniform and some medals on Woodrow, he’ll come home to mother, settle back into town, and that’s that. How hard can it be?

Oh, it’s hard, so damned hard. Because the whole town’s been waiting for Woodrow. And so he can’t just steal into Oak Grove, California and set the needle back on the same groove. No, it’s a whole new record.

Woodrow runs headlong into a hurricane of raised expectations. Literally hundreds of townsfolk, the people he knows and grew up with, are there to meet him. Not one but four different marching bands of various skills and sizes greet him thunderously, as does the crooked mayor, one Mayor Noble (Raymond Walburn), who looks like a bulldog and wrecks every sentence that comes out his cackling throat. Woodrow’s girl, Libby (Ella Raines), is now engaged to Noble’s dopey son, Forrest (Bill Edwards, a bit of a dud), but she wants her old flame back. A group of civic-minded men want old Doc Bissell, the eternal mayoral candidate, to step aside so that Woodrow can ride this wave and unseat the ever-victorious Noble. The good people of Oak Grove want parades, want speeches, want a statue of Woodrow, and they want a hero.

Oddly enough, a hero is just what they’re going to get.

Like his other movies, the propulsion of Sturges’ screwball comedies comes from his characters’ desperate urge to do the right thing, to take this crazy world and leave it in better shape than the one they were given. From director Sullivan hoping to reach out to the common man in Sullivan’s Travels, to the corrupt McGinty finding his heart and becoming a true reformer in The Great McGinty, to Woodrow’s yearning to be a Marine and come back home and give himself over in service to his community in any form, Preston Sturges was obsessed with the way life wreaks havoc with peoples good intentions, but also how those good intentions are really what make us human beings bearable.

And that’s what makes Hail the Conquering Hero so freaking remarkable–perhaps more than any of his other movies, Sturges builds a situation that careens so far out of control you wonder exactly how it can ever come to a conclusion that doesn’t destroy its hero, or leave you feeling cheated. If you’re like me, you get antsy, agitated, and you wonder, even if you’ve seen it as often as I have, how Woodrow will survive. And yet, as his world spirals out of control, you know there is only one solution, and it almost leaves you feeling sick: the cold facts, the brutal, yet beautiful truth.

Hail the Conquering Hero is a machine as delicate as an Atmos clock. I think that modern filmmakers would go too far in demonizing the town of Oak Grove, make the hero worship grotesque, the people stupid, foolish. Today, the cynicsm would cloak that town like acid rain. Attempts at showing respect for the military would no doubt devolve into treacly, patriotic bullshit, whereas Woodrow’s admiration for the Marines is heartfelt and often hilarious. Sturges has some dark moments: the night parades through town urging Woodrow to run for mayor look very much like lynch mobs. The people’s inability to hear Woodrow when he’s trying to tell them the obvious is frustrating, maddening.

But at the same time, it is the lessons that this small town has imparted on Woodrow, the care and concern his neighbors gave his family, that give him the strength and wisdom to deliver his crushing speech at the end, that make it all so much more exasperating–kind of like our relationship with our own community, no? For all his criticisms of this small town, Sturges leavens the gall with the sweetness of human kindness, for we see that he has a genuine respect for Oak Grove. This town genuinely loves Woodrow, and often times that love gets warped, as people hunger for direction, for novelty, for leadership. For a conquering hero.

This might be a spoiler, but you can see it coming: Woodrow tries to squeeze out of this horrible situation with a crazy scheme, and ends up abandoning it to tell the Godawful truth that he was, in fact, only in the Marines a month, that he never made it out of boot camp before that nose of his acted up. Pushed to the breaking point, he meets the town of Oak Grove in the city auditorium, and his words to his people are like opening a vein. At the roaring applause that washes over him, Woodrow’s true heroism is revealed:

You’d better save your hurrah’s for someone else. For someone who deserves them. Like Doc Bissell here, who’s tried for so long to serve you. Only you didn’t know a good man when you saw him. So you elected a phony instead. Until a still bigger phony came along, then naturally you wanted him.

This is the last act. The farce is over. The lying is finished. And the coward is at least cured of his fear…

In one of the great speeches in cinema history, Woodrow Lafayette Pershing Truesmith finds his soul, peels away the facade he never wanted in the first place, and tells the stunning truth. But he emerges as the bravest man in town, braver than the Marines who actually saw action in Guadalcanal (and who got him into this situation.) Sturges directs this scene perfectly, rarely leaving Woodrow’s face, and Bracken delivers his lines with such direct earnestness you cannot help but be moved. It is truly as if the actor grew up in Oak Grove, had a Marine father, delivered papers and milk to everyone on his block. Where Woodrow could have condemned his fellow citizens, instead he mildly chastises them, even as he expresses his deep love and respect for his neighbors, and his profound regrets at failing them. We see that love evident in every word he speaks on that podium, just as we see his disappointment at their madness. Love and hate, respect and disgust. Lots of laughs. And the uncomfortable but cathartic honesty.

Hail the Conquering Hero sends me through the ringer. After every screening I feel like the world’s screwy, and yet there’s people like Woodrow Truesmith to save us from ourselves. For that’s the battle that rages on in every war, and really, in every peace. How to be true, how to be honest. Hail the Conquering Hero is that rare movie, and even rarer comedy, that makes you walk out thinking that maybe you’ve got some work to do in your own community, in your own life. Watch it and marvel. 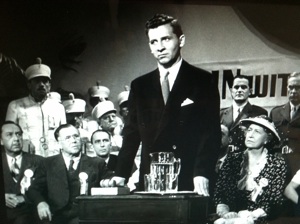 * The title of this entry comes from a remarkable show in the early 90s by comedian Rick Reynolds. Like Hail, its brutal honesty is both hilarious and hard to watch.

by Peter Schilling Jr. Posted on October 25, 2011
This entry was posted in Lost in the Temple: Movies and tagged Eddie Bracken, Hail the Conquering Hero, Preston Sturges. Bookmark the permalink.

One Response to ONLY THE TRUTH IS FUNNY*