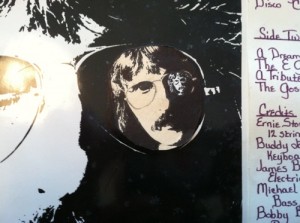 Though there were a plethora of estate sales this weekend, mostly in the St. Paul area of our Twin Cities, prior commitments and the urge to play some euchre interfered, and Janice and I didn’t actually hit all that many. A strange church sale in downtown, a small bungalow in North Minneapolis, a Bloomington split level, a suburban pad in Wayzata–these revealed only a handful of treasures, such as a Louisville Slugger, an old chair, a set of measuring spoons, and an original Gauguin.

Well, not quite the Paul Gauguin, but an original album cover by an artist who is channelling the spirit of that feisty Frenchman, or is the reincarnated soul of the man, I’m not entirely sure. In any case, visiting dignitary Mike Haeg discovered the work, buried in a pile of LPs, and walked away with a treasure that is both strange and intriguing. Which is part of the joy of estate sales, yes?

This weekend’s travels begin in Minneapolis, at the Augustana Lutheran Church in downtown. Mike and I were instantly excited about this sale, as church sales are often incredible, piles and piles and piles of amazing clothes, books, records, dishes, you name it. The denomination, conservative or liberal, doesn’t matter–church sales gather the detritus of their flock, and are usually well organized by the armies of volunteers these places summon. Both Mike and I have found great things at church sales, and were almost drooling to get at this one.

However, this church is apparently up for sale (and more valuable now because of the damnable Vikings deal?) and thus was going to razed at some point in the near future. So this turned out to be a church sale–as in, the stuff inside was stuff the church used, not the patrons of said church. So there were tons of books, but mostly bibles, biographies of Lutheran dignitaries, religious fiction, and tons of hymnals. There were closets full of those big felt banners you see in the sanctuaries and the rooms they teach bible school (see above, right), which was kind of melancholy in its own way (note the ‘d’ in ‘God’ is missing.)

And they liked to show movies. Lots and lots of 16mm film, with such fascinating titles as The Shopping Bag Lady, the Boy Who Liked Snow, and my favorite, Pardon Me For Living. There were also the items you would expect to find at a church: choir robes, old chairs, stacks and stacks of plates, one of those wooden, rotating chalkboards as big as a Ford Ranger (for ten bucks, already sold), and, in the game room, where I imagine the good people tried to connect to unruly teens and distracted youth, one of the most beat-up pool tables I’d ever seen–for whatever reason, the ’8′ ball was missing, certainly a metaphor, but one that eludes me at this point.

Mike found some board games, and a stack of hats he plans to use for an art project at the Walker Open Field this summer. But there weren’t any pews for sale. Not one.

Mike and I had time to hit one more sale before we both had our important business to attend to, and this was where he found the strange art. We drove out to Wayzata, to a fairly nondescript home of a gentleman in the advertising business, who apparently had guns, for I overheard not one, but two guys ask “still any guns left?” Sorry, no guns. But there were some records, and Mike always digs through the records.

I found an old Graig Nettles Louisville slugger–not a real one, mind you, but a good, solid “125″ version, which simply means it is made with the same strong wood they use for the majors. That was it from my end. 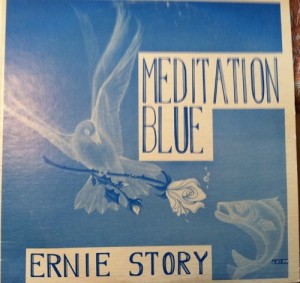 But Mike walked away with three albums, only one was not an album. Clutched in his happy grip was a cool Turtles LP and an album, Meditation Blue, by a local cat named Ernie Story. And next to it was the original artwork, by a dude named Peter Teekamp.

The album would have been enough to make your average digger happy. First, there is its actual cash value, which you wouldn’t think would be too much, and yet research shows that the damn thing fetched almost $300 on eBay–and that was the actual purchase price, not someone’s foolhardy starting bid.

But, as Mike said, “you don’t just have life toss you gold and dump it on eBay.” Turns out that Meditation Blue is a highly regarded album, especially on the soul circuit. From a review on a website called SoulStory.com, titled “Ernie Story: An Unlikely Discoteer”, a writer, mysteriously called “O.W” (Orson Welles?), states, of the song “Chain Gang“:

“Chain Gang” reminds me of Rodriguez’s soulful, folksy rock in one moment, but then it drops into a funkier, fuzzed out sound just a few beats later and then there’s that unexpected transition into “Disco City” as Story puts together what you might call a “garage disco” joint. 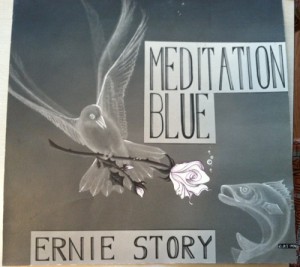 The gent who owns the home hadn’t passed away, but was apparently downsizing. He loved his music–there were scads of CDs, many of the DVDs were music related, and then there were the two rows of LPs. But why did he have the original artwork?

At the top of this article is a detail of Ernie Story’s eye, with an eternal reflection of himself going back to infinity, from the back cover, and, right, is the original art, which as you can see was shaded blue for the final album.

The artist’s name was one Peter Teekamp, and, it turns out, he was either a reincarnated Paul Gauguin, or shared a number of bizarre coincidences with the famous impressionist, so many that they give him valuable new insight that no one has ever understood! Or so his story, called “Pass It On”, suggests…

Whatever your belief (or non-belief) regarding life after death, and whichever term you apply: reincarnation, life after life, everlasting life, “Pass It On” is a story of two artists from two different centuries with striking parallels, amazing coincidences, and humorous ironies linking them together. The story has all the attributes of a great fiction classic, but it’s a true story and even the authors can’t claim creative rights over it. Technically, history already wrote this story, the authors are simply passing it on. 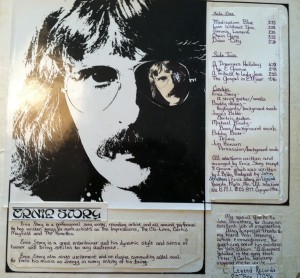 That’s from Mr. Teekamp’s website, where he goes on to show the numerous parallels between Mr. Gauguin and himself, from their work, to their time in a boarding school, to the fact that they hide their signatures in their work.

So it could be that Mike found himself the lost work of one of the great unheralded artists of our time! Or a guy who believes he’s Paul Gaugin reincarnated.

Either way, it’s a cool story. And now Mike has a decent album, a strange and forgotten piece that could someday be a part of the Numero Group’s Minnesota collection.

It would be damn hard to top that this weekend, and we couldn’t, and didn’t. Janice and I hit a couple of sales in Minneapolis and Bloomington, which amounted to a nice bit of nothing. Unless you count this pretty awesome autographed album by Liberace, which I didn’t buy (right.) Apparently, when Liberace gives an autograph, he doesn’t just have the time to write out his name, legibly, but to also draw a grand piano–a fucking grand piano!–and the Goddam candelabra. Dude had some time on his hands.

This little bungalow, home of a union man (The Drivers, Helpers, and Inside Employees of the Brewery, Liquor, Soft-Drink, Vending, and Spring Water Union), who also loved belt buckles 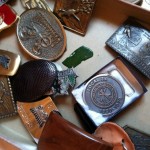 (there was a whole box, left), Roy Orbison, and the 1969 Minnesota Twins–there was one of the most beat up autographed baseballs I’ve ever seen. Pity, too, since it had the whole team, including Billy Martin (neat, but not worth the $150 bucks.)

So we emerged with some of the usual junk, and a neat little mystery. Where is Ernie Story today? Why did this Wayzata man have the original artwork from his album? And why does the artist in question think he’s the spiritual descendant of Paul Gauguin?

Does it really matter? It does not. What matters is discovering the stories. This was the last day of said sale, and in its final hours, and if we hadn’t gone through the church sale so quickly, Mike would never have saved Ernie Story from a trip to the dumpster. I’ll leave it to you to determine whether or not the spirit of Paul Gauguin led us to Wayzata. 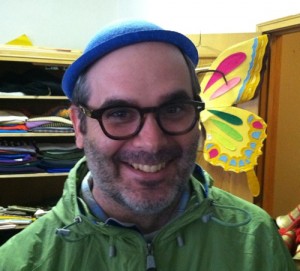 by Peter Schilling Jr. Posted on April 15, 2012
This entry was posted in Estate Sale Confidential. Bookmark the permalink.

3 Responses to ESTATE SALE CONFIDENTIAL: THE SOUL OF PAUL GAUGUIN