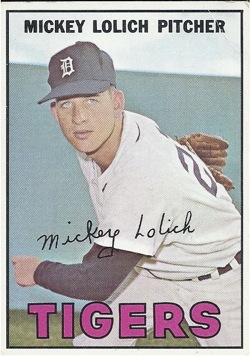 Today I invoke the awesome power of one Mickey Lolich, the Detroit Tigers’ 1968 World Series MVP. The “hero to the fat man” (as he thought of himself), won three games in that series, which was a nail biter to the extreme. The Bengals of ’68 were down three games to one, and came from behind to win.

Like this ALCS against the Rangers, the Tigers had their backs to the wall and had to win three straight–only one at home, the next two on the road. The game five ball went to Lolich; game six to our ace, 30-game winner and Hammond organ maestro, Denny McLain; game seven again to Lolich.

The Tigers won those three games, Lolich got three “W’s” (he’d won one already), and a trophy with his name on it. Probably got a bag or two of Coney dogs for his efforts. (Dude enjoyed getting foodstuffs from gracious Detroit restauranteurs, including a bag of Coneys when he wandered the city as a National Guardsman during the ’67 riots.)

Unlike the 2011 ALCS, the ’68 Tigers actually scored some runs in the games they won.

Look, this year’s edition has been playing some decent defense, but can’t seem to score. And as for last night’s 7-3 loss in 11 innings, how can I complain? If you’d have told me that result in advance, I’d have thought “Well, that’s a typical Porcello night.” I fully expected him to lose, and expected us to be down 3-1 this morning.

What sucks is that little Ricky P. threw admirably, exiting in the seventh with the game knotted at three. The Tigers wasted some opportunities, but they were also shut down by a Rangers club that was as tight and prepared as any club I’ve seen in a postseason. You can’t fault Leyland for sending Miguel Cabrera home from third in the bottom of the eighth on Delmon Young’s fly ball–Nelson Cruz caught it and threw a beautiful, curving shot right into Mike Napoli’s glove. I even barked out loud, “Delmon, just hit a fly ball.” He did. Cruz doesn’t make the throw and the Tigers win. That’s how it goes, sometimes.

I can’t even blame Valverde for coughing up the runs–it was his second inning, and he’s been used and used and used this postseason. He can’t help it if the Tigers bats’ don’t do their job.

If the Tigers had scored four more runs this series–two in game one, one in game two, and one last night–they’d have swept the Rangers and be heading to the World Series. Their pitchers have kept this Texas club from scoring a ton until the late, late innings–even then, it’s one guy, Cruz, who beats the tar out of ‘em.

They’re just not scoring. In this postseason, the Tigers have averaged 3.33 runs per game. They’re stranding guys on base and hitting for shit with runners in scoring position. Granted, they’re banged up: Young and Victor Martinez are battling oblique strains, and I guess Alex Avila, who had an .895 OPS with 19 HR during the season, had to catch nearly every game since Martinez ended up gimpy late in the season. He’s battling aches and pains and not hitting worth a God damn. Avila’s worn out.

And yet, and yet… the 1968 Tigers knew that, as good as the Cardinals were, they had to win one of three games against Lolich and McLain. So it goes for this series–I like that the Texas Rangers will not advance without beating Verlander, Scherzer, or Fister. Fully rested, I might add. Granted, they’ve done it before, and granted, those three could pitch brilliantly and we could still lose when we don’t score.

But at least we have some hope. Teams have come back from worse (think the Red Sox), and if there’s one thing I’ve got, it’s hope. That, and a pile of mojo.

Thoughts on the MVP: Personally, I think that Justin Verlander deserves the American League’s Most Valuable Player award. I make no bones about the fact that I’m prejudiced: I like Verlander, love the Tigers, and adore pitchers. Hell, if you said I had a choice between Miguel Cabrera and another pitcher who wasn’t a Tiger, I might actually go for the pitcher.

I won’t go into the statistical analysis about Verlander. That’s for other scribes, and besides, no one who casts a vote cares about what I write here. What bothers me is the whole debate over whether a pitcher should get the nod. That’s bullshit. If pitchers were not supposed to win, they’d have been written out of the award in 1956, the year the Cy Young came into being.

Last night, Tim McCarver addressed this debate, noting that pitchers hardly ever win the award, as if that somehow proved that it didn’t belong to them. True, the award has not been handed to a pitcher since Roger Clemens took it home in 1986, a good twenty-five years ago.

But let’s look at the award, shall we? Since 1956, the year the Cy Young was created, pitchers have won the MVP eight times, out of a possible 110 times (55 years, one per league.) That’s a tiny number.

However, shortstops have won it twelve times, and third basemen ten. That’s not a lot more. Catchers? six times. Second basemen? A whopping four times, half the number of pitchers (and when Jeff Kent won in 2000, it ended a 24 year drought.)

First basemen and outfielders win the prize more often than not, twenty for the first sackers and 43 times for outfielders, but of course they don’t divide by which field–it’s simply “outfield”, not “center field”.

So does this mean second basemen don’t deserve the award? Of course not. I’m just saying that there are rarer things in baseball than pitchers winning an MVP award.

As regards Verlander, I leave you with this logic, from a comment on some article I read earlier this fall (I have no clue where I got this and I’m not going to spend hours trying to find it.) The writer acknowledged that pitchers only play once every five games. But they also noted that they have to be great every one of those games. Miguel Cabrera, an MVP candidate, can go hitless 60% of the time, have a number of 0-5, multiple strikeout games, and still be brilliant. Verlander must be great every time, or he’s toast, and the whole club goes down with him.

by Peter Schilling Jr. Posted on October 13, 2011
This entry was posted in The Noble Sport: Baseball and tagged Detroit Tigers, Mickey Lolich, The Neurotic Tiger. Bookmark the permalink.