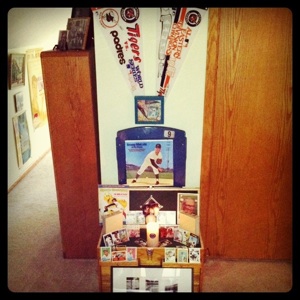 When I think back over this tumultuous season for the Tigers, I can’t help but wonder why it is that this particular year has had such a grip on my attentions. It’s not simply because they’ve won their division and are heading for the playoffs for the first time in half a decade. Don’t forget, the Tigers were a roller coaster earlier this season, trading places with Cleveland (of all teams) and seeming to do their best to throw away a weak division as late as August. Surely they were going to fold in September.

Despite that, I followed the Tigers passionately this year. And I’d be following them today if they’d bottomed out. This is a good team, perhaps a great team, with certifiably great players at the very least. But that’s not just what has made them great in 2011. What has attracted me to this sterling club is this: radio.

Outside of being at a baseball game on a brilliant day, there is no greater joy for me than listening to one on the radio. And this year my cornucopia spilled over with the fruit of Tigers radio. At the start of the season, I coughed up the twelve bucks to buy MLB At-Bat 11–the iPhone app that allows that wicked device to become like a little transistor and pick up the feed of every major league club.

Two things: first, this handy-dandy gadget allows me to finally listen to the Twins via the wireless. Covering the team and only getting press access to two games per homestand meant that my pocketbook needed another method of participation. Not having cable, this means I have to endure the aural horror of the Gordon/Gladden broadcasts.

Perhaps I shouldn’t bitch about soon-to-be-retired John Gordon, the Twins play-by-play man, but I am: the dude is terrible. He’s awful. Add Dan Gladden’s bizarre rants and epic flights of worthless banter and you’ve got what I believe is the worst radio tandem in baseball. (I have not heard every single team’s broadcasters–perhaps a dozen. But each and every one I’ve heard is superior by leaps and bounds.)

Gordon and Gladden are hacks, at least in the booth (I’m not digging on Gladden’s ballplaying.) The two of these guys go on silly tangents at the expense of play calling, to the extent that it ruins games. Over the years I’ve listened to these rubes yammer on and on about some barbecue lunch they ate at Mankato Harley-Davidson while the game was in progress. They interfered with the game, refusing to call plays while they laughed and giggled over all the pork they stuffed in their pieholes. I was going to write a City Pages piece about this weird phenomenon.

My goal was to tune into the game on the local station while simultaneously listening to the opposing team’s broadcast on At-Bat 11 and write about the results. My memory told me I was going to hear a shitty broadcast from the Twins, but I wanted definite proof. On Sunday, July 17 I tuned in to the afternoon game betwixt the Twins and the Kansas City Royals, listening to both broadcasts. Unfortunately for the experiment, Gladden had the day off, no doubt to ride the backroads of Minnesota on his hog. In the booth was Gordon and Chris Attaberry. The formidable trio of Denny Matthews, Bob Davis, and Steve Stewart called the Royals end.

Well, I was surprised to find that Gordon and Attaberry comported themselves well for the first two innings. Ah, but then there was the third inning, when into the booth popped Patrick Klinger, the Twins VP of Marketing. What the hell does he want? Well, he wants to tell Twins fans about this special 1991 Commemorative Bobblehead set that was going on sale soon, how you had to call this 800 number, and how this cheap novelty was going to improve your life in these troubled times. Gordon purred over this thing, sounding like he was drooling over the prospect of having those 25 nodding heads gaping at him from the comfort of his home. It sounded like a QVC broadcast.

Were it not for the Royals feed, I wouldn’t have been able to score the game, as balls and strikes were left unmentioned. “These are not your standard bobbleheads,” Klinger said, as the game went on behind these two fools. You could hear cheering in spots, but no mention of what made the crowds cheer.

Now, you might say that this isn’t Gordon’s fault, and to a degree that’s true. I believe, however, that most broadcasters with 20+ years of experience could probably tell management to go screw themselves if they wanted to bring a bobblehead salesman in during a game. Still, that aside, I’ve heard broadcasters from other teams have guys in the booth who had nothing to do with the contest on the field, and yet they still manage to break and call a strike or a ball or a grounder. Ernie Harwell did that fantastically, especially as he was regaling his listeners with a story from his rich past.

Gordon is a man prone to weak calls, to shouting “Touch ‘em all!” at every home run (and using that in ads later) as if there were no other way of calling a home run, of babbling incessantly when the game is on, or being a sycophant for Bud Selig or Tim Pawlenty or Patrick Klinger. He’s awful, and I for one will not miss him.

But, you might say, aren’t you just cursing the darkness rather than lighting a candle? Yes, yes, I am cursing the Twins fucking darkness because it should be cursed, since the Twins are hoarding various candles and flashlights as long as they keep Gladden on board and don’t get a decent team to handle these broadcasts. They’re out there. I know this because the Detroit Tigers have a pair themselves.

You may be forgiven for forgetting that I wrote “two things” and then began my rant, but the second part regards my deepening love of At-Bat 11 and how it has allowed me to come back to listening to the Tigers on the radio, even if that radio’s a phone. At first I thought I would hate Dan Dickerson and Jim Price, the play-by-play and color commentator, respectively. After all, they’re no Ernie Harwell. Who is, or could be?

But I’ve come to love these guys, really, really love them. Dickerson reminds me of Harwell’s old play-by-play man from ‘way back, Paul Carey. Carey was a straight-shooter, good with Harwell, a man who knew how to listen to his better (and no one’s better than Ernie.) So, too, with Dickerson. He’s got a nice, clean voice, asks pertinent questions of Price, which is what the play-by-play man’s supposed to do during the innumerable times when there’s nothing going on. He listens. He calls a great play, doesn’t have to gild the lily. Dickerson also calls home runs in various ways, and often allows his emotions to get to him at times. This is good, as long as it’s in moderation, and Dickerson restrains himself admirably. Homers vary from the simple “Gone!” to “Goodbye!” to “It’s a long fly, ‘way back… the Tigers win!” in the case of a walk-off. There’s no trademarked quip that can be used later in an ad.

Jim Price was a former backup catcher who got his ring with the 1968 World Champion Detroit Tigers. I love this guy–a smooth, clean voice, eager to tell stories that are totally pertinent to the game at hand, none of these rambling tales about nothing or next-to-nothing. Price (and Dickerson) seem to think that you really want to hear this game, and tell you information that augments your enjoyment. I also really dig how Price reads his advertising. At the start of every half-inning, the guys in the booth have to relay an ad of some sort, even though you’ve just finished the requisite three minutes of awful AM radio ads as the teams switch. But Price gets through his quickly. Oh, you can tell what he’s saying, but he seems impatient to get to the game, as we all are.

Both men also know Ernie’s secret: silence. Pausing throughout the broadcast to let the happy sound of the crowd at the ballpark come through. Perfect. Even if I’m no fan of New Tiger Stadium, I’m appreciating it now as a studio within which Dickerson and Price can spin their tales of bat and ball.

The professionalism of this pair pleases me to no end. It pleases me to listen to the Detroit Tigers while I cook, while I cut up buckthorn shoots by the street, while I tend the garden, or just sit in the front room scoring the games. It pleases me to plug my phone into my car stereo and take long drives through the Minnesota countryside and listen to Verlander pitch another gem. It pleases me to walk around with the game to my ear like some old fart with an ancient JC Penney pocket radio, pumping my fist as Miguel Cabrera drives in another run. It even pleases me to hear the cheesy ads about Detroit stores–Belle Tire, the Michigan Masons (?), the strangely effective ones about Comerica Bank, or parking at the Airport Park ‘n’ Ride. It brings me back to the state I love but will never live in again.

Nothing lasts forever. None of us, none of our heroes. Ernie Harwell had to go, and he lived a wonderful, long, beautiful life that he shared with so many people. I shared him with my Grandma, Aunt Mary, my Mom and Stepdad, Jim (my own Dad would have rather eaten the radio than listen to a baseball game.) Dickerson and Price have brought me back into the fold, because now they’re mine, in my home, here and now. The era of listening to the Tigers at my Grandma’s cabin with Mary and John and Ernie and Paul has passed. The new era of my listening to the iPhone while living here in Minnesota has begun–and with it, a fantastic season that resulted in that cardboard Central Division crown. Thanks to the miracle of these often terrible smart phones, I’m plugged back into the Detroit Tigers. And that’s a feeling I didn’t realize was so important to this foolish baseball fan.