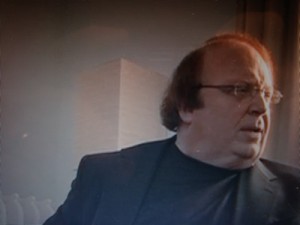 For the Twin Cities film community, Terry Blue was a fixture at theaters around town. You couldn’t miss him: red haired, moving at clip that suggested he had important places to go (he would probably say that your theater was the most important place at the moment), he would come in, pay for his seat, head into the theater to save said seat (which was always the same), and then return to the lobby where he would proceed hold court over the crowds of people heading in, or his small group of friends. Terry usually bought a Coke; always had a maroon briefcase stuffed with papers of some sort (probably including notes for his Cobalt Blue List, his top 30 movies of the year); and he could be counted on to have opinions–strong, strong opinions–on any and all movies currently playing, movies from the past, movies you’d seen, movies you hadn’t seen, movies you hadn’t heard of.

Terry Blue lived to see movies, but more importantly, he lived to see them in the movie theaters around town, to see them with other people. He was the quintessential moviegoer. Terry Blue died this past Tuesday morning. For the Twin Cities movie community, for those of us who work at the movie theaters, and who see movies at the theaters, he is going to be sorely missed, probably far more than he would ever have guessed.

Terry made the rounds of all the independent theaters in town, and also the Landmark chain and St. Anthony Main. I met him when I started volunteering at the Trylon. He’d hit our microcinema on Saturdays. Terry once asked Barry Kryshka to save him a seat on Saturdays, since he didn’t have a credit card to buy advanced tickets online. “Which Saturday?” Barry asked. “All of them,” Terry said, and his claim proved true–I can’t recall a single weekend Terry didn’t come to the theater, and that includes when we screened The Ninth Gate (Terry could, at times, be a glutton for punishment.)

He was a creature of habit: the 7:00 show was his gig, unless we had two movies, then he’d see both, and he always sat in the last row, aisle seat. He was a fixture at the Heights, the Riverview, and I discovered last year that Tuesdays were his day to see shows at the Edina. If he hadn’t seen any of the current crop, well, then he’d see four movies that day. In a row.

One Tuesday, I was going to see Sweetgrass at the Edina, when I ran into him in the lobby. As usual, he waved and said hello, and asked, “What are you seeing?” When I told him, he said that he’d seen it that afternoon, and then, as he was racing to get to his next picture, he turned and said, “Oh, and be sure to look for the scene that’s similar to Kick-Ass.” Before I could stammer out a “what?!?” he was gone. I sat through the whole of the quiet, subtle Sweetgrass utterly baffled, trying desperately to see a connection to Kick-Ass. (It had to do with foul-mouthed cowboys, as it turned out.)

Unlike most patrons, Terry Blue was a presence, and it was this desire to make moviegoing a social act that sets him apart from the crowd. This is not to knock those of us who like to buy our tickets and then head in, quietly and anonymously, to watch a film. But Terry, I believe, had multiple homes: there was the place he slept and for which he paid rent or a mortgage, and then there was the Trylon, Heights, Riverview, Edina, Lagoon, St. Anthony Main, and all the other picture shows he called his own.

He was a good host. We knew Terry Blue, because he made it a point to get to know us. He would engage other filmgoers, too, before and after each movie. At the Trylon, the difference was palpable: Fridays, no matter how crowded, were usually the same–people talking amongst themselves, buying tickets and concessions, heading in, watching the movie, and then leaving. Maybe a mumbled “thanks” on the way out. Nothing wrong with that.

But Saturdays! Saturdays, we’d open the doors, and there was Terry. After dropping his briefcase in his special seat, he’d pace around the lobby or sit on one of our uncomfortable little maroon chairs and ask what we’d seen lately, and go from there. If he overheard someone talking about a movie, he’d chime in with some appreciative comment, or an impossible trivia question. After the movie, it was more of the same, except usually he had a friend or two who’d made it to the same screening because Terry was there. Then he’d leave and it was back to the quiet. Without Terry, a movie went from a lively social event to group solitude that is often so much a part of moviegoing.

Truth be told, there were moments when I didn’t have the time or the inclination to listen to Terry, and I’d try to hide up in the booth. And there were occasions when I’d run into him at another theater, and I’d wave and be curt so that I wouldn’t have to spend the time talking to him–he loved to talk, weaving tales about this actor or that, this film or that, with politics folded in for good measure. He liked to argue, and, even better, he liked to win those arguments. But something about Terry always made me emerge from the booth or not shy away and ask him what he thought about a movie–which was a mistake if you wanted a brief conversation. He did have fascinating insights, not the least of which was that, for the most part, he loved nearly every film and could point out something great in almost every one.

The thing I know I’ll miss the most from Terry is his laugh. Especially at the Trylon, his laughter would fill the house. That first month we had a Buster Keaton series, and I was thrilled because he’s one of my two favorite filmmakers of all-time. My wife and I would go on Fridays, and I’d be working my volunteer shift on Saturdays. Right away, I wished it were the other way around–with Terry in the crowd, that whole theater would erupt in laughter throughout the whole movie. It was the same for every comedy. Terry was a writer’s dream, a man who just busted a gut at every funny line. I’d usually sit near him at the Heights, where his booming laugh was a bit muted by the size of the place. And yet, there was that little bubble he commanded, in the rear of the theater, on the left hand aisle, where his guffawing would reverberate and make the rest of us join in. It was amazing.

That was Terry Blue: moviegoer extraordinaire. I think that if you asked most people, they’d say that someone who goes to the movies as often as Terry did is essentially a lonely person. It’s a solitary act, right? Terry belied that claim. I honestly have no idea if ever watched a movie at home–I assume he had to, since his knowledge was so great, he certainly couldn’t have seen every film at the theaters in town. But even if he did have a DVD player or sat at home to watch Turner Classics now and again, it was his goal and his obvious pleasure to go to the movies, to engage with the people who also went, to make the movie theater his home and by extension to make all of us a part of his moviegoing family.

I don’t think it makes sense to say that Terry Blue is a more important figure in the local film scene than the filmmakers and their films. We all know and love Bogart, Kubrick, Bette Davis and Rita Hayworth, the great directors and the great stars of cinema’s universe. We see the movies and the movies go on, but we’ll all eventually disappear, while the movies will continue. That’s how it should be, really.

But it was people like Terry Blue who make seeing the movies in the theaters a warm and human experience, not a solitary act but an act of community. He helped make me realize that sometimes what is on the screen simply isn’t as important as who’s sitting next to you in the theater–wouldn’t you rather see The Ninth Gate with Terry and your friends than The Big Sleep by yourself? I would.

Terry Blue made the shows memorable, the way a dinner among good friends is memorable. For me, Terry and the people who love, love, love the movies are the reason I try to make sure we get the best movies at the Trylon, the reason I get so damn frustrated when I screw up projecting, or so profoundly happy when we fill the theater during The Navigator and I could hear that booming laugh, and the rest of the crowd following suit.

All I can say is, thank you, Terry Blue, for making the movies that much better. We’re really going to miss you on Saturdays.

Terry Blue had a brief part in Toby Jones’ short film, Detective Murphly and the Case of the Bloody Boy Body. He had been given a great line: “You’re like a terrible beehive filled with bones and blood… instead of bees.” Here it is:

by Peter Schilling Jr. Posted on February 17, 2011
This entry was posted in A Raging Gallimaufry: Everything Else, Conversations Real & Imagined, Lost in the Temple: Movies and tagged Terry Blue, Trylon. Bookmark the permalink.