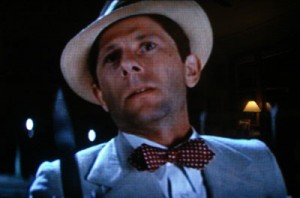 There he is, with his switchblade, talking about nosy little kitties. Roman Polanski, the unnamed assailant, emerging from the shadows. “Who’s the dwarf?” Nicholson’s Jake Gittes asks, nodding at Polanski. The nameless little man is startled, offended. So he puts the tip of the stiletto in Gittes’ nose and jerks it back, slicing open the nostril and sending a shocking spray of blood across Nicholson’s face.

For the rest of the movie, Jake Gittes will have a big white bandage across his face. It will make him stand out, it’s the sign of the fool, the man who thinks he can get to the bottom of the mystery. But Polanski knew. He knew that life is a little man with a stiletto, it’s a hero who fails, and that eventually we all find ourselves staring at the horror. And then someone says, “Forget about it. It’s Chinatown.”

Roman Polanski’s arrest last week in Switzerland has certainly brought a great deal of froth and proselytizing. I’ve heard (or read) people wish that they could send the dwarf to a very dark place, wish that he would be beaten, burned, raped, or lost in the dank hallways of some maximum security prison in a distant backwater.

Supporters claim that he has been tortured these many years, that his crime–which is rape, plain and simple, the rape of a young girl–was merely a reflection of a prudish society, was an entrapment by a gold-digging youth and her money-grubbing mother, was something he admitted to and would have paid for years ago were it not for some evil judge in Los Angeles.

That judge is now dead. The girl is older and seeking anonymity. The original prosecutor wants nothing more to do with the case. The new prosecutor… well, since the wheels of justice are grinding, I assume they want Polanski in the witness chair. Some want him in the electric chair. Others want him in the director’s chair, back home in Hollywood. But I’ll tell you this: it’s all there in Chinatown.

Chinatown is the great movie about Los Angeles, the greatest reflection of that city and the closest in mood to the novels of L.A.’s great writer, Raymond Chandler. It is about the menace that burns bright in the Southern California sunshine, about the undertow that pulls bathing beauties to their deaths, and makes every man, woman, and child who soaks up the sun complicit in every crime committed within its borders. It’s the city that people ran to in order to escape atrocities–like Auschwitz–only to discover that sometimes Hell is a sunny place with palm trees lining the streets like a firing squad.If you want to go deep into Polanski’s life, watch Chinatown.

For Polanski’s life was about menace. From the Nazi menace, which wiped out his family and nearly erased him from the face of this earth, to the Hollywood menace, when his pregnant wife was murdered by the Manson clan, and then later, when something warped and made him drug and rape a thirteen-year-old girl.

The Manson crime was probably the worst (if you can rank such things). I think we forget how awful that was–notice that it was so brutal that, even in this age of graphic horrors, no one has yet bothered to make a truly realistic film about the Mansons. We simply couldn’t stomach such a thing.

Polanski rose up the ranks quickly, moving from Knife in the Water to Rosemary’s Baby in six years, making some incredible films in the years between, from Repulsion to Cul-de-Sac. His childhood was so remarkably hideous that it is rumored to be the basis for Jerzy Kosinski’s novel, The Painted Bird. We know that Polanski’s mother was murdered in Auchwitz, and Bird is the story of a wandering boy who sees horrible abuse at the hands of Polish peasants (and much of that abuse is sexual.)

I wonder, then, how difficult it must have been to begin his film career in Poland, where so much trouble befell him. So he escapes to Los Angeles, both to further his career and perhaps to flee a place that held such terrible memory. But Hollywood didn’t treat him any better. So that’s his trajectory: from Poland, the land of abuses, to Hollywood, where souls are swallowed like quaaludes.

Look at Rosemary’s Baby, his first American film. It’s not that it’s scary, but it’s menacing. Attractive people don’t just commit murder, they indulge in spiritual cannibalism. He probably saw a lot of that.

Then there’s his masterpiece. Chinatown, you understand, would have sucked without Polanski. There’s no two ways to say this–screenwriter Robert Towne has built a career off this film, a career full of mediocre to crappy movies that only serve to reflect a man terrified of moral complexity. His knowledge of Los Angeles contributed to what is probably the greatest MacGuffin ever concocted for a mystery, that of evil men diverting water to create the great city. Typically the plot device is forgettable–do we really care about the porn trade in The Big Sleep? (We do not.) For once, the MacGuffin (Hitchcock’s term for the thing that makes all your characters jump), was real, had historical meaning, and lent credence to this exciting story. Towne deserves credit for that great idea.

But his Chinatown was to have a happy ending. Gittes was to be a hero, a stud, who saved and then fucked his leading lady, driving into the sunset with the bad guys choking on his exhaust fumes. Imagine that last line, “Forget it. It’s Chinatown” if it were spoken loudly, through Nicholson’s weird smile, as he and Faye Dunaway ride off in the sunset. That was the original ending.

(A digression: Ask the Dust, perhaps the best novel of L.A. not written by Raymond Chandler, was adapted and directed by Towne. Like every film he’s had a hand in since Chinatown it is awful, eviscerated, sentimental, insulting.)

But Polanski knew better. Polanski was, in the context of Chinatown, brutally honest. What is interesting in light of everything is that, looking back over his illustrious and hideous career (both in film and as a citizen), we see that Chinatown could be as personal a statement as Welles’ Citizen Kane. And that everyone, from Jake Gittes to Evelyn Mulwray to Noah Cross is an extension of Polanski.

Examine: Gittes the egotist, the fool, believing he can make a difference. Evelyn a portrait of desperation, her life upended, raped, trying to protect and hold on to the one thing that matters in her life–her daughter–but who runs afoul not of her father, but Jake Gittes, and sees everything destroyed. And Noah Cross, whose hard life turned him bitter, greedy, calculating, and capable of very great evil. Like rape.

Last but not least there’s Polanski himself with the knife, slicing his hero’s nose, as if to tell us that nothing can be beautiful, there’s always a little man with a knife, hiding in the shadows. And how awful is the suggestion that evil permeates everything–mothers, daughters, grandfathers, hell, even the God-damned water. Jake Gittes must pause when he sees water coming from the tap, because he knows how much blood it took to get there.

Polanski’s career took a nosedive after Chinatown. I have yet to see The Tenant, but the rest of his movies lack passion, his skills as a storyteller diminishing to the point where in The Pianist we see a tale about a man who does nothing but watch the world go by. He survives, but only by hiding. Then again, perhaps that is itself a metaphor for Polanski’s life as a fugitive. 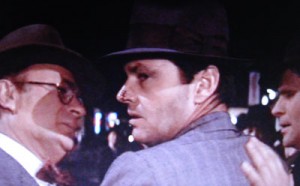 by Peter Schilling Jr. Posted on October 7, 2009
This entry was posted in Lost in the Temple: Movies. Bookmark the permalink.