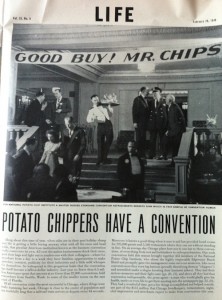 Well, friends, this was a miserable week in sales, nothing but a tight fist of five diggers sales so filthy and lackluster they only seemed to drive one into a miserable existential angst. The rest were clean sales, but not estate sales, nothing more than extra large garage sales full of overpriced furniture and $30 French press coffee pots.

So we’ll make this one brief, shall we? As usual, I scored a stack of well-kept Life magazines from 1949 and found, for your amusement, this insane article about… the 1949 National Potato Chip Institute’s Annual Convention in Chicago, Illinois.

Back in the day, before my time, conventions were huge. Of course, we have conventions today, but back in the day–when a lack of television and internet meant we entertained ourselves–they had thousands of conventions every year, over 22,000, if this article was to be believed. And where today we might find people eating crappy lunches, networking, trying desperately to remain awake during endless Powerpoint presentations, back then there were important business meetings that took place between hours of some really fucking bizarre entertainment, as if directed by the master of surrealism himself, Luis Buñuel.

Let’s start with this freaky hybrid of both work and play: 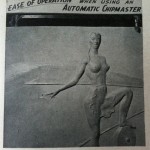 See, before the advent of machines, potato chips were hand made, perhaps by struggling men and women, sitting at long wooden desks, peeling potatoes and then hauling them to the deep-fryers. Not so in 1949! According to this loony bas-relief, things are easy with this Automatic Chipmaster, which is run by naked women wearing nothing but an apron. You’ll see in panel one, Lady Godiva standing with her breasts thrust forward, one long leg on a gear, and pushing a button with her elegant hand, which I assume is to make the machine start producing chips. In the next panel, she stands at a table, her privates protected by the tabletop as she is forced to use her apron to receive chips produced by automation. Finally, in the last and perhaps most, er, revealing panel, two nude, aproned women are bent over, scrubbing the machine with hot, soapy water to the no doubt enduring joy of overfed potato chip salesmen.

At least they’re wearing shoes in that last one.

“The meeting is fun, but it also helps the industry move ahead,” claims the Life piece. There were serious moments, such as this one, in which Mrs. Florence La Ganke Harris can be seen at a podium, angrily “rebutting against the slander that potato chips are fattening”, like a diminutive version of Krushchev banging his shoe on the podium. “We will bury you, pretzel lovers!” 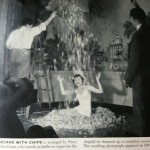 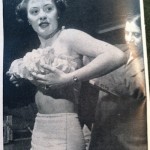 Finally, more sex, as we see this poor model, a woman named Pat Hunter, buried beneath a pile of greasy potato chips (left), for the fun and games of the assembled potato chip salespeople (who, in the other photos, look comprised of equal parts men and women.) Apparently, a guy named Sid Schechtman, a press agent, was “to the potato chip… what Omar Khayyam was to the jug of wine.” Whatever that means. In any case, he concocted the chip shower, left, as well as forcing this lady to wear a bra out of salty, crunchy, non-fatting chips. I’m sure that thing was as comfortable as the handfuls of pointy crumbs that went down her dress in the chip shower.

The point of this gathering of competitors seems to be to address the benefits of automation (with naked women), to blow off some steam (with booze and half naked women), and to have some fun. And if the assembled were trapped in the hotel, a la, Buñuel, at least they’d have plenty to eat… 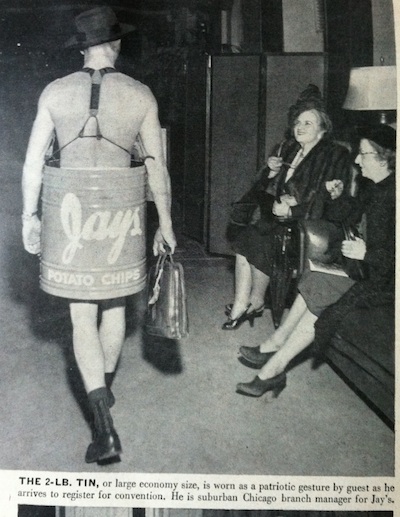 by Peter Schilling Jr. Posted on August 27, 2012
This entry was posted in Estate Sale Confidential. Bookmark the permalink.