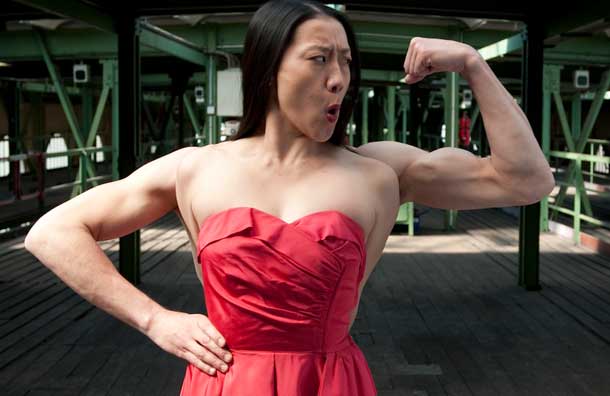 There are blessed and brief moments in human history where people gather to form an organic unit–a team, a company, a troupe–that performs wonders.  Often, the individuals didn’t know they’re special; often, they were not special, but thrived in the group, coming fully alive for the first time.

We watch, lucky to witness these spectacular convergences. And, oh, to actually be a part of one of these blessed aggregates! But that is too much to ask for, generally. So we must be content to bask in their sun-bright presence.

Over in Wuppertal, Germany, a sophisticated and cosmopolitan town of just under a half-million, there existed Pina Bausch and her dance company, the Tanztheater Wuppertal. And it was, and it is, a marvel, performing dances of such energy and inspiration you would not believe your eyes. Dances on a stage filled with dirt, water, stone, dances wherein the performers are blinded, chairs thrown about, people tied with rope, humans bent and shaped by other humans. Dances that capture the essences of love, hate, frustration, elation, despair, and grief.

Director Wim Wenders was no doubt one of the people transfixed by what he was seeing. He became a friend of Bausch’s, and ached to make a documentary about her work. But he knew deep down that simply shooting a live performance would only diminish the effect. Filmed theater is dull. So he waited, patiently, for the technology to catch up. And here we see what is perhaps the only saving grace of that bloated epic Avatar–with that 3-D technology, Wenders finally had the ability to show off Pina’s work in a way that would make the rest of the world stand up and take notice. They agreed to shoot a movie about the theater and her work.

But one week before filming, Pina Bausch was diagnosed with cancer. Five days later, she was dead.

Distraught, Wenders chose to abandon the project. But members of her troupe, many of whom had been with the company for literally decades (some of them had had children who grew up in the wings and later joined the company itself!) entreated Wenders to return to the project, to make a movie for, rather than about, Pina Bausch.

The result is Pina, and it is a film of such startling power and energy that I have literally lost sleep in the nights that followed last Tuesday’s screening, my mind battered as one might be by a crashing wave and the resulting undertow. Pina is not only one of the greatest cinematic expressions of dance I’ve ever seen–and I would literally rank it up there with the finest films by Gene Kelly and Fred Astaire–but it is as powerful a document on the creative process, on collaboration, and on the human response to grief, that I have ever seen.

There is no plot to Pina. Wenders wisely eschews the usual narrative structure, leaving behind the gross facts of Pina’s life–born here, died there, influenced by such-and-such–to focus on the dance. “Dance! Dance!” Bausch once cried. “Otherwise we are lost!”

We open with the “Seasons March”, a simple line of dancers, using hand gestures to communicate our connection to the seasons. A music critic whose name I forget once claimed that a part of Frank Sinatra’s enduring appeal is that his range was limited, and thus his songs could be sung easily by his fans, who then felt a connection with him. I thought of this as I witnessed the “Season’s March”, and how nice it would be to walk around one of our city lakes, performing Pina’s glorious paen to each chapter of the year like a holy fool.

The video cannot be shown at the moment. Please try again later.

The “Seasons March” is repeated throughout the movie, winding its way through the background as other, much more challenging dances unwind in the foreground. Wenders’ 3-D technology is never intrusive, instead augmenting each dance as if the people were wrapping their arms around you. Even during the credits, we see the outside of the Tanztheater, and the 3-D makes it look a bit like a model railroad set, a playground where Pina once played.

For Pina is a movie, and as a movie, its stage is the world.  Wenders, to the apparent chagrin of some dance purists, has expanded Pina’s dances to make them part of the fabric of his film. Longer dances are chopped short, and hauled off the stage and filmed next to the River Wupper, in the Skulpturenpark Waldfrieden (the city’s sculpture garden), and, perhaps most notably, around and on the Wuppertaler Schwebebahn, the floating monorail that runs throughout the city. The dancers bend and twist and play on the train platforms, in front of a McDonald’s, in and around the river, in a mine, leaping and falling and climbing. Crisp editing turns young dancers to old, camerawork makes a woman into a bodybuilding man, 3-D makes a the limbs of a body and the limbs of a tree become one. This is how we come to see the town of Wuppertal become an extension of Pina’s thought process.

Those dances that are kept on the stage, however, take on a whole new vibrancy here. From your seats, you would not get as close to the dancers as you do in Pina–and here you really get to see, and almost feel, how challenging these performances can be. In her version of the Rite of Spring, the stage is covered with three inches of peat, and the dancers move over it in great circular blobs of sweating humanity, only to break apart and fling themselves at one another. From the audience, you would not see how the dirt on the stage clung to the sweat on every dancer, and as Wenders’ camera comes close, so too does his microphone, and the gasping for breath of every dancer makes you feel almost winded yourself.

Pina made me want to leap and fall and climb, to embrace and spin with another human being, to gasp and crawl and spit. In my case, this is obviously a game of the mind, since there’s no way my body could catch up with even the oldest dancer. But that’s part of the joy of Pina, isn’t it? Everybody and his favorite critic fell all over themselves praising the “imagination” of Avatar, even though most of the scenes and most of the plot were cribbed from a million better sci-fi shows and novels.

But Pina–Pina!–my God, the imagination reels. From the shocking war of the sexes in her Rite of Spring; to the strange  and moving imagery in Café Müller, where two women dance with their eyes closed, a single man having to fling chairs and tables of the café hither and yon to keep them from tripping; to the contortions of the individual dancers pushing and pulling their limbs; and the few pairings, some of which are downright hilarious…

All of this speaks to Pina’s limitless imagination, and her ability to draw perfection from her troupe. Now we see that Pina is also a film about grief. Wenders intersperses throughout the movie very brief interviews with her dancers, but instead of the usual talking heads, we see a shot of the person, looking into the camera, or gazing downward, as their narration is heard, but their lips do not move. For some, there is no narration, just a plaintive gaze, as they are too overwhelmed by sadness to be able to articulate what she meant to them. And their silence doesn’t matter, for we see it in their eyes. And we see it, always, in their dance.

By avoiding the Wikipedia-like details of Pina Bausch’s life, Wenders shows us that Pina was so much more than a person who accumulated the usual facts and figures, but was someone who still lives in these dances. Pina has died, but in her troupe, in her dances, she lives on. Would that we were all be so lucky.

I have given you a few clips, in the desperate hope that they inspire you to race out and see Pina. And let me tell you, this is a movie that demands to be seen on the big screen, and in 3-D. There are some great contrasts that the 3-D captures perfectly, and speak to Wenders’ decision to avoid the usual narrative. Black and white, 2-D interviews with Pina are startling contrasts to the vibrant colors and eye-popping 3-D dances, and remind us that memory, like the black and white scenes, can go only so far. It is what we do–it is how we dance through life–that keep someone we loved alive.

So it is with Pina. As you can see, I loved this movie, and would love for you to see it, and have your life shine as mine did the other night. This film, for Pina Bausch, captures, more than any movie in my memory, the effect of one human being on others. Of how her dances can transform an audience, a people, and even a town. Pina reveals that even the most mundane tram ride is fragrant with the potential of magic. This was her gift to her troupe, to Wenders, to the world. And it can be a gift for you, too, if you choose.

Dance, dance, otherwise we are lost!

They even got the trailer right:

by Peter Schilling Jr. Posted on February 9, 2012
This entry was posted in MOVIES: Lost in the Temple and tagged Pina, Pina Bausch, Wim Wenders. Bookmark the permalink.

One Response to We Live, We Die, We Dance