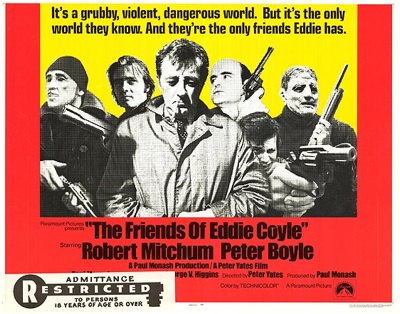 That’s how I would describe Robert Mitchum. Even when he was a maniacal beast, as in Night of the Hunter or Cape Fear, he appeared to be carrying the weight of the world on those massive shoulders of his. Mitchum looked like a man on the wrong side of the law: his eyes watery as if from being hung over or drunk and framed by large bags, his voice barely audible, his shoulders drooping, a look that indicated a thorough disappointment with the world and the people around him. Crime paid in Robert Mitchum’s cinematic world. It just never paid that well.

This was never so true as in the remarkable Friends of Eddie Coyle (recently released on the Criterion Collection.) Coyle is a strange movie, not really film noir, not really action, a crime drama in which there’s no mystery or surprise–just a sad, sober conclusion that you’d have to be a fool optimist not to see coming. And it’s a masterpiece.

The facts: Robert Mitchum plays Eddie “Fingers” Coyle, a small time hood, barely eking out a living in Boston. When the movie opens he’s peddling in guns. Coyle is not usually a gunrunner. In fact, he sells hot weapons, drives killers around, and hauls illegal liquor across the country, for whomever will pay him some cash. Not much cash, but enough to make him some dough to pay his mortgage and keep his children in their parochial school.

And he’s usually the guy who takes a rap–the police nailed Eddie hauling liquor, he wouldn’t squeal, wouldn’t cop a plea, and now here he is, facing five years in New Hampshire. Unless he’s willing to give a police officer some information, that is. See, Eddie’s getting old, tuition’s expensive, and he’s a bit horrified at the thought of his wife taking a job when he’s in the pen. So he decides to give up the man who sold him guns.

Of course, nothing goes right. It never does for guys like Eddie Coyle. This is one of the grittiest little movies I’ve ever seen, and though it’s nowhere near as stylish or assured as Gomorrah, I’d rank it up there in terms of films that make crime seem thoroughly unappealing. Eddie Coyle’s world is one of grubby bars, big piles of money that go quickly (and really aren’t so big when you consider how infrequently they arrive), hiding out in trailer parks devouring white bread, cramped apartments and old cars. His “friends” of the title are men who begrudgingly admire him for being a “stand-up guy” in the past, but cleary don’t give a rat’s ass whether he’s alive or dead today. If he’s got a buck, they’ll serve him a beer. No more, no less.

The Friends of Eddie Coyle was a flop in its day, which is no surprise, considering that it is a chore to watch, in the sense that it doesn’t move at a fast clip, but instead relishes exposing the numbing grind of the criminal life. Quentin Tarantino was certainly influenced: he took the name of gunrunner Jackie Brown for his movie, and so much of the dialogue has that rambling, Tarantino-esque joy in talking for talk’s sake. Consider this scene, a first meeting between Brown and Coyle:

Jackie Brown: I can get your pieces by tomorrow night. I can get you probably six pieces. I got more now but I promised some of this lot.
Eddie Coyle: I don’t know as I like that, buying from the same lot as somebody else. Makes me nervous.
Brown: Yeah, well, I understand…
Coyle: You don’t understand like I understand. I got certain responsibilities.
Brown: Look, I told you I understand. Did you get my name or didn’t you?
Coyle: I got your name.
Brown: Well, all right…
Coyle: All right, nothin’. I wish I had a nickel for every name I got that was “all right.” Look at that. You know what that is?
Brown: It’s your hand.
Coyle: I hope you looked closer at those guns than you did at that hand. Look at your own Goddamned hand.
Brown: Yeah?
Coyle: Count your fuckin’ knuckles.
Brown: All of ‘em?
Coyle: Count as many as you want. As many as you got, I got four more. You know how I got those? I got some stuff from a man, I knew his name, the stuff was traced. The guy I bought if for, he’s at MCI Walpole for fifteen to twenty-five. He’s still in there, but he had some friends. I got an extra set of knuckles.

Watching Mitchum, sucking pie from his teeth and drinking his cheap coffee, you get the feeling that he truly would like that nickel for every name he got that was “all right.” Coyle is full of strange little asides like that, in greasy spoons, roadside parks, and in the parking lots of discount supermarkets. Director Peter Yates, who made this and Bullitt and little else that was decent, assembled an amazing cast that really never found such decent work again, with the possible exception of Peter Boyle, who plays a bartender working both ends of the law; Steven Keats, who later killed himself, plays Jackie Brown with a nice touch of paranoia; Richard Jordan as the police officer who prods Eddie to become an informant and then clearly doesn’t care whether the poor guy lives or dies; and Alex Rocco as Scalise, a shady bank-robber with the game show host smile.

I loved The Friends of Eddie Coyle because it’s honest. There’s not a false moment in the film–its people are genuine, the settings are real, the love between Mitchum and his wife, who’s no trophy, are just part of a story that is touching, sad, and heartfelt, but never sentimental. The 1970s provided us with a ton of hard, realistic movies, but The Friends of Eddie Coyle ranks up there with the best. And Robert Mitchum… well, if you’re already a fan (and if you’re not, you should be), you can’t miss out on this incredible performance, perhaps the last great thing he ever did.

by Peter Schilling Jr. Posted on July 28, 2009
This entry was posted in Lost in the Temple: Movies and tagged Peter Yates, Robert Mitchum, The Friends of Eddie Coyle. Bookmark the permalink.