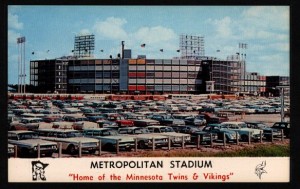 On a perfectly sunny day for a baseball game, as thousands of fans swarmed to the dust heap that is to be the future home of the new Twins Stadium, a good half-mile away a small but dedicated group of curmudgeons gathered outside Cuzzy’s Bar on Washington Avenue. They were preparing for their own little celebration.

“We’re geniuses, you know,” boasted Julian Loscalzo, chewing on a fat cigar and quaffing the first of many beers. “My good, personal friend Sid Hartman used to call us geniuses, back when he was all for the Dome,” he explained, his words punctuated by hoarse laughter. “We’ve proven him wrong by actually being geniuses.”

Loscalzo used to be a beer vendor at ball games and other sports events around town; now he works as a tour guide, hauling paying guests around the country to see outdoor baseball, and counts selling parking spaces at the State Fair among his many other occupations.

He is also the de facto leader of the Save the Met organization. This is the same ragtag collection of baseball cranks that tilted at windmills in the mid-1970s, hoping to persuade the Twins to remain at the scenic Metropolitan Stadium rather than move to the Metrodome. All these years later, Loscalzo and Co. are feeling a tad vindicated by the Dome’s impending obsolescence. Thus, a “We Was Right All Along” march down to the new stadium site was in order, replete with an old “Save the Met” banner from someone’s attic and well-preserved T-shirts bearing the same slogan, along with the likeness of the Twins’ old haunt.

Michael Samuelson (“Sammy” to friend and foe alike), was part of the original sturm und drang, going so far at one point as to vow publicly never to set foot in the Dome. “And I didn’t go for two years,” he claimed. But, he noted, his love of the game overwhelmed his principles—and besides, “if it weren’t for the Dome, I would never have met my wife.” Loscalzo shook his head. “I never made the promise that I wouldn’t go. I knew better. I’m a big fan.”

The “We Was Right” march didn’t amount to anything resembling, say, the recent Critical Mass bicycle gathering that sent not a few people to the clink for a long weekend. In fact, the Save the Met group kept to the sidewalks and their banner remained under wraps until they reached the construction site. Probably their only transgression involved chugging cans of Gluek beer in public.

Once at the site, the clan gave some weak cheers to other protesters who were unable to enter the ceremony, whose handmade placards read “Foul!” and “Corporate Welfare,” among other admonishments. Although the Twins security granted access to the Save-the-Metters, Loscalzo paused and considered, instead hanging the sign on a fence. “I don’t know if I have the stomach to go in there.”

Inside, there was little strife. In front of a large stage, a temporary diamond was set up, with actual Major League bases and thick swaths of deep green sod, all of which was surrounded by bleachers. Fans of every stripe were on hand, taking photos of dirt, eating dollar dogs and brats, and watching videos touting the new arena. Most of the crowd was suited up from a day of work, but there were also families in from the ’burbs and bicyclists galore—lines of bikes were chained to the fences. A few protesters stood on the Seventh Street overpass, trying desperately to get their message across; one sign read “Make necessary bridge repairs, not war.” But the amplified speeches by Twins alumni—not to mention the steady din of the garbage incinerator next door—kept their shouts from being heard below.

One fan, Willie Rauen, an elderly gentleman from Pine Island, was holding aloft an old seatback from Met Stadium. He’d yanked it out during the last game ever played at the Met, which happened to be a Vikings and Kansas City Chiefs game. “Some guy had a wrench, and I took my seat,” Rauen crowed. “Others went crazy. They took toilets!” The front of Rauen’s seat—Number 8, “by the first base side”—was autographed by various Twins from that era, including Harmon Killebrew, Tony Oliva, and Rod Carew; Rauen was determined to get the front autographed by current Twins when the new stadium opens. “This is a pretty good piece of history here.”

As Commissioner of Baseball Bud Selig began to speak—among other comments, he inexplicably suggested that the best thing about the groundbreaking was that it made Carl Pohlad smile—a chant emanated from the back of the crowd. “Con-trac-tion!” bellowed the Save the Met group, and this time they were joined by a larger crowd with still more beers. Loscalzo received hugs from a number of women. Someone blew a raspberry.

A man who looked very Wall Street shouted, “Give me a tomato and I’ll hurl it at ’im!” Finally, Loscalzo beamed at the small crowd that had gathered around him to admire the banner, which, he claimed, had been to the Baseball Hall of Fame. He toasted it with his Budweiser. “We made it,” he said, wearily. “Thirty fucking years.”