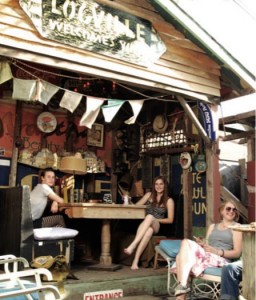 “I made this so that my daughter Ayla and her friends from Watershed [High School] could have a place to hang out,” said Phil Vandervaart of his “Logville Café.” The café is a sort of a miniature shed/diner amalgamation, a rec-room that ascended from the basement and set up in Vandervaart’s South Minneapolis backyard. Its walls, made of cast-off goods from his sign-painting job, are a testament to his faith in the re-use philosophy—as are the used chairs scattered around the fire pit and the giant spools used for fencing.

Ayla has since left home for college, but her friends can still be found at the café, nursing cups of Vandervaart’s strong coffee while lounging in salvaged wood booths from a long-gone diner.

The structure is partly sheltered by a black locust tree hung with a trio of vintage plastic rocking horses. As the tree ages, Vandervaart hopes the wood will envelop the horses, so that someday, if he has to cut it down, he might have an intriguing piece of art on his hands.

“We do three things with old stuff—turn it into art, use it, or burn it,” Vandervaart said. He knocked on an old sign, pulled from the set of Feeling Minnesota. “These old things deserve to go that way. They’ve served humanity well.”