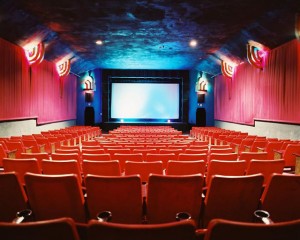 Local 219 of the International Union of Showbiz and Theater Entertainers was recently called to order over breakfast at the Edina Perkins. Bob Anderson, at seventy-nine still an imposing presence with broad shoulders and a strong handshake, pushed his omelet aside, pulled out some notes, and addressed his audience—myself and a waiter.

“There are about eight remaining union projectionists,” he explained. “Only a few of us are still working, and I’m the one with the most seniority …” He cleared his throat. “Which means I’ll probably be the next to go.”

It used to be that if you owned a movie theater, you relied on union labor to show the picture. Once upon a time, in fact, a person could make a decent living doing the work—in Fritz Lang’s Clash by Night, one of the characters earns his wages looping film late into the evening.

This is in stark contrast with today’s reality, where teenagers get your blockbuster rolling with little more than the push of a button. Anderson got his start as an apprentice projectionist back in 1947, and, before the rise of the multiplex, worked in literally every theater in the Twin Cities. He was on the staff at the opening of the Riverview, got the arc lights burning when the drive-in was king, and has had a hand in each of the twenty-four Minneapolis-St. Paul International Film Festivals.

From his perch in the booth, he’s watched the cinema’s transition from primarily black-and-white affairs to Technicolor and 70mm; he sat through the auteur movement of the 1970s, treaded Hollywood’s shallow waters of the 80s and 90s, and weathered the assaults of television, videotape, and DVD.

As a young boy, Anderson’s curiosity was piqued when he was given a toy projector with a Felix the Cat cartoon one Christmas. This was a simple, hand-cranked number with a light bulb, but he was instantly entranced. “Since then, whenever I see a movie I have to turn and admire the silver light from above,” he said. “I can’t help it.”

His passion grew over time, and throughout junior high, high school, and college, Anderson played the part of resident audio/visual geek. “You could find me hauling the projector and cans of educational films between classes. That was a lot of work.” After graduation, Bob entered the nine-to-five world, working for a local advertising firm and settling down with his wife and kids. But the bug never left him, so he would steal away to the local movie houses each night, determined to break into the insular world of Union projectionists.

It was a tight-knit community: You couldn’t just walk in and become a certified Union projectionist. There weren’t a lot of jobs to go around, and projectionists were famously reluctant to retire, so it was difficult to get a foot in the door to the booth. After a few months, however, Anderson was finally accepted into the union as a registered apprentice, shuttling between theaters. A projectionist had to know every machine, from the military green and imposing Simplex projector to the sleek, silver Philips Norelco.

Back then, the nitrate film was tricky and dangerous stuff, highly flammable. “The projection booths were like an Alcatraz jail cell,” Anderson explains, and it was his job to get the hell out if the thing caught fire—the booth, with its reinforced concrete, was designed to contain the blaze and keep the theater from burning down, at considerable risk to the poor souls inside.

While the story was unfolding on the screen, Anderson would be wrapped up in his work, cleaning and splicing the celluloid or maintaining the machines. In the early years, he found himself in the projection booths of dozens of different theaters, filling in for a sick or vacationing colleague. He finally landed a regular gig at the Lucky Twin drive-in, where he remained until the theater was closed and slated for demolition.

“People didn’t pay too much attention to the feature there,” Anderson admits. “It was necking heaven.” Once, a wiseacre rearranged the wording on the marquee’s traction board to read, “START YOUR FAMILY AT THE LUCKY TWIN!”

Watching Anderson work today is a clinic in professionalism—he handles his machine like a man who knows what he’s doing and has flexed this knowledge on an almost-daily basis. With a seasoned hand, he threads film, carefully oils his machine, and listens to the rhythm of the movie rattling through the reels for any odd sound indicating trouble. Recently, at the Bell, where he had been hired to screen a preview of an already-forgotten movie, Anderson seemed at ease in the overheated projectionist’s booth, which had the damp, dusty aroma of an old radiator. This was clearly the refuge of an organized man, with its oil-stained toothbrushes, film cutters, screwdrivers, and tools all neatly in place.

I couldn’t help but imagine all the masterpieces Anderson had brought to moviegoers over his career—fifty years is a lot of film history. When I mentioned all the time he’s spent in the projection booth, he nodded and said, “God, have I ever. See, there’s two of me—the guy with the nine-to-five job and the wife and family, and the projectionist. Everyone leads a double life—mine just happens to be up here.”